On a new episode of “Big Facts,” Yungeen Ace opens up about his mental health, getting “Who I Smoke” cleared by Vanessa Carlton, his newfound success and more. 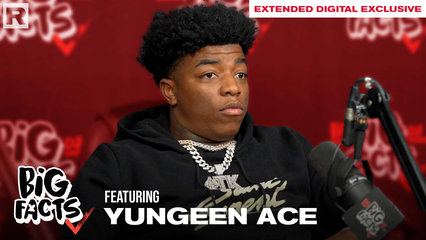 This week on the “Big Facts” podcast, co-hosts DJ Scream, Big Bank and Baby Jade sat down with Florida-based rapper Yungeen Ace. The 24-year-old opened up about his upbringing, dealing with tragedy and more.

In 2018, Yungeen, whose real name is Kenyata Bullard, was the lone survivor of a shooting that took place in the rapper’s hometown of Jacksonville. Three people, including the rapper’s brother Trevon Bullard, Jercoby Groover, and Royale D’Von Smith Jr. — all of whom were under 20 — were killed when a silver Chevrolet Cruze pulled up alongside Town Center Parkway just before 11 p.m. and opened fire. The group was out celebrating a friend’s birthday when the tragic incident occurred, and the “B.A.M.” rapper was reportedly shot eight times.

When questioned by Baby Jade about that night, Yungeen admitted to suffering from survivor’s guilt, noting that it was his idea to go out that evening. “I insisted, like, ‘Lil bro, let’s go out to eat or something. It’s your birthday.’ It’s my best friend’s birthday. I’m like, ‘It’s your birthday, let’s just go out to eat, ” the rapper recalled.  “My other brother, my closest brother — his name is Two-Time — that’s my closest one. I got eight brothers, so he my two — everyone got their one and their two — he my two that I shared everything with, and it’s just like he had just graduated. Like a week, two weeks before, they had just graduated. And then I’m like, ‘Let’s go out to eat, man, [and] let’s go have a good time.’”

He continued, “It’s something we don’t do. We cook. We don’t eat out. We in the streets — we know how to move like that. So, knowing the rules of the game, we just got caught slipping — [the] wrong time. Just lollygagging, man. Laughing, having too much of a good time.” Yungeen said that when you live a street life, there’s no problem with having a good time and enjoying life, however, sometimes it comes at a price.

He also admitted to suffering from symptoms of post-traumatic stress disorder (PTSD) since the incident, which include sensitivity to light and sound, confessing that it’s sometimes a battle to enjoy his success. Still, he believes he’s supposed to be alive.

The quadruple shooting involving Yungeen Ace was just one instance of the slew of gang-related, violent occurrences that run rampant in his hometown. When he asked what he thought would bring some peace to his city, the “Walk Away” artist suggested influence from artists like him and others.

“We can’t do nothing but just tell the story, though,” he began. “We really don’t be realizing that us as the influencers out of there, we really don’t be realizing the impact that we have on the young people out there who coming up.” Yungeen said he is open to finding a resolution to ending the violence because “I don’t want people to go through what I went through.”

He also opened up about his viral collaborative effort “Who I Smoke” with fellow rappers Spinabenz, Whoppa Wit Da Choppa, and FastMoney Goon. The song immediately found success in 2021 after sampling Vanessa Carlton’s piano-led 2002 cult classic “A Thousand Miles.”

“She cool. Like, we’ll talk. She’ll tell me what she got going on or, like, she’ll tell me she loves that song: ‘Like, I love that song.’ We just be vibing and talking stuff about careers and all that type of stuff,” he explained. “She a good person. I didn’t expect for her to be the way she is — how cool she is. But she cleared it. Of course, a couple of people were mad about that stuff, but she was cool.”

The 41-year-old singer-songwriter faced backlash following the song’s release due to the lyrics’ violent nature. However, Carlton quickly defended the decision to clear the song on Twitter, stating, “Popular songs accompanied by white violence or tales of white violence aren’t questioned. It’s considered visceral or cinematic.”

She also tweeted the infamous ear scene from Quentin Tarantino’s 1992 film Reservoir Dogs. Michael Madsen’s character Mr. Blonde tortures a victim by cutting his ear off while Stealers Wheel’s “Stuck in the Middle with You” plays in the background.

Popular songs accompanied by white violence or tales of white violence aren't questioned. It's considered visceral or cinematic. Here we have Stuck in the Middle of you playing while a guy gets his ear cut off. Reservoir Dogs pic.twitter.com/2qv3M2xLN6

Still, many critics argued the two couldn’t be compared, asserting that one piece of art was fictional while the record mentioned teenagers who died, noting that it was disrespectful to the grieving families.

There aren’t too many people Yungeen Ace is inspired by in the industry. He tells the “Big Facts” hosts, “Everybody comes from something different” and “Everybody got a different point to prove.” However, the “Opps” emcee praised industry veteran Yo Gotti, citing the Memphis native’s savvy business mentality and outgoing personality. “That’s somebody I can look at and be like, ‘Oh, yeah, he got a lot going [on],’ but it ain’t really too many people,” he added.

His latest album “All On Me,” which was released earlier this month, features several familiar names, including Kodak Black, Boosie Badazz and Toosii, just to name a few. However, the young artist revealed his interest in working with Grammy Award-winning Canadian stars Justin Bieber and Drake.

Elsewhere, he shared his 10-year plan, telling Big Bank, “By that time I need to be big like Drake … by the time I’m 34, I need to be on that Drake status but really, like, owning a lot of stuff, my own record label … I got my label going on right now, ATK.”  He continued, “Real shit, I really want to go back to my hood — not even just my neighborhood, around the whole city … put some apartments on there, and let people live for free. I want to own some shelter homes and stuff like that.”

After doing some research into publishing, contracts and things of that nature, Ace said he finally “woke up” and now has a better understanding of the industry he’s attempting to conquer.

The “Giving Up” rapper also explained what winning in the music business looks like to him, noting that it will come in the form of recognition and peace, which has been disrupted by a series of setbacks and tragedy.

“Growing up, ain’t really too much being really happy, and I’m talking about happy — I don’t have to worry about nothing without a care,” he explained. “I ain’t got to worry about the landlord keep knocking on a nigga door about the rent, telling you, you two months late. I want my momma real happy and at peace. I want a happy relationship, a happy family. That’s really just what I want. I just want to be real successful — I want some Grammys. I want all that.”

Listen to Yungeen Ace's new album 'All On Me'

Yungeen Ace is "Slipping Away" in new visual

Listen to Yungeen Ace's new album 'All On Me'

Yungeen Ace is "Slipping Away" in new visual