“When I first heard of Rod Wave, like way back… I’m listening like, ‘Damn, I fuck with this.’ I was posting buddy shit and all that,” Derez De’shon said. 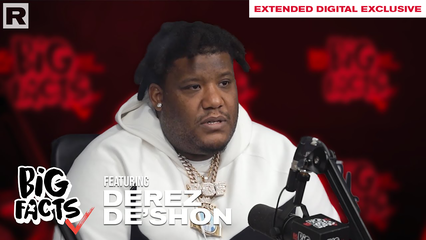 On the latest episode of the “Big Facts” podcast, hosts Big Bank and DJ Scream are joined by the multi-talented D-Bo, better known as Derez De’shon. The Atlanta based artist stopped by to discuss what he’s been up to lately, being compared to Rod Wave, and more.

A lot has changed for the “Fed Up” rapper who had his own share of troubles and restarts. Fresh off the heels of his latest single “All Them Days” featuring Morray, Derez appears to be taking a new approach to his artistry.

Taking everything he’s learned about the music industry since his inception as D-Bo, coupled with new business partners, Derez seems to be laser focused on applying his teachings to the newest chapter in his music career.

“I ain’t gone take too long. Like last time, the situation I was in, they was kind of stuck on the ‘Let’s ride this out’ thing. ‘Let’s see how much we can squeeze this,’” the rapper explained. “And I’m like, ‘Naw, it’s killing the momentum.’ But, like I said, that time it was more of a partnership where they had something to say. I had something to say and ultimately, we had to figure it out. But now it’s like, ‘This what I wanna do. This what we gonna do.’”

Known for showing full transparency through his music about battles with poverty and other life struggles, Derez revealed the inspiration behind his London on da Track-produced single “Fallin’” featuring Russ off his Pain 2 album, a track that best illustrates how he is comfortable with being vulnerable in his lyrics.

“I think, honestly, that’s what I was just going through — battling myself on the inside. With everybody having their different opinions on what I should be and how I should do, and I’m just battling myself,” the “Hardaway” musician said. “I really feel like now, today, that song, I made it in another state of mind, a different dimension, somewhere. But now, it makes more sense to me, now. Certain things I was supposed to do — I didn’t do. I did it wrong. I did it backwards. Now here I am, trying to double back and do it right.”

He continued, “So with that song, “Fallin,” I just feel like it’s me battling myself, off of knowing what I personally feel like inside and what I’m going through, talking to myself like, ‘Boy, you tripping. Get up. Work. Grind. Fuck these folks.’”

Elsewhere, Derez addressed social media’s Rod Wave comparisons. Wave has been said to cover similar subject matters as Derez and their musical styles favor each other — as heard on songs like Wave’s “Tombstone.”

The “Need Sum Mo” rapper applauded Florida artist’s talents and said though they haven’t gotten a chance to collaborate, he “can’t wait.” In fact, Derez said he loves hearing his influence in songs by other artists.

“When I first heard of Rod Wave, like way back… I’m listening like, ‘Damn, I fuck with this.’ I was posting buddy shit and all that,” he added. “I done finally meet somebody who on the same level as I’m on in this shit. I been fucking with it.”

Derez’s journey in the music business hasn’t been easy and the 36-year-old isn’t shy to admit that he’s had some regrets, including, “Listening to niggas telling me how to do what I need to do.”

The artist said taking the advice of others ultimately tarnished personal and business relationships for him. “That’s why I feel like I regret it because that was just hate, but I couldn’t peep that shit and the only reason I listened was because of the loyalty that I had,” he added.