Rubi Rose thinks gang culture is cool: "I like throwing their gang signs up -- it's cute"

On an all-new episode of “Big Facts,” rapper Rubi Rose talks dating in 2022, making over $1 million on OnlyFans, gang culture and more. 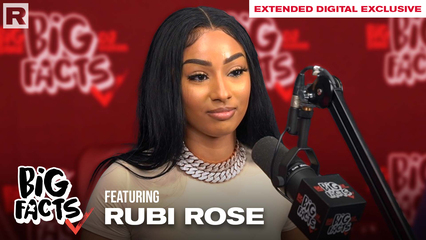 DJ Scream, Big Bank and Baby Jade return with another episode of the “Big Facts” podcast. This week’s guest was none other than rising emcee Rubi Rose. The 24-year-old rapper initially gained fame following her appearance in the music video for Migos’ 2016 smash single “Bad and Boujee.” Since then, she’s garnered attention for her musical talent after releasing tracks like her 2019 single “Big Mouth,” which eventually led to the rising star landing a spot on XXL‘s 2021 Freshman Class.

The “I Like It ” emcee stopped by “Big Facts” this week to discuss her musical influences, claims that she’s gang-affiliated, dating in 2022 and finding success on OnlyFans.

Though relatively new to the rap scene, Rubi Rose has already found herself at the center of several controversies on social media. When asked how she manages a growing music career while handling being a frequent trending topic, the young star was ready to clear her name.

“I’m a regular person. People act out of emotions and will want to defend themselves,” the burgeoning rapper explained, noting that incidents she’s previously found herself in occurred when she was younger. “Now I’m older, and I know my influence.” Multitalented Rubi is more cautious of her digital footprint now and what she decides to engage with online, telling the “Big Facts” trio, “Now, I just dead that shit, and I don’t really respond back to that shit as much.” Rubi believes online squabbles aren’t really all that necessary. “Like, does this person deserve this attention?” she asked, adding, “And lots of times people just want you to respond back.”

The conversation turned intimate as the “Pretty MF” rapper shared her personal preferences when it came to dating, stating that she prefers a man whose income is higher than hers. While admitting that she would in fact date a man who makes less money than she does, Rubi brought up veteran rapper Nicki Minaj and her marriage to Kenneth Petty in the process. The young star said there’s room to negotiate if a man isn’t the breadwinner, stating, “We can work it out.” “I will help, of course, but I don’t want to be the man in the relationship, but I will — I see Nicki Minaj is happy,” she continued.

Rubi would later clarify her statement via her Instagram Story, after receiving backlash for mentioning the “Beam Me Up Scotty” emcee, writing, “I just be talking off the top of my head … I gotta chill. I never intend to be shady or mean [though], so cut that, please.” In an IG comment section, Rubi added, “I didn’t mean it in a disrespectful way at all. I was just saying you can be happy with a man who makes less than you. I’ll say Britney Spears next.” On the podcast, she listed the Queens native as one of her many influences, along with Grammy Award-winning rapper Doja Cat, Cardi B and Former First Lady Michelle Obama.

Being a woman in the music industry is challenging, especially when we’re talking hip hop. Later in the interview, Rubi opened up about some of the factors that have often made her reconsider her career path, including the recording process. “While I’m recording, if it takes me a million times to get something. And if I have a bad studio night or a bad performance and, like, the crowd is really dry, and I see mean comments. It be a lot of stuff,” the rapper explained before adding, “But everybody has tough shit going on in their lives.” Rubi acknowledged her unique position in life, noting that “Everything good. I’m in a blessed position.”

The promising emcee has also achieved success with her OnlyFans account thanks to her highly sought-after steamy content, which has since afforded her other opportunities within the industry. However, Rubi says that, to her, success in her music career would look like “sold out shows” with “everybody knowing the words,” adding, “Or plaques or being on the Billboard charts … Grammys and things of that sort.”

Earlier this year, Rubi released the visual for her single “I Like,” and she is currently working on the follow-up to her debut mixtape For The Streets, which was released in December 2020. The project, titled Suburban Hood Bitch, will look at the many sides of the Kentucky-born, Atlanta-raised entertainer.

During the discussion, the “Loyal Dick” rapper revealed that despite her online persona — which has often seen her sporting the color red and throwing up hand gestures traditionally affiliated with Blood gang culture — she is not an official member of any gang. “I’m not actually a gang member. I know that’s kind of like a joke on the internet,” Rubi admitted, though she has been influenced by the culture in some ways. “I was around gang members, and I just like throwing their gang signs up because it’s cute. I love the color red. I’m in no way a gang member, though.”

When Scream warned her of the dangers of perpetrating false connections to gang life, Rubi elaborated further. “My real name is Rubi Rose,” she explained when Banks noted “rose” was also a slang term used by Bloods. Rubi also claimed that red has always been her favorite color. “Then I moved to Atlanta and I started being around, like, bloods,” she added.

The “Single” rapper, whose mother is a dentist and father a successful lawyer, said she found the culture to be “cool” before noting, “I know what be going on isn’t cool, but the colorful clothing and the hand signs — just being cool with the music. That stuff. That stuff is cool to me. I hadn’t seen that before.” Still, Rubi confesses that if she ever found herself in a gang-related situation, she doesn’t know how she would react. “I hope I don’t ever be in that situation,” she told the hosts.

Rubi Rose brings the heat in new "I Like" video

Rubi Rose brings the heat in new "I Like" video