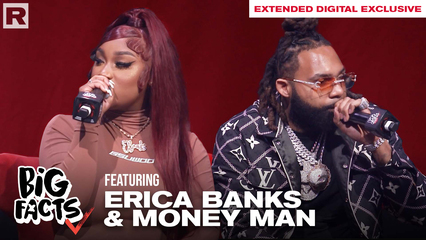 Big Bank, DJ Scream and Baby Jade return with a sizzling live episode of the “Big Facts” podcast, featuring two special guest appearances this week. First up, rapper Erica Banks stopped by to discuss some of the challenges she’s faced on her journey to stardom, her father’s thoughts on her music and getting unfollowed by one of her biggest influences, Nicki Minaj. Later, Atlanta-based emcee Money Man joins the group for a discussion on building income, cryptocurrency and more. But, first up is Erica Banks.

Fans were introduced to the Texas native in the early months of 2021 when her single “Buss It” went viral as a part of the #BussItChallenge on TikTok. Banks had released the track, which samples Nelly’s “Hot In Herre,” a year before it rose to acclaim. Celebrities across Hollywood, including Jordyn Woods, Chloe Bailey and Gabrielle Union, joined in on the dance craze via social media.

When asked what’s been the most challenging part about navigating her newfound stardom, Banks said, “Just being a woman. You know, you gotta deal with people just thinking that you’re stupid or trying to get over or taking advantage and shit like that.” Still, the burgeoning star said being a woman in a male-dominated industry does have its “good parts.” “We’re still women, so we still run the world and at the end of the day, it’s just going to be what we say,” she insisted. “We just gotta stand a little harder on how we feel, that’s all.”

In April 2019, the “Toot That” emcee signed with 1501 Certified Entertainment after playing her breakout hit for the label’s CEO Carl Crawford during an Instagram Live session. The former Tampa Bay Rays baseball player has also signed other female acts, including Grammy Award-winning star Megan Thee Stallion who sued the music executive in March 2020, claiming her contract was entirely unconscionable and she was being stopped from releasing music.

Banks told Baby Jade that another artist’s business dealings don’t affect or concern her. “I feel like every situation is that person’s situation, so I didn’t base that on my decision,” the rapper said, referencing her choice to sign with Crawford’s label despite his ongoing legal matters with the “Savage” emcee. “So, of course, I took the right steps that you’re supposed to take legally when signing a contract — but hey, that’s just what I decided to do. I didn’t have any thoughts like, ‘Oh my god, I don’t want to do that because I saw this happen.’ What’s for me is for me.”

The “Do What I Like” emcee grew up in the DeSoto town of Dallas, TX. She was a nursing student at Texas A&M University-Commerce but later dropped out to pursue her music career full-time. Banks shocked the hosts when she revealed that one of her biggest supporters has been her father, who is a pastor.

“He loves my music. He’s like my biggest fan, surprisingly, and him and my mom go back and forth competing with who knows more words,” she shared. The rising star admitted her father was “more supportive than I thought he would be” because “he’s a man of God, and what I be saying is not of God.” She added, “But you know, it worked out. He’s like my biggest fan. ”

Banks, who began writing her own raps at the early age of twelve, told the “Big Facts” podcast that her musical influences include Queens native Nicki Minaj and legendary emcee Missy Elliott. “Growing up, I watched a lot of Nicki Minaj, a lot of Missy Elliott, and I was always mesmerized by them just being girls and doing what I seen the boys do,” she revealed. “So, it inspired me like, ‘Damn, I wanna be like them.’ They were my biggest inspirations growing up, and they made me really want to rap,” she went on.

Sticking on the topic of the legendary rappers, Banks took the time to set the record straight regarding reports that Nicki unfollowed her on social media. According to Banks, Nicki seemingly took offense after she liked a tweet that accused the New York icon of only working with minimally skilled artists.

“I commented, and I said I agree that Nicki kind of fuck with the girls who can’t really rap — when you got the girls … that really do,” Banks admitted. “Now, some people might get mad at me for saying that, but it’s the truth. Everybody can’t rap.” Banks maintained that she makes the statement “not because I’m a rapper. I’m saying it because not everybody’s going to say it.”

She said her beliefs appeared to bother the veteran artist, who’s often shouted her out and supported her work on social media. “My feelings was so hurt,” the young star confessed. “And I had to explain to everybody — we not saying that we are ungrateful of Nicki Minaj’s support, we just saying our feelings are hurt as a real fan that we haven’t worked together.” Still, the “Squirt” rapper said she loves the “Chun-Li” emcee.

Banks believes the media tends to instigate female rap feuds more than it does male rap beefs. “It’s more entertaining when it’s women,” she said. “People want to see that. It’s catty, and it’s stupid, and everybody wants to see us get into it. I don’t know why.”

Next up, the group was joined by rapper and entrepreneurship advocate Money Man, who immediately began spilling gems for individuals looking to earn multiple streams of income. “I would just say you need to motivate yourself to get up and get a bag. It ain’t no point of just being out here being broke,” the “24” musician stated. Money Man pushed the importance of networking and being aware of the connections you already have within your reach.

The New York-born, Decatur-raised entertainer continued, “It all depends on what you can do and who you can talk to … who you got connections to. If you got a little start-up money, you know you could build your credit up. If you’re in the streets, then you might know somebody who might drop some [financial assistance] on you. It’s just all about whatever angle you are trying to go to make some money, I can’t just say,” he explained. He added, “You know it’s different strokes for different folks.”

The rapper went on, noting he wished he knew he only needed roughly $500 of seed money to accomplish his goals when he was first starting out. Unable to explain the strategy, Money Man advised audience members to listen to his music for more details.

The 36-year-old did, however, explain how he established himself as an asset outside of music, telling Baby Jade his secret was math. “I had a knack for numbers. I know numbers. A lot of people used to come to me to kind of solve certain problems, you know. Knowing how to extract and get money out of those certain things. I know it sounds kind of crazy, but they used to come to me like, ‘Oh, we need to figure this out, we need to figure that out.’”

Aspiring artists were all in store for some helpful tips from the “Blockchain” emcee, who didn’t shy away from telling those listening during the live show, “Independent is the best way to go only because you’re going to eat royalties.” He added, “You get into some of these major label systems, and you never could see your royalties.”

Elsewhere, Money Man opened up about being vegan, trying shrooms and accepting payments in cryptocurrency. According to Baby Jade, the “LLC” rapper is reportedly the first hip hop artist to take his advance entirely in bitcoin. When asked about the motivation behind the decision, the star said, “I just fuck with bitcoin, and then I needed more bitcoins anyway.” Money Man reportedly received a $1 million advance entirely in bitcoin, though he admitted he has since lost some but said it was all a part of the cryptosystem.

The rapper encouraged audience members to look into all types of online currency but cautioned everyone to only deal with those already established in the crypto universe. “It’s always something new,” he shared. “It’s ever-evolving, so it’s hard to keep up with.”

Diddy details what to expect at the 2022 Billboard Music Awards