On the latest “Drink Champs” episode, hip hop legend MC Shan discusses his career, his most infamous rap beefs over the years, the Queensbridge legacy and more. 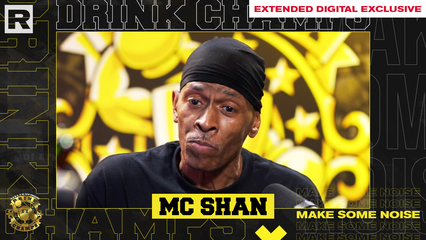 On the latest episode of “Drink Champs,” N.O.R.E. and DJ EFN linked up with legendary Queensbridge rapper MC Shan to talk about his career, hit song “Informer” with reggae musician Snow, the origins of hip hop and more.

Born Shawn Moltke, the Juice Crew member is often credited for playing a pivotal role in the commercial success of hip hop. His 1986 classic “The Bridge” is one of the most sampled records from the 80s, as it was interpolated in songs by Nas, Capone-N-Noreaga, Dr. Dre, Ice-T, LL Cool J and a plethora of others. MC Shan was notably signed to Cold Chillin’ Records — via music producer pioneer and disc jockey Marley Marl — in a joint venture with Warner Music Group. Thus, his 1987 debut offering Down By Law served as the blueprint for how to create an album, hailing triumphant singles such as “Kill That Noise,” “Left Me Lonely” featuring TJ Swan, and “Living in the World of Hip Hop.”

The following year, MC Shan released his sophomore album Born to Be Wild — which holstered promising singles like “I Pioneered This” and “Juice Crew Law” — as well as his third album Play it Again, Shan in 1990. While the musician released several mixtapes and records over the years, none of them rose to acclaim like his appearance on Snow’s 1993 song “Informer.” The song earned both artists their first RIAA-certified platinum record and remained on the Billboard 100 charts at No. 1 for seven consecutive weeks, becoming the most-streamed reggae song of all time to date. Since then, MC Shan has put out a plethora of underground projects.

To help give fans a recap, REVOLT compiled a list of nine facts we learned from MC Shan’s “Drink Champs” interview. Check them out below.

Among the many feuds that took place in the legendary hip hop collective Juice Crew, Masta Ace and MC Shan have not been on the same page in recent years, following a 2019 interview that the former did with Breaking Wreckords Radio. According to Shan, Ace spread misinformation about him, which later led to Shan going on Instagram to clear things up. “There were a lot of artists that came through Cold Chillin’ [Records] that wasn’t actually Juice Crew. If Mr. Magic didn’t say you was in the Juice Crew, you wasn’t in the Juice Crew,” Shan tells N.O.R.E. and DJ EFN. “Don’t tell people how Shan was getting stifled from Cold Chillin’. Don’t talk about my pockets, my man. I don’t talk about yours.”

During their conversation, MC Shan recalls a brief period when he dissed LL Cool J because his 1985 hit song “Rock the Bells” contained many of the same production patterns as Marley Marl’s production on Shan’s “Marley Marl Scratch.” “L came and said, ‘Yo, I got a record I want you to hear.’ So me, my Kangol was swole like a motherfucker. I heard the joint, but I never pieced together at the time that he was playing me ‘Rock The Bells.’ After he played it, I’m like fuck that, my hat too big … Back then, we didn’t steal anybody’s rhymes, we didn’t say anything, you know how it was,” he said. Shan later admits, “But it wasn’t him. He didn’t know it, he just knew it was hot at the time. Rick Rubin did it, but in my MC mind, you may have rock the bells, but you stole my beat.”

MC Shan admits that because of his ego, he didn’t understand that it wasn’t LL Cool J who allegedly copied his production. Thus, when he dropped his diss song “Beat Biter,” the rapper didn’t respond. “LL never responded,” he says.

3. On his relationship with Havoc and Prodigy from Mobb Deep

Pivoting from Havoc giving the musician his flowers, MC Shan recalls working with the Mobb Deep rapper at the height of his career. Shan says, “Havoc was at the top and the height of his game. He forgot to say about the time Shan came to [his] house at like 8 o’clock in the morning banging on the door like, ‘Havoc, yo, I need you to do this hook, my nigga!’ He came downstairs, opened his door, took me in his basement. He did it, no fucking problem.” The track, aptly titled “Fake Thugs,” later appeared on Shan’s 2017 album Bars Over Bullshit.

Later in the interview, N.O.R.E. and MC Shan discuss people painting over late rapper Prodigy’s mural in Queensbridge. “They put your mural up in the hood where you did dirt to niggas, and you’re not really from here. Yeah, Prodigy hung out in Queensbridge, but he’s not from Queensbridge. Love him for representing, but at the end of the day he was Havoc’s man,” Shan explains.

Intended to be the third track on Eric B. and Rakim’s classic hip hop album Paid in Full, MC Shan recalls recording and engineering the two rappers’ studio session for “My Melody.” Although the song was originally released in 1986, it was later remixed for the LP so that consumers would purchase both versions, according to Rakim in Check the Technique: Liner Notes for Hip-Hop Junkies by Brian Coleman. “The first joint, I played the keyboards on it,” Shan says. “You wanna know how [to know] if it’s my mix? If you hear echos all fucked up.”

5. On Queensbridge’s legacy in hip hop

Queensbridge Houses in Queens, New York, one of the largest housing projects in North America, has birthed countless rap emcees over the last several decades, including Nas, Mobb Deep, Big Noyd, MC Shan and more. Speaking on the legacy of Queensbridge, the rapper shares, “I didn’t give a fuck. You want to know why? Back when we was doing this shit, none of us thought that we would be here now. We was having fun,” Shan expands. “When they said you can have fun and get a check at this shit, oh, we was definitely with it.”

6. On being considered for the lead role in “The Fresh Prince of Bel-Air”

“The Fresh Prince Of Bel-Air,” one of the most iconic television shows of all time, paved a way for hip hop to enter television programming as rapper Will Smith led the cast. According to MC Shan, the lead role for the TV series was originally intended for him, however, until he insulted record executive Benny Medina. “They put me in the Steve Martin movie [1991’s L.A. Story]. That was their way of saying, ‘Nigga, you see what we can do for you.’ Then, they wanted to talk to me, and they pulled out the can of grease. I said, ‘Fuck you niggas, I don’t go that way.’ That’s why my career went the way it was,” he tells N.O.R.E. and DJ EFN. “Benny wanted me to be on ‘The Fresh Prince Of Bel-Air.’”

Canadian reggae singer Snow, who penned songs like “Sexy Girl” and “Lady with the Red Dress,” faced backlash for not being a Jamaican artist in the dancehall genre. His introduction to reggae music came courtesy of a Jamaican family next door at the age of 13. He loved reggae so much that he decided to pursue it rather than other genres that had seen more success at the time (like country and rock and roll). However, Snow says that if Jamaican culture didn’t approve of his endeavors, he would’ve quickly stepped away from the mic.

“My housing projects was all Jamaicans, so I just fell in love with this culture. It’s not like I did it for the money. If so, we wouldn’t have done hip hop, I would’ve done country. I was born in it,” Snow states. “If [Jamaicans] didn’t, I would’ve pulled back. I didn’t try to act it, I didn’t try to talk it. I don’t do that. I love the music, and I do it because I love the culture. That’s what it was.”

8. On their 1993 hit song “Informer” being remixed by Daddy Yankee

Snow’s 1993 hit song “Informer” featuring MC Shan played a pivotal role for the two musicians, becoming one of the highest-selling reggae songs of all time. The record was written while Snow faced charges for two attempted murders and was released after he spent eight months in Toronto’s East Detention Centre. Certified platinum the year of its release, “Informer” has been sampled and parodied by names such as Jim Carrey, Jimmy Fallon, and Daddy Yankee on his song “Con Calma.”

“Daddy Yankee was like, ‘Will get you on?’ and I’m like, ‘Yeah, for sure.’ I got on it and it came out, and it just started blowing up. I met him on stage in Montreal, came out and sang. After that, they all started calling,” Snow explains. He later adds that Justin Bieber was considered for the song’s remix, but Katy Perry appeared instead: “I had to clear it. I didn’t want to, but my wife likes her. I don’t like her. I like Justin Bieber — he wanted to be on it.”

9. On his beef with KRS-One

MC Shan’s beef with KRS-One, a key point in “The Bridge Wars,” is often considered the first major rivalry in hip hop. Shan, who represented hip hop collective Juice Crew (comprised of Big Daddy Kane, Marley Marl, Mr. Magic and more), dubbed Queensbridge the strongest borough of hip hop with his song “The Bridge.” KRS, on the other hand, sent shots at Shan and positioned the South Bronx as the birth of hip hop in a song named after his borough. While KRS-One made up with other Juice Crew members like Marley Marl, his feud with MC Shan has continued for over 30 years.

“That nigga was a fucking bum. I bigged him up because I’m a real ass nigga — you gotta give props where props is due. That nigga will kill me on stage, but if you listen to his records and my records in your headphones, you’ll see I’m lyrically superior to that nigga,” Shan tells N.O.R.E. and DJ EFN. “[KRS-One] uses words like cake, flake and bake.”