On an all-new episode of “Big Facts,” rising star Saucy Santana opens up about the music industry, representing for the LGBTQ+ community, Nicki Minaj’s support and much more. 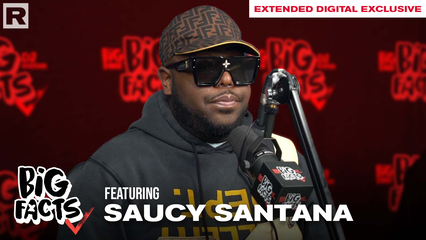 This week’s episode of the “Big Facts” podcast with Big Bank, DJ Scream and Baby Jade features none other than “Material Girl” emcee Saucy Santana. After establishing his career as a makeup artist for celebrity clients like City Girls, the 28-year-old began experimenting with music in February 2019 — not taking it seriously, initially. In July of that year, he released his debut single “Walk Em Like a Dog,” officially introducing himself as a rapper. The song was reportedly streamed over one million times in one week. During his “Big Facts” chat, Santana talked about building his brand, Nicki Minaj’s support, representing for the LGBTQ community, and more.

Thanks to the success of his track “Walk Em Like a Dog,” the Florida native earned entry to exclusive events and was offered lucrative opportunities. The track also received the dance challenge treatment, which further increased Santana’s fan base.“It was a proud moment for me ’cause all that support was genuine. I didn’t have to pay nobody to do that. I didn’t ask them to do it. It became a challenge on its own, so it was really dope, and I was proud,” the rapper said on the support he’s received thus far.

Grammy award-winning lyricist and icon Nicki Minaj also participated in the social media trend, boosting Santana’s motivation to continue creating music. “I’ve been a Nicki fan since I was in school. Even before I came out as gay, I used to make all my girl cousins and my homegirls — we had a group called ‘Ken and the Dolls.’ I used to [make them] get all of those Chinese bangs and pink hair. It was like I was living through them basically,” he shared.

“Nicki had come and did ‘TheWalkChallenge’ a whole year after everybody was doing it because she just did it at the end of last year,” Santana continued. “Me and Nicki, we always had a little communication back and forth. She was following me on Twitter, or she’ll mention me on [IG] Live or some shit like that, so I always knew that she noticed me and that she was paying attention. Just for her to do the challenge — and she was on Clubhouse, and I think somebody asked her what song would she remix, and she said my name.”

Santana added, “So, it’s definitely a sense of motivation because growing up, your favorite artist or a big artist that you … look up to, you don’t really think in your head that they’re paying attention to you. So, it gives you the sense that I might be some hot shit. It’s a validation that I gotta be on my shit.”

Though he’s garnered praised from one of the top-selling artists in hip hop, the rising star admitted that when it comes to being taken seriously in a cisgender, heteronormative, male-dominated industry, identifying as queer has its advantages and disadvantages:

“In hip hop, a disadvantage. In the industry, I can say both. Just with, you know, we know how hip hop … just being … for years, anyways, and just how industry shit is … you know. It’s still new to a lot of people. You haven’t had a queer artist — well, I can’t recall — having the success that I’ve had or just on fire, kind of just going on how I’ve been going.”

Santana doesn’t see his sexuality as a burden but a universal pass to create all types of music and art. Later, Santana opened up about the 2019 drive-by shooting incident he was involved in. The rapper and two others were shot outside The Office strip club in Miami, Florida. Santana claims that a security guard became unruly with his group.

“It’s just a situation where I’m with my friends and we turning up, shit like that, and bruh had kinda, like, grabbed me, like, ‘Aye, you know you can’t dance in here.’ I’m like, ‘Move. Don’t touch me. Don’t say shit to me. Don’t nobody ever play with me when I come in here. So, I don’t know if you new or don’t know what’s up? You need to go monitor up there. We good in here.’”

Santana said shortly after he and his crew left the establishment, the passenger side of their vehicle (where he was sitting) was shot at eight times, plus once more through the windshield.

“When I initially heard the shots, my first reaction was to jump in the back seat cause we in the middle of driving — my homeboy driving the car,” he recalled.  “So when I first started hearing them bust, I  just jumped in the back seat. So literally had I [not jumped] in the back seat — the bullet that came through the windshield, that bullet was in the headrest of the passenger [seat]. So had I … had no instinct to jump in the back seat, that was right to the head. And they only shot up my side of the car, not the back. It was like somebody watched me get in the car.”

Elsewhere, Santana talked about his bond with longtime friends JT and Yung Miami of City Girls, stating “They my sisters.” He also briefly discussed his viral Instagram Live sessions with Yung Miami, noting they’re not scripted, and it’s just something he and the rapper like to do for fun.

Though his journey to stardom has only just begun, the emcee is already thinking about his legacy. While talking to Big Bank, he said, “I just know it’s going to be so big, just off the opportunities that I have … People are already ready to pull me in every direction they want me at. They want me on commercials ’cause I got personality as well as being a rapper, and that’s what I tell people. That’s what makes me a star. You can have a rapper, but it’s just a rapper with nothing else to them — you just make a good song, and that’s all the fuck you give a fuck about.”

Santana said he is determined to make a name for himself in the rap industry. “I feel like this the door that I definitely gotta kick down because it hasn’t been done before,” he insisted. “And there’s other gay rappers and other people that want to do shit, but they look at me like, ‘Santana, you kind of at the forefront of this shit.’ They depending on me to help everybody else through, and I know as big as I already seem to a lot of people, I still got a ways to go.”