This week on “Big Facts,” hosts Big Bank, DJ Scream and Baby Jade sat down with rising singer and rapper Morray to talk about his journey within the music industry so far. 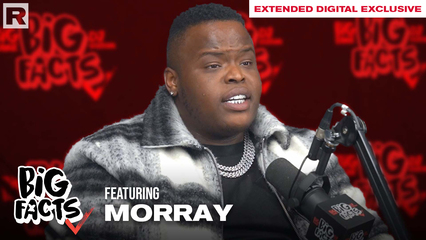 This week on the “Big Facts” podcast, hosts Big Bank, DJ Scream and Baby Jade sat down with rising singer and rapper Morray. During their chat, the North Carolina emcee detailed his rise in the music industry and talked fans comparing his artistry to Rod Wave’s.

The 29-year-old gained recognition in 2020 thanks to his breakout single “Quicksand” off his debut mixtape Street Sermons. It’s worth noting that the song almost never happened, however. The track was only written after Morray took some sage advice from his wife, who told him to create songs that were more authentically him. The nearly four-minute record landed the aspiring artist a spot on the Billboard Hot 100 in Feb. 2021, with the song peaking at No. 65.

Morray revealed that after gaining widespread success with the single, he discarded the music he’d created previously because he felt it wasn’t good enough — a move he admitted he regrets because “now I don’t know where I came from.”

“I was so nervous about them hearing my old shit when ‘Quicksand’ came out. I said, ‘I don’t want nobody to say I went down’ — not thinking that, that was my previous … that was my start. I was nervous about niggas hearing how I started,” he explained. “I don’t even have the songs that I really felt was my shit anymore because I ain’t think they was gon’ like it, but I loved it and it made me feel something.” When asked by Big Bank if he would consider remaking the tracks, the emcee said it would be possible if he “could remember them.” He went on to specify that he made 150 songs prior to scoring a hit with “Quicksand,” only to delete them all.

The North Carolina artist also noted that it wasn’t until he created the breakout single that he felt like his art represented him. “My nigga right here with me, he got pictures in his phone of me with a mini ‘fro and leather shorts on — some weird shit. A nigga trying to be a musician. A nigga trying to do shit a different way. I’m looking at it like, ‘Who the fuck is this nigga? What the fuck am I doing?’” he said.

“I was like, ‘Morray, this is who the fuck you are. You’re not a nigga to just make a song. Somebody suppose to feel something. Nigga, you got all these fucking feelings.’ I’m not a normal nigga. I have feelings. I don’t give a fuck … I cry. I get upset. I be in my feelings. Yes, I’m sensitive as fuck. I don’t care, and I want people to feel the same way,” Morray told the hosts.

“You could be a hard ass nigga but still have fucking feelings — so what. My song was boppy as fuck but so painful. The real niggas understand the struggle … but the ones who can’t relate can understand a melody, a rhythm, a bop. It’s for everybody. It’s not just for the streets. It’s for whoever who is feeling something,” he added.

The rapper said he makes music to help evoke emotions from his listeners. “I want you to feel something. This world ain’t got no fucking feelings. Niggas are afraid to feel,” he went on. “That don’t make you less of a man … less of a woman. Nigga, feel some shit, so niggas know how you feel. They can’t respect you if they don’t know how the fuck you feel.”

Later in the conversation, the “Still Here” emcee opened up about some of the difficulties he faced while trying to make a name for himself in his home state. Although North Carolina has given birth to succesful artists such as J. Cole, Fantasia and Anthony Hamilton, it still hasn’t established itself as a top contender in hip hop like New York, California, or Atlanta.

“North Carolina is still a culture trying to figure out who we are, too, but our culture is more like soul,” Morray explained. “We have a bluegrass hip hop soul kind of lane. Listen to DaBaby rap — it’s still painful. It got a bop, but it’s soulful. J. Cole, soulful. Cordae, soulful. Everyone that’s from North Carolina, that’s what we give you. That’s all we have. We live and die off our souls. We put everything into a person … into a situation. That’s what North Carolina is. We give you everything.”

Elsewhere, the emcee shared some of his dream collaborations, listing the likes of Drake and J. Cole, the latter of which sent Morray congratulatory remarks after he secured a deal with Interscope Records in partnership with Pick Six.

Morray added, “I would love to do a song with T-Pain. I feel like him being before me and being in the same lane, I gotta give him homage for what he did for niggas of my nature. A chubby nigga who can sing … who can still give boppy hooks and go crazy. He’s who I look [to as far as] the hooks and shit. That’s my guy. So, I would hope one day I could do a song with T-Pain and go the fuck up — even if it was just for my personal collection. To do a song with someone I listen to like that would be dope.”

Another melodic artist the emcee wouldn’t mind doing a record with is Florida rapper Rod Wave, whom Morray is often compared to. Morray tells “Big Facts” he isn’t bothered by the comparison. “I appreciate them,” he said. “The nigga was on before me, and the nigga is up. Why the fuck would I be mad about a comparison to a nigga that is nice? Fuck that shit. We need to do a song, nigga.”

He added, “It’s so weird because it’s like a transformation. Derez [De’Shon] started it for us, Rod Wave is keeping it afloat and Morray is trying to come into the game.”