Music lovers were delighted with a stacked lineup of cross-generational headliners at this year’s Roots Picnic.

Soul music lovers from around the country converged at Philadelphia’s The Mann at Fairmount Park for the 14th annual Roots Picnic, the first in-person reunion since the pandemic forced events to go virtual in 2020. Music lovers and Black culture supporters were delighted with a stacked lineup of cross-generational headliners, star-studded surprise appearances and music-adjacent activations to ensure there was something for every one of the 30,000 reported attendees over the two-day event.

REVOLT was on the scene to witness all of the beautiful Blackness on full display as festivalgoers participated in the World Series of Spades, art exhibits, a gaming center, film screening, and live podcast recordings. Moreover, Cause Village encouraged activism within the community for various foundations.

On the TD Pavillion stage fans enjoyed acts like Masego, Tye Tribbett, G Herbo, Alex Isley and Philly’s own Kur on Day 1. DJ D-Nice and Kenny Burns brought Club Quarantine to the festival stage with a special set that felt like a family reunion mixed with an HBCU homecoming. Fans swag surfed and hit the electric slide in unison under the pavilion big top. 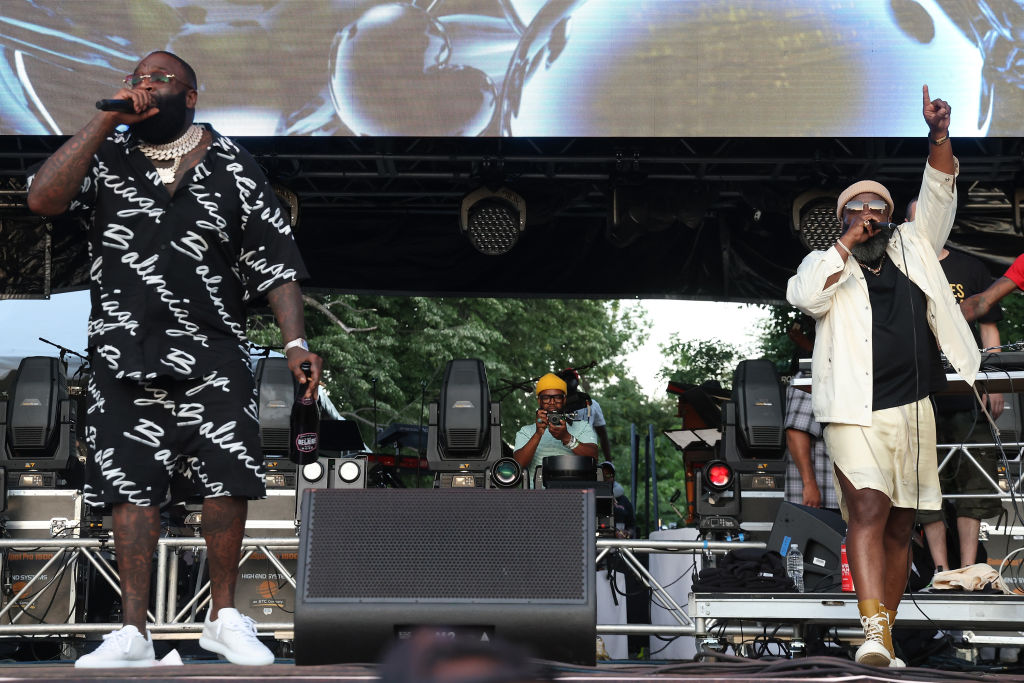 Kur told REVOLT that performing at this event was a dream come true and represents a stepping stone for what’s to come in his career. The 28-year-old rapper is gearing up to release his first album since signing with Meek Mill’s Dream Chasers Records. “One of my first cosigns came from Meek in 2013, so the shit be mindblowing,” he reflected. Survivor’s Guilt is set to to include 16 tracks and features from Meek Mill himself and longtime collaborator Lil Uzi Vert. “Just based off our history, that’s super fire,” he said.

Singer-songwriter Alex Isley also considered the impact of her billing at Roots Picnic, since this was one of her first festival stages ever. The daughter of Ernie Isley of the Isley Brothers is proud to continue the marathon of their more than 60-year legacy. The number one lesson she’s learned from her famous uncles and father is “trusting the timing of everything. They have such longevity in this business. They’re still recording, they’re still performing, so ultimately I want to do the same thing — just do this as long as humanly possible,” she said about her Donny Hathaway, Stevie Wonder, Ella Fitzgerald and Sarah Vaughan-influenced sound. Meanwhile on the Toyota Soundstage, front and center at the entrance of the event, attendees were captivated by Ambré and Aquildawud. Special guest Bilal, accompanied by Robert Glasper and DJ J.PERIOD, backed Black Thought who brought out Rick Ross and Benny the Butcher for his Live Mixtape session. Jazmine Sullivan showed off her thespian skills by bringing her GRAMMY Award-winning album Heaux Tales to life onstage through engaging storytelling and a sonically enthralling performance in her hometown. While some fans grew impatient waiting on headliner Mary J. Blige to close out the evening, The Roots made sure all of Philadelphia was yelling “Go Mary!” while she performed hits from her decades-long career, including “What’s the 411?” during which Black Thought cranked out an original freestyle. After his set, Robert Glasper spoke about his desire to collaborate with Mary J. Blige, hoping that they’ll get a chance to work on some music soon. He is also keeping an eye on Ari Lennox, who is one of his favorites of “the youngs” in R&B. The multi-Grammy Award-winning pianist and composer is proud of where the genre is today as it continues to evolve. “When something’s alive, it changes. I’m happy that it’s moving, that it’s changing, that it’s not stagnant,” he said of this generation’s contributions.

By Day 2 of Roots Picnic, noticeably less fans were in attendance, perhaps due to the devastating mass shooting on South Street the night before. DJ Diamond Kuts, who had been holding down the Toyota Soundstage both days, took the mic to call for a moment of silence and said, “Philly, we got to do better.” Armed with faith and hope, the show went on. TD Pavilion hosted sets from Suzann Christine, Tank and the Bangas, Chief Keef, Durand Bernarr and New Jersey-born Tone Stith.

Durand Bernarr’s crowd reception was noteworthy, as fans erupted with applause for his bold and agile vocals, impeccable range, and dramatic performance with makeup and extras celebrating Gay Pride. When asked how he felt about the crowd catching the Holy Ghost after his performance, he humbly replied, “People see themselves in me. They see the things that they wish they could do or say or respond and it feels like I’m literally your favorite rambunctious cousin and people love to laugh.” The singer-songwriter has sung backup for Erykah Badu for years, but he also draws influence from an unlikely source: Bugs Bunny. “Bugs is one of ‘us,’ Buggs is family. He is definitely one of the girls, and we just love him. He’s adaptable. He’s a chameleon,” he said about applying this theory to his own stage show.

Tone Stith, who also has a masterful command of the stage at just 26 years old, had the ladies squealing due to his buttery sound and sexy stage performance. The young OG was first signed at 16, but he’s grown now and tapping into his inner Marvin Gaye. “I admire Marvin Gaye,” he told REVOLT. “That’s my mom’s favorite, but for me he was one of the first artists that I felt that soul, that pain, that feeling. I was like, ‘Oh man, he’s singing from a different place.’” Back on the main stage, DJ Jazzy Jeff was an authoritative masterclass on turntabling, allowing hip hop’s first GRAMMY winner a chance to time travel with fans while blending classic rap tracks with acts from today. During his set, he even brought out hip hop pioneer Rakim — after Tierra Whack showed us why it’s still her world with whimsical performances and witty punchlines. The hometown hero brought out her toddler nephew who’s a viral sensation on TikTok thanks to his dance moves. The 3-year-old held his own in front of tens of thousands of onlookers for three songs straight. Before Wiz Kid and Summer Walker shut down the event, 90s and 2000s R&B fans delighted in the Soulquarians set, backing acts like SWV (minus Taj due to COVID-19), Musiq Soulchild who dug deep into his Jazz roots with extravagant runs, and a glamorous Keyshia Cole whose incredible voice solidified her dazzling appearance. Minus scheduling delays, technical hiccups and last-minute lineup changes, the 2022 Roots Picnic was a welcomed event for the city of Philadelphia and the culture as a whole. Mary J. Blige drops off new visual for "Come See About Me" with Fabolous

Mary J. Blige drops off new visual for "Come See About Me" with Fabolous