Chefs Tobias Dorzon and Matt Price will be in Houston on Aug. 8 for their next “EVERYBODY EATS” dinner series stop. Learn more about the tour and their unique story in this exclusive REVOLT interview.

As July is Culinary Arts Month, it’s only right that we highlight two chefs who are making major moves. Chefs Tobias Dorzon and Matt Price have a unique story. The pair come from two completely different backgrounds but less than a year after teaming up, they’re creating a name for themselves. Together, they launched the “EVERYBODY EATS” dinner series.

The event is a multi-city fine dining experience with stops in cities like D.C., Houston and Los Angeles. REVOLT caught up with the duo to discuss how they met, the inspiration for their series and more in an exclusive interview. Tune in and purchase your tickets to “EVERYBODY EATS” here.

You have your “EVERYBODY EATS” dinner series coming up, how did you come up with the concept for it?

Chef Matt: So, Tobias and I have been friends for probably most of the year this year. We connected —

Chef Tobias: We’ve been online friends for a while though.

Chef Matt: That’s what I was about to say. In today’s world, we’ve been friends via Instagram and whatnot for quite a while. I’d been following Tobias for a long time, just kind of impressed with his journey. I lived in D.C. for a while and that’s where he’s from, so when I started to take what I do more seriously, I sought out some local chefs. This was probably six, seven years ago. That’s the first time I was introduced to him. Then we got better acquainted over the years and recently in person — the way people used to make friendships. We got together, started hanging out. Cooked together and the chemistry was great and we started talking about the idea of a food tour.

Chef Tobias: Yeah, Matt was following me for a while. I didn’t even know he was following me. I had somebody who was helping me do day-to-day things and I’d mastered the culinary side as far as restaurants and private cheffing, but as far as taking the internet by storm and online presence, YouTube and things like that, I was trying to figure out how I could build my brand on that end. The one person that stood out to me was Matt. I reached out to Matt — and I’m beyond prideful — so for me to reach out to somebody …

But I reached out to him and I think what helped me build a relationship with him was that a lot of people when they’re at that point where they’re doing something and they’re doing it well, they don’t want to pass that information to someone else. It was like a no-brainer for him to reach back out and talk about how he was doing things. Right now, it’s an amazing friendship. On top of being friends, we help each other out. The business, he helps me … the culinary side, I help him and it just meshes well together. You two are the perfect pair. Matt, you came from the corporate world with Capital One and Tobias, you had culinary experience. Tobias, how did you find the time to earn five degrees?

Alright, you’re just racking them up.

Chef Tobias: It wasn’t like that. It wasn’t planned. My mom’s an education major so she walked me through college. For the culinary part, I went to an art institute and I felt like art didn’t give me everything that I wanted. As a chef, I tell people every day, when I die I want to be the best chef ever. I wanted to go overseas for a culinary education because people say the best chefs come from there. That was part of the experience, where I would’ve never imagined myself going until I actually went and saw how much it helped.

Chef Matt: When we write this story, let’s say we have a “combined five degrees” because I have zero.

Well, technically that’s true. Matt, how has the corporate world shaped you into who you are today?

Chef Matt: I think learning on the job is probably the most important. I started at Capital One as an entry-level phone associate. I was working two jobs, 80 hours a week, and one of my co-workers who’d recently been laid off from Capital One said, “You know what? You’re good with people. You should probably apply at Capital One. They’re having an open house.” And I’m like, “I don’t think they’re going to hire me.” But I went to the interview, got the job, and got promoted probably four or five times in a pretty quick amount of time. I turned it into a successful six-figure salary career, but it wasn’t — I’m passionate about sales and business, but working for somebody else just isn’t in the cards for me long-term. I took what I learned from corporate America and all the business and marketing and sales and mixed that with what I’m passionate about, which is food and cooking. And here we are. 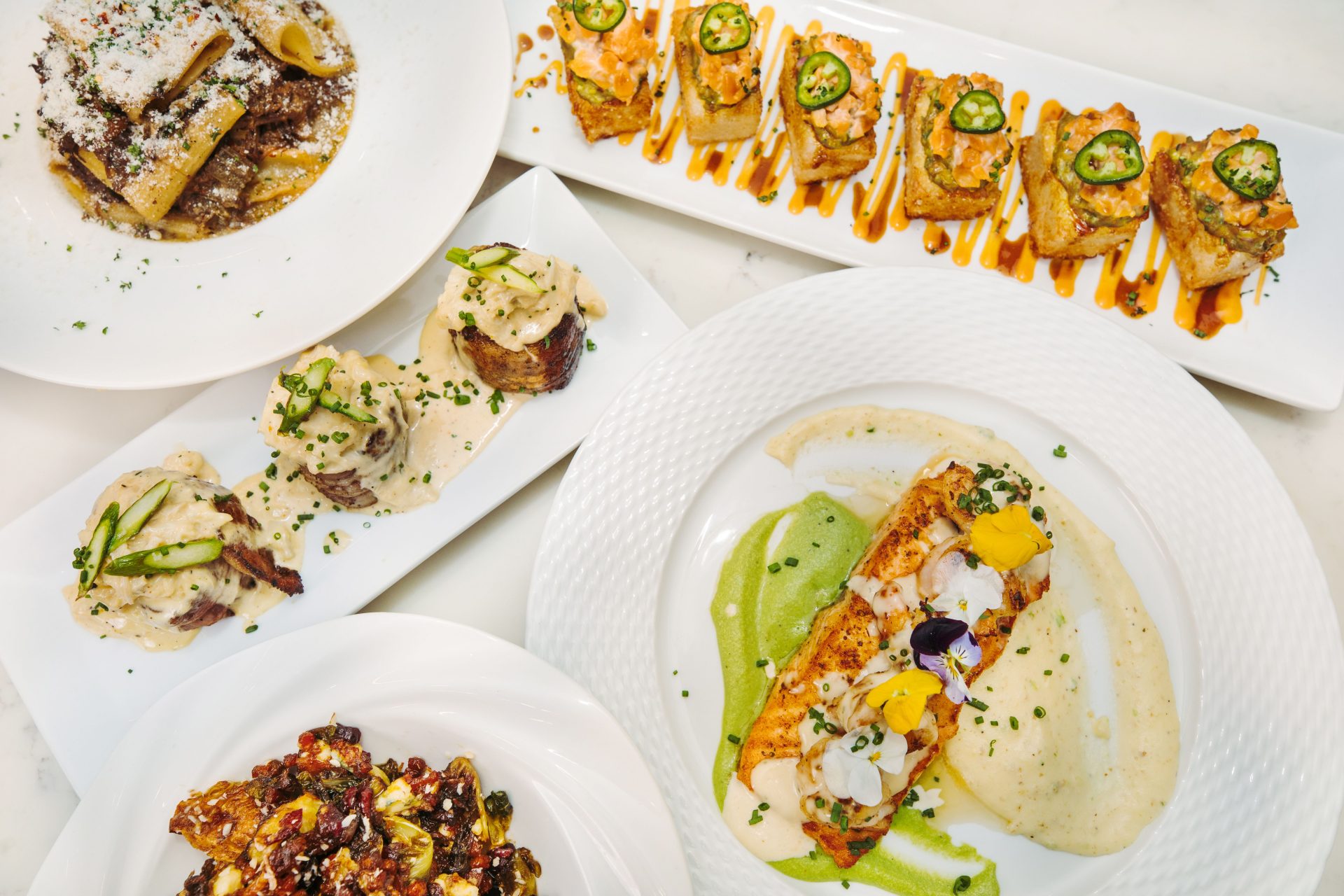 Was it scary to make that jump? You were making a very comfortable living with a stable job. Now you’re successful on social media, but that doesn’t always happen.

Chef Matt: It was very scary. To be honest, talking to some of my mentors and friends that I respect, I felt lucky to be in the position that I was in with the corporate job. I don’t have a degree, fresh off the streets, kind of got this job based on somebody telling me to go to this job interview and turned that into a 10 1/2-year career. So I was like, “It’s crazy to walk away from this.” But I made the right decision long-term. The one-year anniversary of me leaving Capital One was July 1. So it’s been one year almost to the day, and it’s definitely the best decision I’ve ever made.

That’s an incredible story. Especially during the pandemic. Did the pandemic affect your business in any way?

Chef Matt: The pandemic helped me in terms of having more time on my hands. Working from home, I could multitask a little bit more — because I was traveling a lot for work, I didn’t really have as much time to dedicate to what I’m doing now. So I made the most out of that time. And during the pandemic, everyone was home looking up cooking recipes so that was a good time to start.

Speaking of recipes, I know ya’ll throw down in the kitchen, but do either of you have a go-to, easy meal to make?

Exactly. I know I do.

Chef Matt: I’m married, my wife kind of makes the decisions on what to eat most nights and she is a lamb chop lover. So I can do lamb chop or steak real quick, depending on what the sides are. She likes pasta, too, but I didn’t want to give the same answer. Sometimes she tells her friends, “I wish we could just have spaghetti. Matt never wants to make anything simple.” If I do spaghetti, I have to make the sauce. If I just cook [something simple] there’s no fun in it.

Since the two of you [Matt and Tobias] just connected about a year or so ago, I assume this will be your first “EVERYBODY EATS” dinner series?

Chef Tobias: Our first one, yup.

Chef Matt: My wife’s friend had a baby shower so we kind of did a test run. It was for about 12 or so people, so a little bit smaller. But we ran a seven-course tasting for them and it went really well. How many people are you expecting at the first event?

What’s the most exciting part of the series? You’ll be traveling to different cities …

Chef Tobias: I’ve had this vision of mine for years. The crazy thing about it is I always used to write Diddy and REVOLT and people on Instagram and Twitter like, “I want to do the next brunch or the next Roc Nation Brunch.” I always felt like when you hear “fine dining,” you never think of a Black chef. I’ve always thought about wanting to do a dinner where it’s amazing flowers, candles on the tables, champagne being passed around and amazing food being shared. Good food and good conversation.

One day Matt and I were talking and he had the same vision — he had it actually written down and mapped out. We both have two different markets of people that we could touch and celebrities follow both of us. I think about Dîner en Blanc. I think about the Roc Nation Brunch, those types of things. But making it in a smaller, elegant setting where it’s excellence when you step into the room. I think food is an experience of everything put together in one night and when people leave, they talk about it. Anna has been great putting our photoshoots together. This is like the Super Bowl for me. It’s game day when we can put on our uniforms and go out there and produce.

Chef Matt: For me, the most exciting part is I don’t work in a restaurant. I don’t own a restaurant. I don’t even cater. So, I’m excited to get out in front of some of the people that support me and make all of this possible. It’s going to be nice to meet a lot of my supporters across the country and have the opportunity to share the food with them. Who was your first celebrity client? And who are some celebrities you’ve cooked for?

Chef Matt: My first celebrity was my boy that played for the Green Bay Packers. Now he plays for the Kansas City Chiefs. Marquez Valdes-Scantling, he’s a wide receiver. We ended up shooting a YouTube video together as well. We’re still pretty good friends ’til this day.

Chef Tobias: My first client was Santana Moss. I was following him on Instagram. He was playing for the Redskins at the time, and [I was just using] social media … constantly sending him messages. Then one day at like 3 a.m., I liked about 50 pictures that he had and it ended up getting his attention. He sent me a message asking what I do, am I taking more clients, and Santana really opened up the floodgates for me as a chef. He introduced me to DeSean Jackson, Trent Williams and a lot of the Redskins players. Then I got real tight with DeSean Jackson and he took me to California for an off-season. I was introduced to Chris Brown and Kevin Hart.

Now, between the two of you, you have so much going on that we haven’t even covered charities, cookbooks and Food Network appearances. Where can we go to find out more about you?

Chef Matt: My Instagram is _MrMakeItHappen_. It’s the same for my other social media.

Chef Tobias: Mine is my name: TobiasDorzon.