Nick Cannon appears on the season two premiere of “Assets Over Liabilities” to discuss his music career, business ventures and the next generation. 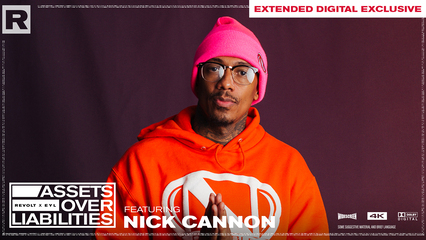 The season 2 premiere of “Assets Over Liabilities” aired on Wednesday (Apr. 20) and was hosted by “Earn Your Leisure” podcasters Rashad Bilal and Troy Millings. The two men sat down with media mogul Nick Cannon to discuss his journey from writing for Nickelodeon to becoming a jack of all trades.

Bilal and Millings opened the show by giving Nick Cannon his flowers, and the 41-year-old entertainer responded with humility.

“I’m still trying to figure it out … I never want to come from a place of, like, expertise or masterclass because it’s still a process for me. I’m still figuring it out because we are the first generation of really being able to operate the way that we operate, and we learn from the Steve Harveys and even Eddie Murphys and Russell Simmons and the Quincy Joneses of the world. But even then, it’s a different playbook,” Cannon expressed.

Bilal noted that Cannon began his career working at Nickelodeon, and he made history as the network’s youngest writer.

“The Masked Singer” host said he was discovered by Nickelodeon producers at the age of 15 while pursuing his stand-up comedy career. After performing a comedy set in Los Angeles, he was offered a position to work as the network’s “audience warm up guy.”

“When you go to a taping of a show, taping takes about 4 to 6 hours. There has to be somebody that entertains the audience during those down times and breaks. So, I became the youngest audience warm up [person] at like 15 years old,” Cannon explained. “They allowed me to start writing and be in the writer’s room. By the time I was 17, [all thanks] to my big bro Kel and all of them, they allowed me to write episodes and then I started working on other shows. I started developing my own stuff and was in the Writers Guild [of America West] at like 17 years old.”

Switching gears a bit, Bilal discussed how Nick Cannon changed the game with his comedy sketch show “Wild ‘N Out,” which premiered July 28, 2005. The Drumline actor stated he wanted to do more with his career but was being told by multiple people to just “focus on being the movie star.”

“I was hot, you know what I mean? So Drumline is out. My music is out. I’m doing my thing, and people are really trying to make me focus on those spaces. They kind of like, ‘Leave TV alone’ because at the time, you couldn’t do it all,” he revealed. “I was like, ‘No, I got this idea.’ And it was really to put my friends on because I’m still doing stand-up. I’m still making beats and signing people. I was like, ‘I got this concept of pretty much what we do backstage.’ And I got cats I rock with like Kevin Hart, Kat Williams. These are people that we freestyling on the block in front of the comedy club [with]. So I rented out a comedy club and rented cameras.”

Millings asked Cannon about his role as host and executive producer of “America’s Got Talent” and whether he chose his past hosting gigs because of the potential to acquire ownership rights to the show?

During the show Bilal talked to the mogul about his experience with investing in real estate. Nick Cannon candidly stated that he was unsuccessful with his real estate venture. “I would love to have the real estate success story, but I probably lost as much money in real estate as I made money because I was investing [at a bad time] in 2008,” he indicated.

He added, “I’ve learned especially when you become a part of these investment groups and real estate organizations — which are good because you can put in a little bit of money or a certain amount and still have ownership and see great upside — but what do you really own?”

Later in the show, Millings asked the all-around entertainer if there was anything missing from his brand?

Cannon stated that he wants to continue educating the next generation. “True educational content is king. Entertainment is fun. Everybody going to want to sit back and turn their mind off. But, when it’s something that allows you to grow, it shows [you] that I took that and I became better, I became richer, I became wiser through this process,” he answered.

Bilal also asked the proud father to give fans a sneak peek of what to expect from him in the near future. In a moment of vulnerability, Cannon conveyed, “It’s so exciting right now, but it’s so scary all at the same time because it’s almost like it’s changing by the day and it’s growing by the day,”

In a show of gratitude, he added that he is “excited” to be surrounded by talented people and wants to continue producing content.

“I have such a strong and diverse team, and everybody kind of knows their lane and kind of feeds it into that. I’ve always had an issue with delegating. I always tell people I’m a great leader, but I’m a horrible boss. I can inspire, I can get people motivated, but I’m not a good boss. I’m too nice, I don’t care enough, I don’t take stuff seriously. But you need a team that can — you need a team of bosses that know how to take their lane and department and run it up,” he replied.

In the last segment of the show, Nick Cannon discussed his music career.

“People who know the story, know that I’m a music man at heart. I probably make more money off of music than anything. But, as the aspect of where the business is, music moves the culture. For me, as a real musician, like, growing up in a church, playing whatever instrument, all of that type of stuff, it’s therapeutic for me, so it checks so many different boxes for me. As an artist, I’m a musician,” he stated.

Check out Nick Cannon’s “Assets Over Liabilities” episode up top!

Nick Cannon is the king of 'Raw&B' on new mixtape

Nick Cannon had a vasectomy consultation

Nick Cannon is the king of 'Raw&B' on new mixtape

Nick Cannon had a vasectomy consultation