T.I. details how he started in real estate because of his uncle

From music to real estate, fashion, and TV & film, our hosts, financial advisor Rashad Bilal and educator Troy Millings of the “Earn Your Leisure” podcast, take viewers inside mind and finances of T.I.’s family hustle. 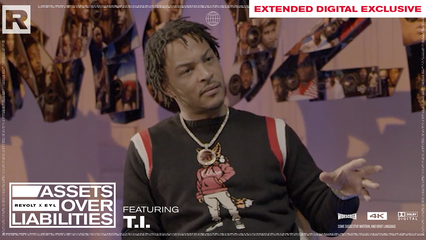 In this week’s “Assets Over Liabilities,” rapper T.I. takes viewers through the history of Trap music and southern rap, and how the culture led to his fortunes across multiple business industries. From music to real estate, fashion, and TV & film, our hosts, financial advisor Rashad Bilal and educator Troy Millings of the “Earn Your Leisure” podcast, take viewers inside mind and finances of T.I.’s family hustle.

The guys sit down in the Trap Museum, a fixture in the fabric of Atlanta now that originally began as a temporary celebration of the 15th anniversary of Trap Music. T.I. used the underground debate of who invented the genre and decided this was “a teachable moment.” The artist turned mogul began to invest in commercial real estate at the time and picked one of his properties to host the museum for a few months. “Never intended for it to be a continuous installation, but the line [has] been wrapped around the corner everyday,” he said. “Rain, sleet, snow – don’t matter. That line is around the corner.”

T.I. got his start in real estate in 2000 by flipping houses with his uncle. When he got his first signing bonus, the family member, who’d just gotten home from prison, asked him for $20,000. He took Tip to an old trap house he used to sell drugs from — now renovated and people living in it. His uncle did that with the money he loaned him. The OG challenged T.I. to take the profits and invest in more fix and flips. “We ended up doing about 80 houses before the market collapsed in ‘08. Just quick flips. A hundred thousand here or there,” he said. “When the market crashed, I noticed commercial [real estate] didn’t dip. So I said, ‘I’m going to do that.'”

This opened the door for the Rubberband Man to seize more opportunities in business. Like partnering with Run the Jewels rapper Killer Mike to acquire a landmark seafood restaurant. Once Mayor Keisha Lance Bottoms learned about this partnership, she asked Tip and Killer Mike to sit on a transition board with other local community and business leaders. T.I. said what he learned expanded his network and his idea about possibilities. One of the advantages was him learning of the affordable housing initiative the mayor was working on. That’s when he developed the connect for the Entrada West Side facility in Bankhead. The 75,000 sq. ft. community garden and recreation center is special to the area as it will provide jobs, opportunity for lower income residents to occupy their time, and take advantage of educational opportunities in a shopping complex that meant so much to his childhood. The initiative is a $37 million partnership with Bank of America, and other private and public investors.

T.I.’s whole business motivation is to preserve his roots and amplify his lifestyle. “I saw the culture of Atlanta become more valuable,” he said. “And that caused an increase in tourism and people wanting to move here. I got to find a way to get in the way,” he said about his initial thoughts. That’s when he began to take his music more seriously, and launch a clothing line and ultimately venture into TV. “Everything to me provides me with the fuel, the lessons and the relationships to get to the next thing and I just been doing one thing at a time,” he said. “Execute, succeed, repeat.”

When the guys asked T.I. about the L’s he’s taken in his business journey, he responded, “The losses is what make me a businessman. If you ain’t taking loses, you ain’t really learning lessons.”

One of those lessons for Tip came in the form of his TV show “The Family Hustle” on VH1. “’Family Hustle’ taught me about ownership,” he reflected. “The money will rock you to sleep if you focus on fees rather than equity. You will be rocked to sleep.” What he didn’t like most was his lack of control in the process and future of the show. “This was the only time in my life someone had the power to tell me, ‘We shutting you down,’” he added. “In music, I always kept myself empowered. That was very unfamiliar to me.”

Well, the “Kang” is taking his hard earned lessons to a new venture in TV. He revealed to the guys that he is executive producing a new show with DC YoungFly called “The Apartments.”

“We wrote, we directed, we produced, we financed this entire project,” he remarked. “We’re looking to license the series. We don’t want to sell it. I want to maintain control of the IP (intellectual property), and share it with the cast members.”

Watch the full episode of “Assets and Liabilities” in the video above to learn more about how T.I. breaks down intellectual property in music, TV and film.

T.I. says "nobody fucking with me" in the rap game