Every year the Super Bowl, as with many globally watched events, is unforgettable but transient. For days, brands and celebrities fly to whichever city is made the epicenter of cool by hosting the international spectacle. The average Super Bowl ticket is priced at more than $6,500, and most of the brands in attendance cater to VIPs. In reality, events like the Super Bowl profit off of cities without helping — an inconvenient truth Adidas tackled head-on well before the 2022 Super Bowl touched down in the City of Angels.

“One of the first things I talked to Adidas about was, ‘If I’m going to do this with you, we can’t show up and disappear because these kids nationwide are used to big companies coming in, showing them products, getting their insight, taking it, flipping it to make billions of dollars, and the kids barely have books or scholarships to go to college,’” Dr. D’Wayne Edwards told REVOLT.

Edwards is the founder of PENSOLE Footwear Design Academy and the visionary behind the Wood U curriculum, which was created to give underprivileged kids in Inglewood a chance to learn about design. PENSOLE partnered with Jimmy Iovine and Dr. Dre’s Iovine and Young Academy, and Adidas, to give Wood U students the opportunity to design their own sneaker — and discover all the doors creative job fields can open.

REVOLT attended Adidas’ pep rally for Audubon Middle School students, during which many of the kids participated in Wood U courses. The celebration was held at their school campus, located five miles from where Super Bowl LVI was held at SoFi Stadium. By the end, Adidas, PENSOLE, and the Iovine and Young Academy laid out their plan for leaving an impact on the Inglewood community. They also discussed other corporations needing to step up and do the same. 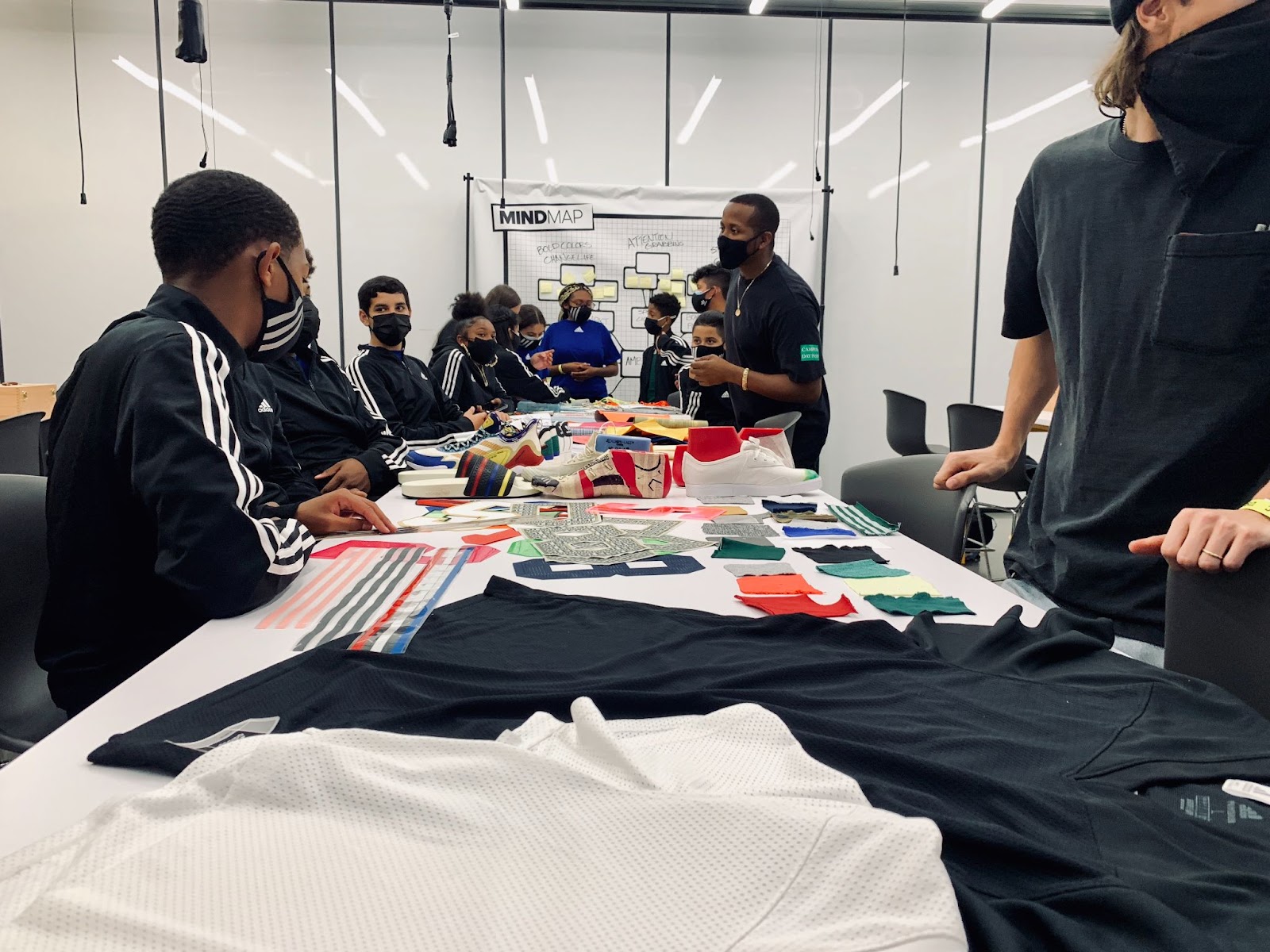 During what Adidas calls an “opportunity week,” the company held three Wood U workshops with three different groups of students, ranging from elementary to high school, in day-long sessions. The students were able to design their own shoes based on their collective ideas. Each group’s workshop began with a singular word placed on the board, and students were tasked with sharing a word they associated with the central term. “Love,” “ambition” and “power” were the three words that inspired them most and opened their eyes to what was possible. “Black folks are naturally creative. Some of us get an opportunity to express that creativity; most of us don’t,” Edwards stated. “And it goes away… untapped, unnoticed and unappreciated. I’m trying to use a common denominator of sneakers, which everyone loves and has, as an opportunity to show all the possible jobs you can get.”

13-year-old Leilanni Webster always liked painting and told REVOLT she credited the creativity she was exposed to at Wood U as a catalyst for her deeper dive into art. 12-year-old Mayleen Mexicana plans to incorporate what she learned at Wood U into her culinary pursuits, telling REVOLT, “Since I want to do cooking, maybe I can do art on the cakes when I’m designing them.” Most of the kids REVOLT spoke to from the Wood U program were either 12 or 13 years old and, interesting fact, the first president they remember is a Black man.

When they held the final product of their hard work at Wood U in their hands, some of the kids already precociously understood the magnitude of what they accomplished — and the implications it could and should have on the future. “This should happen for a lot of kids, especially Black and Brown kids. They should get opportunities like this. This could open a lot of career paths for kids my age,” 13-year-old Chelsea Hazzard said.

This is only the second Super Bowl in Adidas’ post-George Floyd era, which saw Global Human Resources head Karen Parkin resign over racially insensitive comments, a coalition of Adidas employees demanding the company boost diversity, and Adidas pledging to invest $120 million into Black communities over the next four years. Internally, the global brand expanded in order to address the unique issues affecting marginalized communities in America. Adidas Director of Social Impact Projects in North America, Jamira Burley, joined the company in September 2021. She told REVOLT that within the last six months they’ve created the North American division of its Global Purpose team with the purpose “of recognizing there is a cultural need to focus on what’s happening here in the United States and how we can work with local partners who are doing the work at the intersection of sports.”

Burley promised Wood U will be a “recurring collaboration” with PENSOLE and the Iovine and Young Academy, as the apparel brand plans to integrate the Wood U curriculum into their school. Her comments come a week after it was announced Iovine and Dre will partner with PENSOLE and Adidas to launch a new educational program in South Los Angeles. That program will be a part of the new Regional High School #1 magnet school the Los Angeles Unified School District plans to open on the Audubon Middle School campus.

Iovine spoke at the pep rally and promoted the ongoing collaboration as a way to change how students learn instead of what students learn, eschewing memorization-based learning in favor of a hybrid learning experience that prioritizes critical thinking. From the kids being inspired to pursue creative passions to Iovine and Adidas mapping out a future in which their educational strategy could be central to a new way of teaching, the pep rally wasn’t a Super Bowl activation; it was tantamount to building a better future for South L.A. If anyone knows how dire the Los Angeles youth need change more than they need a spectacle, it’s Inglewood native D Smoke. Outside of delivering a riveting performance at the pep rally, Smoke helped guide the Wood U students during their workshops, akin to his years as a teacher at Inglewood High School, the High School for Recording Artists, and other secondary learning institutions. He has first-hand experience with “school programs that help educate a different side of the student’s mind,” according to what he told REVOLT after his performance. Smoke vividly remembers his own time as a high school student at Inglewood High and how corporate investments typically went to the athletic programs, further instilling in young kids’ minds that sports were their primary pathway to success. For him, true change can only come when corporations fundamentally shift how they view the communities they sell to.

“These are not just markets; these are communities. If we just treat them like markets, we’re not dealing with the people directly. If we’re treating them like communities, then we’re building bonds and not just capitalizing off young people,” Smoke said.

Sure, the Los Angeles Rams won their first L.A.-based Super Bowl, the greatest hip-hop halftime performance ever occurred, and every star you could think of turned Los Angeles into a bigger celebrity playground than normal — but if that’s all you saw, then you witnessed business as usual. If you were privileged enough to speak to the youth at Audubon Middle School, see their faces light up in excitement when Roddy Ricch emerged from the smoke on stage, or see their eyes sparkle with pride when they accomplished what was once unthinkable to them, then you saw the real champions of this year’s Super Bowl. The ones who should be the champions at every Super Bowl going forward: the community.