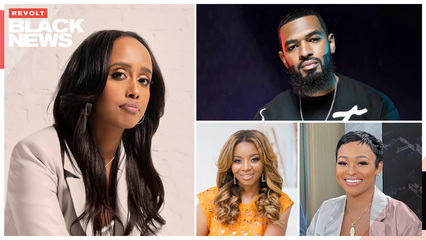 Do Black Hairstylists Have A Duty To Care For Clients' Mental Health?

Abdulahi began the show by discussing the crisis that African immigrants are facing while trying to exit Ukraine.

Nigerian student Alexander Somto said during this week’s episode that he faced discrimination during his more than 500-mile journey from Ukraine to Berlin, Germany. “I wasn’t expecting [Ukranians] to be discriminating against those that are not looking like them,” he said.

Jeff Kwasi Klein, a project manager with Each One Teach One said his program is on the ground in Ukraine and is helping students like Somto make a safe journey from the war-torn country to Berlin. “In terms of my organization, it’s been around 50 people who have come to us every day and every night because we are there 24 hours, working in shifts. Most of the Black people coming to Berlin … are going through our organization,” Klein shared during the segment.

Abdulahi then criticized reporters who thought the war was unorthodox because it was happening in a “civilized” and European country as opposed to conflicts occurring in the Middle East.

“Now, to call one group of refugees ‘civil’ leaves an assumption that typical refugees are uncivil,” Abdulahi stated. She then took a look at WNBA star Brittney Griner who has been detained in Russia and charged with drug smuggling.

Shae Kelley spoke with Abdulahi and stated that the Phoenix Mercury player “is one of the best center’s in the league. She brings so much to the game … she’s really a big icon for the WNBA.”

“I’m really terrified for her. It’s very concerning. Just being overseas, we’re usually by ourselves. We’re so far away from support, from family, so being arrested in another country has to be terrifying. My thoughts and prayers are with her,” the professional basketball player added.

Kelley went on to say that if we didn’t have social media, Griner’s whereabouts may have remained unknown to the public.

Following that discussion, Abdulahi spoke with REVOLT’s Kennedy Rue McCullough about a new law in Tennessee that requires barbers and hairstylists to recognize the signs of domestic violence when dealing with clients.

Stephan Swearingen, an entrepreneur and barber, believes the law puts a lot of pressure on him and other hairstylists. He discussed a time when a woman client who was a victim of domestic abuse asked him to cut her hair.

“I had to step out of my position as a barber at that moment and ask her, ‘Do you think by cutting your hair this is something that could further anger him?’ Going back to the Tennessee law, what responsibility do I bear then? Do I have to report this? Even family getting too much involved in it can become dangerous to that family member. We’re not even talking about a hairstylist or someone like that,” he said.

“I was 18 and I had a client who told me that coming to get her hair done was her only escape. She said, ‘My boyfriend beats on me and he only allows me to go outside to take the kids to the bus stop or for me to go get my hair done, but I have to come back in after that’ … This can be a big responsibility, but with it being so much of a sisterhood and me loving my clients the way that I do, I just try to be there,” Scott said.

While speaking with “REVOLT BLACK NEWS Weekly,” President of the National Urban League Joi Chaney said Jackson has held many prominent roles which make her qualified to become the next Supreme Court justice.

“She has served on three different levels of the judiciary, she has been a federal [public] defender, she’s worked in the United States Sentencing Commission, was a former clerk herself, double Ivy [league] if that matters to you. This is someone with incredible credentials,” Chaney insisted.

Given Jackson’s work history, RNC spokesperson Paris Dennard believes President Biden selected Jackson because it will be “easy” for her to be confirmed.

“When you look at the reason why President Biden nominated a Black woman to the Supreme Court you have to go back to the campaign trail. He had a whole series of issues concerning his record with the Black community. It was always a political ploy to get Black votes. I think President Biden selected Judge Jackson because he felt she would be the easiest one to get confirmed,” he said.

Chaney expects Jackson will faced obstacles when she goes before the Senate later this month.

“Every nominee where the person was a woman of color has really faced extra scrutiny. People making nasty comments about them, trying to say that they’re not qualified. Highlighting small things trying to make bigger things of them. Really, I think, selling the American people short, thinking they can be tricked. We are prepared for that. Black women all over this nation — within the legal system, outside of the legal profession — we are prepared,” she said.

Watch a clip from the domestic violence and barbershop/hair salon discussion up top. Plus, be sure to catch the next episode of “REVOLT BLACK NEWS Weekly” on Friday, March 18, 2022 at 6 p.m. ET on REVOLT‘s app.