Yung Miami kicked off her new REVOLT series with a bang. #CareshaPlease 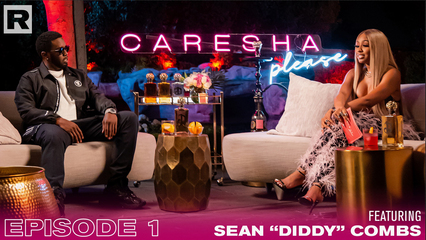 Last night, Yung Miami debuted her new REVOLT series “Caresha Please,” which saw none other than Diddy as her first-ever guest. As expected, the sit-down was electrifying, with the two opening up about their relationship, goals and aspirations, and much, much more.

Scores of fans watched and commented during the premiere, with many praising Yung Miami for what amounted to amazing content, great chemistry with the Bad Boy mogul, and a more personal look into the City Girl‘s life and personality. She was also credited for making such a power move into digital media, further expanding her reach outside of her music career.

“That was sooooooooooo good I’m so proud of you!!!!!! @YungMiami305 #Careshaplease”

Meanwhile, Twitter user @nottramar quoted one of many exchanges between Miami and Diddy that’s sure to go viral in the weeks to come:

“Caresha said “is i fun” and the billionaire said she’s “the funnest”. I know those girls are throwing up…”

To date, City Girls have made major waves in the music industry with three successful bodies of work, beginning with the 2018 mixtape Period. In that same year, the Quality Control-signed duo liberated their debut studio LP Girl Code, a 13-song affair with additional contributions from Cardi B, Lil Baby, and Jacquees. It was following the release of Girl Code that saw Yung Miami holding the proverbial fort down for the brand after JT began her highly publicized prison sentence, representing City Girls on tracks alongside the likes of King Combs, G-Eazy, Moneybagg Yo, Juicy J, Saweetie, and Lil Kim. Upon JT‘s release, the group would keep their momentum going with the top 40 success City on Lock.

Take a peek at some of the more notable tweets about “Caresha Please” below. For the few who missed it, you can press play here.

That was sooooooooooo good I’m so proud of you!!!!!! @YungMiami305 #Careshaplease

Caresha said “is i fun” and the billionaire said she’s “the funnest”. I know those girls are throwing up https://t.co/WzR2k3CyIU

Diddy : we go together now??

I fuck with diddy and caresha bond. That’s hard!!!!

Caresha & Diddy’s energy together is so fun to watch. You can tell they always laugh together. #CareshaPlease

Diddy “Thats crazy, you was hanging off hood of a car”
Caresha “I’ll hang off yours”
😀😀 #Careshaplease

Caresha on marriage is me.

“When it’s time for me to get tf on.
I wanna go.” pic.twitter.com/CjIIGrZ1rj

I enjoyed Caresha Please, @YungMiami305. This series is definitely gonna be a hit. Miami is so down to earth and seems like so much fun.