“We gotta get comfortable with saying, ‘I don’t know some shit, I gotta go learn some shit.’ We have to stop using that shit as an excuse,” the financial expert said on “Big Facts.” 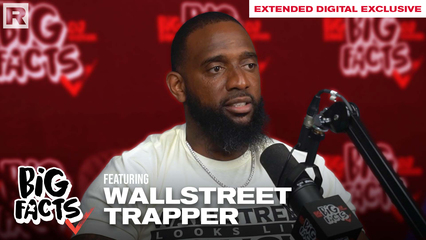 Big Bank, DJ Scream and Baby Jade served up an extra special episode of the “Big Facts” podcast this week with guest Leon Howard, better known as Wallstreet Trapper. Known for “educating the culture on how to build wealth one share at a time,” the New Orleans native stopped by to share his insight on financial literacy, the stock market, national debt and more.

Wallstreet Trapper is no stranger to street life. At the age of 9, the entrepreneur watched his mother get shot. By 17, he was already serving a 10-year sentence in prison after being hit with a murder-related charge. During his bid, he met an inmate who would ultimately change his life. As he reflected on his entire childhood being wiped away, Trapper said he was stunned to learn that his cellmate would spend less than two years behind bars despite claims that “he embezzled $2.8 million” and ultimately “paid $800,000 restitution, kept $2 million, did eighteen months.” The unidentified man informed Trapper that he was  “playing the wrong game.”

“During that time period, we were in the hole for maybe 45 days together, and so he just started talking to me about financial literacy,” Trapper explained. He told “Big Facts” the encounter taught him three things that wealthy people do with their money: “They stop trading time for money, they start making their money work for them, and they start giving value to people,“ the latter of which he said he learned later on in life.

After a few setbacks and another stint behind bars, Trapper was forced to re-evaluate his financial strategy. He told the “Big Facts” co-hosts, “I just kept learning because the shit reminds me of the streets so much.”

He continued, “Even when you look at America, America is just one gangsta. Canada is one gangsta. China is a gangsta. It’s different hoods. It’s different people trying to take this bitch over. It’s the same thing in the streets. I’m trying to go to your hood and do this. If Bank got a hood [and] I’m trying to come hustle over there — if I ain’t strong enough, I gotta pay Bank’s draft. That’s the same thing that happens in America. You want to sell some shit over here — you gotta pay me a tariff. That’s a draft. You paying to hustle over here.”

Trapper went on, “So when I started saying that this shit just like the streets, it ain’t no different. The only thing really — they get to sit back and build wealth and not go to prison and not get killed. I’m like, we have to play this game and then I started understanding, we playing the wrong game. Instead of us being the pawns on the table, let’s go be the knight, the king, the bishop.”

Elsewhere, the CEO stressed that “education is the leverage to life.” Using a fast food restaurant analogy, Trapper explained that when you know less, you are awarded less while comparing a janitor’s salary to someone who cooks the food, manages the establishment, and even those on the corporate level.

“We gotta get comfortable with saying, ‘I don’t know some shit, I gotta go learn some shit.‘ We have to stop using that shit as an excuse,” he said about individuals who may be hesitant to learn about financial literacy.

Still, the educator warned not to expect to make a million dollars with your first stock investment. He did, however, offer other strategies that would help your money work for you, including ETFs, otherwise known as “exchange-traded funds.” These are also known as “funds that trade on exchanges, generally tracking a specific index. When you invest in an ETF, you get a bundle of assets you can buy and sell during market hours —potentially lowering your risk and exposure while helping to diversify your portfolio,” financial services company Charles Schwab notes.

“If you like technology, you can buy an ETF that’ll have Apple, Microsoft, all those big businesses. So now that’s safe for you, and you’re now investing in one industry that you like,” Wallstreet Trapper added. “That shit going to make money regardless. That shit is going to make 8-10% a year. That’s better than making $0.01 sitting in the bank.”

He said elsewhere during the interview, “There’s levels to it but this shit can change your life.”

Despite the endless possibilities, some members of the Black community still seem a bit reluctant to participate. When asked by Bank what he believes is the cause, the financial expert said, “For one, they kept us in survival mode.” He also noted, “We’ve been taught that the only way to make money is to work for it. So, ‘Anything that can make me lose this hard-earned money — I want no parts of it.’ You feel like it ain’t for you. So, if you feel like something ain’t for you and ain’t nobody speaking it to you and representing — you ain’t got nobody that looks like you doing this shit. All you see is old white men doing that shit. For forever, that’s all you saw, so there’s already a disconnect.”

The COVID-19 pandemic is the behemoth no one saw coming. As everyday life was forever altered, the pandemic brought on more than just mask mandates and safety guidelines. According to the U.S. Bureau of Labor Statistics, “Over the 12 months from January 2021 to January 2022, the Consumer Price Index for All Urban Consumers (CPI-U) rose 7.5 percent.” This is all while the value of the U.S. dollar is threatened by several factors, including the recent and severe price hikes.

And for those curious to know how much debt the United States is currently in, Wallstreet Trapper said to check out usdebtclock.org — at any time of night — to watch the already $30 trillion bill continuously increase. Meanwhile, the average debt for a citizen at the time of his interview was over $91,000 regardless of income and, per taxpayer, over $242,000.

“That shit don’t ever stop,” the money aficionado shared. “If you won’t find a way to make money without working for it, you gon’ die trying to make money and that shit loses value every day. They not ever getting out of $30 trillion worth of debt. That shit gon’ keep adding up.”

There are several ways Trapper shares his knowledge of finances with the public, including through his organization Trapper University, which promises to give students “the ultimate step by step course to investing in the stock market.” The investor said he’s also prioritized steering the conversation in a more lucrative route.

“I started making us talk about making money outside of just hustling, so I went to show them. I’m messing with options, showing them I’m getting money from the stock market,” he said. To further encourage his friends, the go-getter admitted he would playfully tease them about how their spending earned him money. He stressed that the easiest way to invest in stocks is to choose brands you already like. “Most of our generation got Apple. Everyone should own that shit,” he declared at one point.

When his friends would purchase Hennessy or Louis Vuitton items, Trapper would clown them about how they helped boost his LVMH stock values.  “You just bought a new iPhone? Just made me some more money, bet,” he quipped. Still, he intended to make learning the information interesting, telling listeners, “We make everything dope and for me, that’s what ‘From the Trap to Wall Street’ was about. It was about, ‘How do I make this shit fun for us?’”

Like always, if you liked what you heard, be sure to stay tuned every week for new episodes of “Big Facts.” Also, don’t forget to watch the latest show starring Wallstreet Trapper above.