Jayda Cheaves appeared on an all-new episode of “Assets Over Liabilities” and spilled some of the secrets to building a formidable empire. 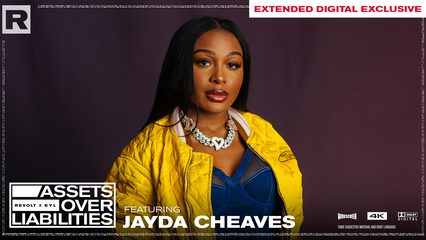 Dive into the world of social media marketing in this week’s “Assets Over Liabilities” with influencer and serial entrepreneur Jayda Cheaves. This budding mogul is a success story of turning influence into capital before she even graduated from high school. Tap in as our hosts, financial advisor Rashad Bilal and educator Troy Millings of the “Earn Your Leisure” podcast, take viewers inside the mind and finances of Cheaves’ digital hustle.

With confidence through the roof, Cheaves began the interview by tooting her own horn. “You needed me,” she told the hosts as she established her unique position in business and the roster of impressive past guests.

The 25-year-old influencer outlines how she grew a massive social media following of 300K followers as a 15-year-old student personalizing her high school uniform. She got her first introduction to business by reselling her weekend clothes on Poshmark. “Switching my hair, being myself and being creative,” Cheaves notes.

When she got fired from her waitressing job, she felt the pressure to prove to her grandmother that she didn’t need to work for anyone to make a living. As she launched her original t-shirt company, she blew her own mind when grown women were chasing her down for their own “A’mour Hustle” tee. Cheaves explained that she didn’t have the capital to invest in the brand but negotiated with a local printer to pay on the back end. “I made so many promises,” she laughed. But the relentless hustler stayed focused and continued to increase the number of sales hand over fist in a matter of months. She had to employ her mother, sister and grandmother to get the orders out — as a 16-year-old. Due to sustained success of her business, Cheaves made the decision to graduate a year early.  “I told you. I told you so. I’m not working no more,” she said she told her grandmother before making the pivot to selling virgin hair extensions.

Cheaves sent her father to China to find vendors for the best quality hair. Between her marketing and a quality product, the young go-getter found herself selling 1,000 orders every Friday at $50 per bundle. For quality assurance, she put the hair through a rigorous three-month process of straightening, coloring and other stress tests. Unfortunately, as time went on, she noticed her vendors stopped sending quality hair and began to rake up negative reviews. Due to the time it took to pay for new samples and having to process refunds while losing money, she made the decision to walk away from that business to move on to the next. “You’ll f*ck your face card up if you just keep trying to make money,” she said about taking a social media hiatus for five months to regroup.

The perseverant entrepreneur’s next angle came from leveraging her influence to educate her followers by sharing the wisdom she’d acquired over the years with her “Marketing Mondays” educational series. “I was always thinking of ways of how I’m going to make this money. I don’t have a link in my bio, so what’s next? Now ya’ll gotta pay me for the knowledge I didn’t have and all the mistakes I made publicly.” At $50 a piece, Cheaves sold virtual seats to her hour-long live webinar using a platform that granted access to 500 people per session. “Oh. I sold out every time,” she said. After three months, she published a book, “The Young Boss Blueprint.”

Today, the mogul-in-the-making is proud of her Waydamin brand, which offers loungewear and basics. Nervous about selling products again for the first time in three years, Jayda was surprised to watch her first drop sell out in a matter of minutes. “When it sold out, it was like, ‘I’m back. It’s time to turn this shit up and I’m going to do it the right way. Billionaire status,” she said. This time around, Cheaves has a warehouse, employees, a manufacturer and years of experience in her toolbox.

As a new mom, Cheaves learned how to multitask like never before. “If you come into my office, you’ll see my son’s bed because he comes to work with me,” she revealed. The visionary also turned her 3-year-old’s passion for reading into yet another business venture — a children’s book where he’s the main character. “This was my gift to him. I see money in you, too,” she said about her baby boy. “He got an LLC. His name is copyrighted and all that good stuff.” The enthused mom sees the book becoming a series.

Authenticity is at the core of the Jayda Cheaves brand, so it’s no surprise that she proudly continues to run the bag up with brand partnerships and fresh new ideas on the regular. “I’m trying to milk the cow until I can’t no more,” she quipped.

Watch the full episode of “Assets Over Liabilities” above to learn more about how Jayda Cheaves continues to push the envelope on Black entrepreneurship.