“As busy as he was, he implemented meditation every day before he got his day started,” NLE said of his late role model Kobe Bryant. “He ain’t chase the day… the day came to him. Everything just flowed.” 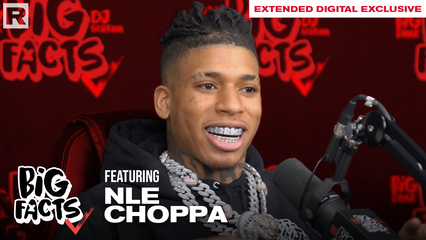 On this week’s episode of the “Big Facts” podcast, Big Bank, DJ Scream, and Baby Jade sit down with special guest NLE Choppa. The Memphis, TN native has been making headlines over the last several weeks, for various reasons, many of which he spoke on during the illuminating chat.

The 19-year-old rapper has been a topic of discussion for many reasons. Earlier this month, the “Jumpin” lyricist found himself in a violent altercation at an airport after a purported fan approached him in an attempt to get a photo. NLE claimed he was unaware of what the fan wanted because he had headphones in his ears and was listening to music before the incident transpired, however. “After the phone hung up, the music cut back on, and the only thing I see is a nigga walking up to me with a camera… and he’s like, ‘You NLE?’ And I guess this was his third time asking — like, I got my earphones in, I’m chilling. He’s like, ‘You NLE? You NLE, right? Why you acting so scary?’” he explained.

“I’m like ‘scared?’ I must’ve squared up to him. It wasn’t like I was going to fight or nothing; I just told him to chill… I got flip-flops on,” he added. However, things quickly turned physical and punches were thrown. Looking back on it now, NLE believes the individual was clout chasing. He also noted that “certain fans, they got a tendency of getting in their feelings if we don’t acknowledge them, but at the end of the day, niggas is human.” He added, “You don’t know what I was just going through. I was just arguing with someone previously before I even got to that point. A lot of stuff builds up — certain stuff that you don’t see, behind the scenes — and then you come up to somebody and say certain words and trigger that person.”

However, the “Walk Em Down” rapper admitted, “I get mad that I react the way that I do. If someone can say something so little and it triggers me, then I become a slave to their words. It’s a weakness.” That admission paved the way for a discussion about his health and spiritual journey. Like many rappers who’ve recently made their mental health a priority (Big Sean and Kevin Gates to name a couple), NLE said he’s done the same, and opened up about how meditation and a healthy lifestyle have improved his overall self.

“I was at a point in my life where I was extremely depressed and my anxiety was at its highest — internally, I was in my lows,” he shared. NLE said one day during prayer he asked, “God, I have everything I want, why am I feeling like this?” The young rapper said that he realized that while he had all the materialistic possessions he wanted, he didn’t have what he needed.

“I had my wants. I just didn’t have my needs,” he continued. “It was an oath I made with God before I blew up. I said put me in this space of negativity to where I could change it to make a positive and make an impact in a good way… like, I can rap about it but let me turn a negative into a positive situation.” The young star said that along with finding success, he was also introduced to the entertainment industry’s dark side, which usually included drugs and other vices. He later revisited the oath he made with God. Shortly after, he was introduced to meditating.

“You know me, a nigga come from the hood, we tote guns, we smoke weed. We do everything street-related, but a nigga ain’t never told me nothing about no meditation. So for me to really look at that and take heed of it was a blessing ’cause had it been any other nigga, I would’ve been like, ‘Man, fuck all that,’” he explained.

When asked what motivates him to stay in a positive mindset and lifestyle, NLE shared that his role model was the late NBA legend Kobe Bryant. “That man, as busy as he was, he implemented meditation every day before he got his day started because it made him feel like…” NLE began, finishing his thought with: “He ain’t chase the day… the day came to him. Everything just flowed. It just went with it.”

Elsewhere, the star opened up about creating health supplements. As many NLE fans may know, the rapper recently made claims about creating a natural pill that would give women their desired body — without going under the knife for a BBL (or any other trending surgery for that matter).

“I just realized that people glorify an African body, but some people, melanated people, don’t have that African body because of what we eat and what we consume here in the U.S., but if you go back to your roots, everything that a female be wanting within the body comes from what you put into your body — what you eating,” he said. NLE claimed that with his supplement, coupled with healthy eating and regular exercise, users may start seeing results as early as two-to-three weeks tops.

NLE said his music has also been affected by his personal growth. “You just don’t know, man. The shit I’m sitting on, it’s so diverse. Y’all hearing this shit first… the music I have in my vault, it’s unlike any other song you’ll ever hear. Off the simple fact, I’m sober. I’m not coming in the studio unprepared. I really sit down and write all my music like I’m in a motherfucking [jail] cell… from the hook to the last verse, I’m writing it out. I’m visualizing it as I’m writing and telling the story,” he explained. “A lot of my old music is mainly hype shit, but my music has matured so much that I rap on any type of beat and leave the studio with a hit, every time,” he added. Along with creating new music, he hopes to collab with Drake one day.

“I feel like he the only rapper that can stay hot two decades straight… nobody really doing that. I just find that shit crazy that somebody can stay that relevant, and I just feel like that just comes with you being a good person… you being pure. People with a good heart, you get that type of blessing,” he said. “Musically, I just love his music; it’s stupid advanced.

Like always, if you liked what you heard, be sure to stay tuned every week for new episodes of “Big Facts.” Also, don’t forget to watch the latest show above!