“Five, six years ago, the market start booming for BBLs and its been a good trend since then,” Dr. Voskin explained. “People coming more and more asking for that procedure.” 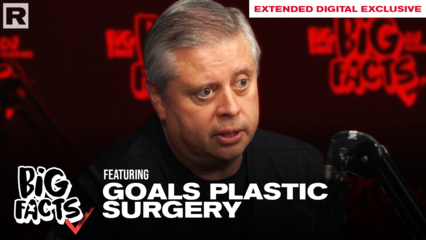 Big Bank and DJ Scream return with another episode of the “Big Facts” podcast that you’ll have to see it to believe it. The group sat down with Dr. Sergey Voskin and Nicole from Goals Plastic Surgery — top cosmetic surgery experts — to discuss the latest trends, risks, misconceptions and more surrounding body alterations.

The Brazilian Butt Lift has quickly become the latest growing trend in cosmetic surgery over the recent years — despite mounting concerns and even deaths. To help ease the worries and apprehensions around getting extensive work done, Dr. Voskin attempted to separate the myths from facts regarding the surgical craze.

“It’s obviously a surgical world, but we don’t look at it as that. We see it as the beauty world, the body transformation world. Our motto is different. We try to bring an accent more on body image and self-esteem, and that’s what we bring to the table,” Voskin explained. “For per surgical world, yes, it is a surgical world as there is surgical procedures seriously done so we look at it from also serious perspective obviously… but for our customers, we would like to present it as a self-esteem procedure, as a body image. We try to create Goals basically like a lounge, a cosmetic ascetic lounge.”

Voskin, who has been in the field for over a decade, said his objective is to enhance the beauty of said individuals looking to get work done. It is never to entirely change them — at least, that’s how they brand themselves.

“Well, basically, everybody [is] born with already a preset baseline,” he said. “When you’re born, you have certain body type, a certain body personality, I would say, which is made out of bones and tissue and not just fat. So, what we try to do is find the best approach to that particular body and to refine that image that the body has already.” Voskin noted that nearly “five, six years ago, the market start booming for BBLs and it’s been a good trend since then.” He added, “People [are] coming more and more asking for that procedure.”

BBLs have gotten so widespread that it has almost become sort of a sport on social media to point out celebrities who’ve gotten work done — and its usually figured out by the thigh to butt ratio. Voskin broke down another popular type of surgery — a double BBL — that is done that may explain why your favorite internet influencer’s legs appear to be a bit disproportionate from the rest of their body.

“It’s still one booty but the point is we’re adding way more area and position fat in such a way that we include the outer thigh area,” he explained. “In our world it’s all about the magic s-curve. The s-curve from the sides and the s-curve going from you back area. So, in different ways you position the body, you want to see that pronounced s-curve. That’s the whole point of it. The double BBL really enhances the result of a regular BBL by adding fat on a certain different area to support the body to lift it, well, like we say, lateral, which is basically outer thigh and going to mid-thigh areas to enhance s-curve all around.” Simply put, Nicole says instead of transferring fat just to the butt, doctors include hips as well.

Though the doctor debunked several misunderstandings about the getting plastic surgery, Voskin put a stern emphasis on pre-surgical care including being cleared to go under the knife.

“I mean we are very strict with those terms because patients come to the office wanting the BBL done, wanting the body transformation and we want to make sure the procedure is safe for them,” he said. “It’s a strict protocol in our office. Every patient that’s getting any procedure at our office and Goals require medical clearance from their doctor and the laboratory work.” Still, Voskin said it’s only after their review will patients get to work with Goals, revealing that many times they don’t not clear BBL hopefuls even after they’ve been cleared by their primary doctors. Voskin also denounced getting “cheaper” surgical procedures out of the country.