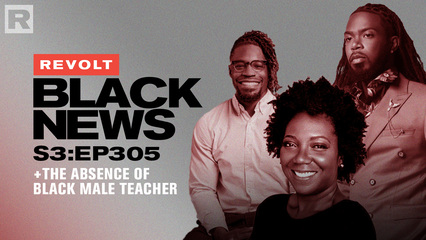 “REVOLT BLACK NEWS Weekly” aired on Friday (Mar. 25) to discuss skepticism surrounding WNBA player Brittney Griner’s detainment in Russia, the assassination of President Jovenel Moïse in Haiti and why the U.S. has a shortage of Black male teachers.

Abdulahi opened the show by updating viewers on Brittney Griner’s detainment in Russia. The 31-year-old Phoenix Mercury center has been held in the country for more than a month but is reportedly in good condition. Abdulahi said that given the amount of time Griner has spent in Russia it makes her wonder, “Is the U.S. government doing enough to secure her release?”

While speaking at a press conference, Congresswoman Sheila Jackson Lee (D-TX) said, “Brittney Griner is a United States citizen. She was a guest in Russia, and I will be demanding her release.” Then, during a White House press briefing, White House Correspondent April D. Ryan asked White House Press Secretary Jen Psaki, “Is [Griner] Putin’s bargaining chip?” Psaki responded, “I can’t speak to the specifics of this case April. I certainly understand why you’re asking, but our focus right now [is] how we’re going to bring an end to the conflict — to support and boost up the Ukrainians.”

During “REVOLT BLACK NEWS Weekly” Nola Haynes (West Coast director of Women of Color Advancing Peace, Security & Conflict) said she is concerned about Griner’s well-being in Russia. “I am worried [about] Brittney Griner … her multiple identities as a woman, a Black woman, a queer woman. She stands out. Putin is homophobic. That’s no secret, he’s made numerous public statements about it. He even got into a battle with Elton John because of their very homophobic laws in 2013,” Haynes added.

Legal analyst Adrienne Lawrence told Abdulahi that given the current climate, it is only fair to call Griner a “political prisoner.”

“I don’t know if Brittney Griner will be able to come home any time soon because at this point in time she’s caught in the middle of a geopolitical conflict where we have Russia waging war on Ukraine and taunting the rest of the world. We are in a very tumultuous period in time, and it happens such that Brittney Griner is in Russia being detained,” she said.

“We don’t know if Brittney is innocent or guilty of the charges being levied against her. Obviously it’s tough but at the end of the day, if she didn’t do this, all of the WNBA former and current players are behind her. But the fact remains if she did do this … then she’s going to be over there for a while,” she said.

Lawrence told Abdulahi that unless proven otherwise, the public should not assume Griner is guilty of possessing drugs.

“We know drugs could have been planted on Brittney Griner by virtue of the fact Russia has a history of doing those things … when it comes to Black people. That is why I’ve maintained that I do not believe it is in in our best interest to assume she had drugs on her,” Lawrence asserted. Abdulahi noted that the investigation into Griner’s arrest will continue until May 19.

Next, they discussed the assassination of Haitian President Jovenel Moïse and the unrest in the Caribbean nation. Abdulahi told viewers many Haitians have been fleeing their homeland due to the rise in kidnappings, gang violence, political instability and corruption following Moïse’s death.

Journalist Lionel Moise told Abdulahi that it is still unclear who killed the Haitian president. “Unfortunately, we’re not really much closer to where we were right after the assassination. It’s been months since the president was assassinated, and there have been several issues with this investigation including finding a judge to preside over this case. There are so many twists and turns and questions as to who is responsible — whether this was an inside job or not,” Moise explained.

Attorney Lana Marcus Joseph told Abdulahi many young Haitians are fleeing to the U.S. because Haiti has become a very dangerous nation.

“It is not safe to live in Haiti at all. I mean, imagine sitting at home with your families eating dinner and then bullets are flying. These are the things people are dealing with in Haiti all day long,” she said.

Switching gears a bit, Abdulahi talked about the fact that Black men make up less than two percent of public school teachers in the United States. During the “REVOLT BLACK NEWS Weekly” discussion, former grade school instructor Emir Davis expressed his reason for walking away from his dream job of teaching.

“I saw that no matter how hard I worked and the good that I felt like I could do inside of my classroom — that there was this sort of system that I had to exist in that was in my mind, noticeably and arrogantly ignoring the plight of my students,” he said.

Abdulahi informed viewers that during the 2020-2021 school year 50 percent of Black teachers had plans to quit their positions. Davis went on to say, “The most successful Black male teachers are those that have a network of folks who have shared experiences and aspirations and can push one another to [continue] in this profession.”

Later in the show, REVOLT Entertainment Correspondent Kennedy Rue McCullough attended a special screening for season 3 of Atlanta and spoke with Georgia State Representative Erica Thomas. Thomas gushed, “I’ve been waiting for [Atlanta] to come back out for so long. I love this show.”

Thomas is not alone as many fans are thrilled to see Atlanta return following a four-year hiatus.

Watch a clip from the Brittney Griner discussion up top. Plus, be sure to catch the next episode of “REVOLT BLACK NEWS Weekly” on Friday, April 1, 2022 at 6 p.m. ET on REVOLT’s app.