“How I handled it was very immature and kiddie of me,” Shyheim said on “Drink Champs.” 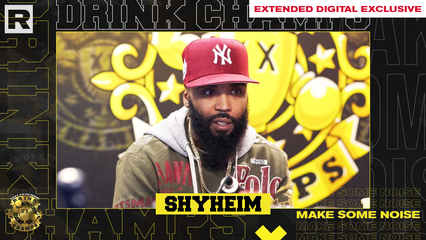 On the latest episode of “Drink Champs,” N.O.R.E. and DJ EFN linked up with Shyheim, also known as the Rugged Child, to talk about his career, experiences as a child star, and his prior discrepancies with the show’s hosts.

The Wu-Tang affiliate was born in Staten Island, N.Y., and got his big break as a teenager. Though he was never officially signed to the group, he frequently collaborated with Method Man and Ghostface Killah, and was known for his biting hardcore lyrics. In 1994, he released his debut album, AKA the Rugged Child, which peaked at No. 7 on the Top R&B/Hip Hop albums chart. From there, he went on to build relationships with numerous heavyweights in the hip hop industry including Big L and Big Daddy Kane. The latter also included him on his 1994 track “Show & Prove,” which also featured ODB, Sauce Money, and JAY-Z.

But rapping wasn’t the only talent that Shyheim had under his belt. He also delved into acting and appeared in the films Original Gangstas, In Too Deep, and The Preacher’s Wife, among many others. Additionally, he got the opportunity to star in the video for TLC’s 1995 single “Waterfalls.”

Unfortunately, despite his success, his career took a turn and he fell victim to the many perils that he rapped about. In addition to battling drug addiction, he also faced problems with the law. In 2013, he was arrested after police found heroin and a gun at his home. That following year, he was involved in a hit-and-run in New York that left one man dead. After originally fleeing the scene, he turned himself in one month later and pleaded guilty to second-degree manslaughter, among other offenses. Shortly thereafter, a New York judge sentenced him to 14 years in prison. He was released in 2020 after serving nearly six years.

These days, Shyheim is attempting to put his past struggles behind him, and he wants to lend a helping hand to people in need. He launched a podcast called “The Rugged Road to Recovery” where he interviews guests battling addiction and substance abuse.

To help give fans a recap, REVOLT compiled a list of nine facts we learned from the Shyheim interview. Check them out below.

Shyheim signed to Virgin Records at the start of his career and at the time, Janet Jackson was his label-mate. He revealed on “Drink Champs” that while he never met the star, he did get the opportunity to meet her brother Michael while recording at Sony Studios in New York. “I told him I was Shyheim from Wu-Tang,” he said. “He was like, ‘I love you guys, I love your music.’ I was so hype, I ran back and told everybody. Then, we were all taking pictures. We didn’t last five minutes after that. Next thing the phone rang, [and we were told] you guys are going to be moved to the other building.”

2. On Being Famous While in Jail

After becoming a hip hop star as a teen, he left everything behind when he had to go to prison in 2014. When asked by N.O.R.E. if it was hard being famous in jail, the rapper explained that he always remained true to himself and others respected him for it. “For me, I always remain the same,” he said. “I’m one way, I only know one way to be. So, I always took ‘me’ wherever I went. I used the penitentiary as a university. So, that’s how I carried myself and fortunately, there were a lot of brothers in there that related to me and felt like I was their brother.”

3. On Using Hip Hop to Help the World

Shyheim came of age during the golden age of hip hop and while the genre had grown tremendously since its early days, it certainly wasn’t the global sensation that it is today. The rapper explained that while he is impressed with hip hop’s growth these days, he believes more has to be done to help improve the conditions of urban communities across the globe. “[We can] use our popularity and our voices to clean up the community and start businesses,” he said. “We can use our voices to just tell people how to go about it. One thing we lack in our community is the information. If I would have learned half the things that I’ve learned along my journey, I wouldn’t have stumbled as much. And that’s what other people do in their communities. They give them information. In our community, everybody just goes for self when they make it.”

4. On Cleaning Up His Act as a Child Star

Shyheim showed early on that he was wise and beyond his years, and touched on a variety of heavy topics like violence, drugs, and sex. On “Drink Champs,” N.O.R.E. asked the rapper if he was ever told to clean up his act to appeal to younger audiences and he confirmed that it was suggested to him in the past. In fact, he was offered an opportunity to join the group Immature under the condition that he cleaned up his act. “[I was told] be a little clean to join Immature,” he said. “It was a lot of money. But this is what I love about coming from where I come from. It gives you this thing called ‘fuck it.’ And it’s like yo, for my principles and my pride, fuck it. It’s like this is who I am.”

5. On His Beef with Raekwon

Though Shyheim was once Wu-Tang’s prodigy, his relationship with the group, particularly with Raekwon, soured over the years. The beef eventually led the rapper to put out a diss record against Rae in 2008 called “Hold That Thought Fatboy.” But after years passed and he had the opportunity to reflect on their relationship, Shyheim explained that he had a change of heart. “I had big expectations, and in my mind, I thought that Raekwon and Wu-Tang should have been doing more for me,” he said. “I wasn’t looking for a handout. But I was still immature. And I didn’t realize where he was in life as a man. How I handled it was very immature and kiddie of me. Once I started to come into my own understanding, I gave him a sincere apology.”

Big Daddy Kane served as Shyheim’s mentor during his rise as a young emcee. During the interview, Shyheim told a story about how Kane pulled up to his neighborhood to meet him after not getting the opportunity to talk to him at a concert. Once he pulled up, the OG invited Shyheim to take a trip with him in his limousine. “Everybody thought I was missing,” he said. Grown women were feeding me French fries [in the limo]. He called me his son.”

Though the trip was exciting for the young emcee, Shyheim explained that his Wu-Tang cohorts were not pleased. “[They were like] he trying to make you a sellout,” he said. “You supposed to be the Rugged Child.”

On a previous episode of “Drink Champs,” the hosts welcomed Mickey Factz and a few other emcees from the 2009 XXL Freshman cover. During the interview, Factz told a story about Wu-Tang and the “Drink Champs” hosts referred to Shyheim and other Wu-Tang affiliates as the group’s “flunkies.” Shyheim incited the rapper to release numerous rebuttal videos on social media. Then, N.O.R.E. and EFN issued apologies, and settled the beef by appearing on his podcast and inviting him on “Drink Champs.” Now, according to Shyheim, everything has been straightened out. “It’s peace,” he said. “I’m glad we can sit here as grown ups and work through something because that’s the problems with people today. They don’t take the time to work it out. I commend y’all for doing things the right way. It’s water under the bridge. I appreciate you getting on my podcast and making it smooth and making things right.”

8. On “The Rugged Road to Recovery” Podcast

Both Shyheim and his mother battled drug addiction. He explained that after getting his life together, he wanted to create a platform that honored her and help individuals with similar issues. “Most times, people just don’t have [anybody] to talk to in those breaking moments,” he said. “A part of our community is the people that struggle with drug addiction and hustling drugs that’s trying to correct their errors. [The podcast] is a place where they can come get their strength and vent… as well as celebrities dealing with the same issues. It’s just a smooth spot to have conversation.”

When Shyheim was on Virgin Records, he befriended Big L who was signed to Columbia. The two emcees performed alongside each other on the 1999 track “Furious Anger.” However, Shyheim revealed that the two were scheduled to record another song together on the same day that Big L was murdered. He said that he knew something was wrong when the rapper didn’t show up to the session. “We was recording the second record and I was in Quad Studios,” he said. “L wasn’t the type to bullshit you. If he told you 8:00, he might have been 8:30, but he wasn’t showing up 10. I’m calling around, calling around. Then, I finally called Lord Finesse. They was like, ‘He just got shot.’ And I lost my friend that day. When it happened, that shit fucked me up. He was never late. I didn’t know that happened, but I knew it was something because he wasn’t one of those dudes to play me out. That shit was hurtful.”