“We really have to restore our sense of community and get our city back because I believe during COVID, America was using Atlanta as its playground,” Reed said on “Big Facts.” 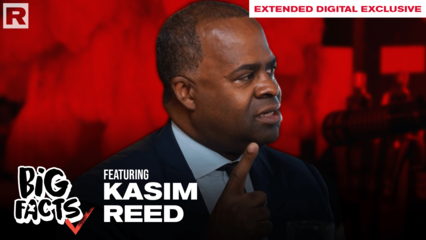 DJ Scream and Big Bank are back with another episode of the “Big Facts” podcast with Atlanta’s former mayor, who’s now running for office again, Kasim Reed. The politician joined the group at Breakfast at Barneys to discuss several topics including his current campaign, his goal to lower the crime in the city, and his stance on legalizing marijuana.

Born in Plainfield, New Jersey, Reed, whose full name is Mohammed Kasim Reed, moved to Georgia when he was just an infant. He would later go into politics and eventually run and serve as mayor of the Georgia state capital for two terms from 2010 to 2018.

However, after a brief hiatus, Reed wants to give the mayor position a third-go round in hopes of making the city a safer place. The attorney had long been quoted stating that the crime rate was its lowest in 40 years during his tenure. Reed is now looking toward reestablishing that sense of safety and bringing Atlanta back to where it once was.

“We really have to restore our sense of community and get our city back because I believe during COVID, America was using Atlanta as its playground,” Reed expressed. “So, everybody was coming to Atlanta ‘cause we were still open and the behavior that’s not typical for our community, people saw and then it leads.”

Reed believes the change Atlanta needs can occur when the approach to the issues is changed. The candidate believes in not only tough talk but actions to ensure the city’s people that he and his team are here to help. The politician plans on doing that with several initiatives through partnerships with local and giant corporations.

When asked if he supports defunding the police, Reed opposed the idea. “I don’t defund no police. I don’t believe in that. We have to have police,” he expressed. However, Reed doesn’t want people to misinterpret his stance on policing. He reminded listeners that during his time in office, he pushed for many things beneficial to the people he represents including independent investigations following police-related shootings and the use of body cameras on all officers. He continued, “People acting like I’m walking around acting tough on crime, naw, I’m real reasonable.” Reed appears to be confident that he’s the candidate to help reduce Atlanta’s crime rate, which he stated shot up 60 points since his term.

Another objective on his list includes plans to assist his people in the fight against gentrification — with his first piece of advice telling residents not to sell their homes. “The mayor ought to be going everywhere and open up every comment with ‘don’t sell’ and if somebody talking to you about buying your property because of a property tax situation, call me,” he explained. “Because the last I checked, I left the city with $200 million in cash. So, I left the biggest case reserve in the history of Atlanta. When I walked out of that door for all that talk, I’ll tell you what money wasn’t missing, that $200 million. It was all there.”

Cannabis is still illegal for recreational use in Georgia. However, it has been decriminalized in specific cities across the state. Reed later expressed his thoughts on the matter and what adjustments he plans on making if elected. “I think the marijuana scheme in Atlanta should be like the marijuana scheme in San Francisco. I think we need to start with [medical] marijuana, and then I think we do need to see how we do handle [medical],” he explained. “I don’t believe we should start with wide-open marijuana sells all the way across the board, straight out of the gate.”

Reed strongly believes small steps should be taken so that everyone involved in the business of marijuana can be prepared for when the time comes for full legalization. He added, “I also believe in using the city’s ability to either ban it or cooperate with it to make sure that Black entrepreneurs are at the table in a real way and not left by the wayside.”

If you like what you heard, be sure to stay tuned every week for new episodes of “Big Facts.” Also, don’t forget to watch the latest show above!