The collaboration will appear on Sullivan’s forthcoming album ‘Heaux Tales.’

Big news for fans of Jazmine Sullivan — this Friday, the songstress will liberate her fourth studio album Heaux Tales. The release will follow the well-received singles “Lost One” and “Pick Up Your Feelings,” and was originally announced last year via a promotional video that further explained the album’s concept:

“I wrote Heaux Tales to give a voice to every woman. We’re deserving of respect whether we work as a CEO of a company or we strippin’. ... It’s about a woman deciding how she wants to present herself to the world and not being told or influenced by anyone but her gotdamn self...”

Before Heaux Tales touches down, we get to check out another single from the LP for “Girl Like Me,” which is produced by Bongo and sees additional assistance from H.E.R. The track sees the artists reflecting on possible reasons why their respective significant others left the relationship for someone else: 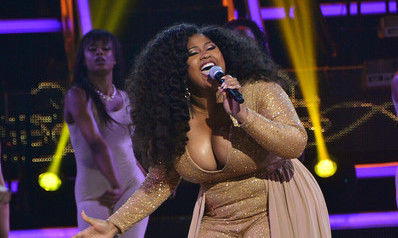 “Knew it was real when you blocked me, now I sit at home judgin’ my body, wondering what I did to lose you, why in the hell you ain’t choose me? Why you don’t love me no morе? And I don’t even know what for.../”

Heaux Tales will be Jazmine Sullivan’s latest album since 2015’s Reality Show, which contained 11 cuts and a single assist from fellow Philadelphia artist Meek Mill. Considered one of Sullivan’s best bodies of work, Reality Show peaked at both the number 2 and 12 spots on Billboard’s Top R&B/Hip-Hop and 200 albums charts, respectively.

Check out both “Girl Like Me” and the tracklist for Heaux Tales below.