The track is accompanied by a powerful short film to match.

Of the many celebrities that have either spoken out against systemic oppression or provided to the ongoing protests’ soundtrack, Tyrese has certainly become one of the most vocal — here even recently travelled to Washington D.C. for the second March On Washington, 57 years after the iconic, life-changing event first took place. He also took this opportunity to release a new visual titled “Legendary,” which features assistance from CeeLo Green and sends a direct message to those in power that allow Black lives to continue to senselessly perish. Tyrese further explains the offering via press release:

“Legendary is powerful because the music and the video are meant to shift how we are seen. We’re in the middle of a revolution. As Black people we are fighting two pandemics: COVID-19 and Systemic Racism. The video painfully underscores the plight of our community, while asserting that Black Lives Matter.”

The 2020 March on Washington: How are we still here all these years later? 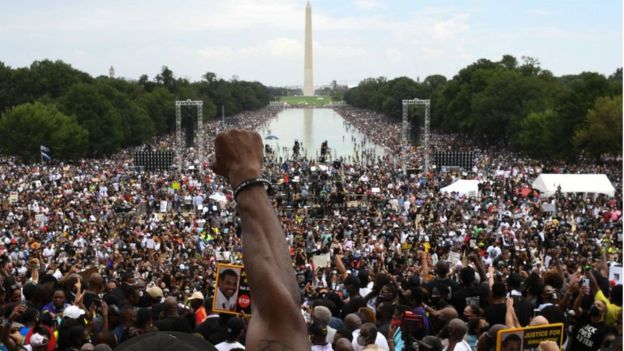 The clip is directed by Deon Taylor and intentionally clocks in at 8 minutes and 46 seconds, the exact amount of time that Derek Chauvin held his knee on George Floyd’s neck in Minneapolis. The clip begins with Tyrese’s chilling portrayal of a man in Floyd’s position, unable to breathe while a helpless crowd stands nearby, before showing several clips of current protests all over the country while the collaborators performing the hard-hitting cut in militant fashion. Those scenes are then following by different messages about Breonna Taylor, Donald Trump, and Martin Luther King, Jr. The end of the heart-wrenching clip returns to the initial scene, where a bystander risks his life to save Tyrese by tackling said cop, saved by a Black woman on the force to takes action against her own.

Tyrese also revealed on social media that many attempted to keep the video from ever seeing the light:

Press play on Tyrese and CeeLo Green’s “Legendary” below.