×
find us on /
Black Girl Stuff

For us, by us: Introducing the cast of REVOLT's new talk show, "Black Girl Stuff"

On July 26, REVOLT announced its newest talk show “Black Girl Stuff” would be premiering today (Aug. 9). The female-driven series was created explicitly for millennials and Gen Z, and it primarily focuses on curating culturally relevant discussions from the Black woman’s perspective.

“Black Girl Stuff” is the perfect example of content that is “for us, by us,” as the series cast isn’t the only aspect of the show that’s driven by Black women. Behind the scenes, a team of Black female creatives is producing the series. REVOLT CEO Detavio Samuels had this to say about the show: “Black women have proven to be the most influential demographic driving culture across categories, and ‘Black Girl Stuff’ provides a platform to explore important topics through their lens in a way that will empower Black women to speak their truth, share their stories and embrace their power.”

The show includes a panel of four Black women — Akilah Ffriend, Brii Renee, Demetria Obilor, and Tori Brixx — with Kennedy Rue taking on the role of correspondent. Before you watch the premiere episode of “Black Girl Stuff,” take some time to get to know the girls below. Tori Brixx is an actress, model, celebrity DJ, artist and host. You may recognize her from her many appearances on Nick Cannon’s MTV show, “Wild ‘N Out.” She’s a Dallas, Texas native but eventually relocated to California to focus on her career. Brixx has modeled for a multitude of brands, including Buscemi and Beats by Dre. In addition to appearing on “Wild ‘N Out,” she has also been seen on VH1’s “The Amber Rose Show.” Beyond Brixx’s work in entertainment, she has a special passion for philanthropy, primarily focusing on breast cancer awareness, voter registration, and gender equality.

“I’m excited to be a part of a platform that allows Black women to be authentically themselves. My goal is to inspire and to give a voice to young girls and women who might need to be reminded that they are enough,” Brixx said about her new role as co-host on “Black Girl Stuff.” Demetria Obilor is a hosting extraordinaire who’s worked in everything from local broadcast news to sports. Her bubbly personality and stylish on-air and off-air looks have garnered over 1.5 million combined followers on Instagram, TikTok and Twitter. Obilor attended and graduated from the University of Kansas,  where she majored in broadcast journalism before beginning her career. She’s worked on air as a broadcast journalist at ABC Dallas, NBC Kansas City, and CBS Las Vegas. In addition to her broadcasting jobs, Obilor hosted her own digital show titled “IAMSTILLUP” and has interviewed everyone from NBA superstar Matt Barnes to NFL athlete and businessman Derrick Henry.

When discussing “Black Girl Stuff,” Obilor spoke a bit about her previous experience in television and what separates this show from the rest. She expressed, “I’ve worked on television for almost a decade, and ‘Black Girl Stuff’ is the first show I’ve been a part of that’s tailor-made for millennial/Gen Z audiences. This series brings the Black girl experience to life with co-hosts who hold absolutely no punches! Whenever I’m on set, I have to pinch myself because our on-air team, executive producers, and show’s creator Monique Chenault are all Black women. There’s real history being made at REVOLT Media and TV, and I’m thrilled to join the family.” 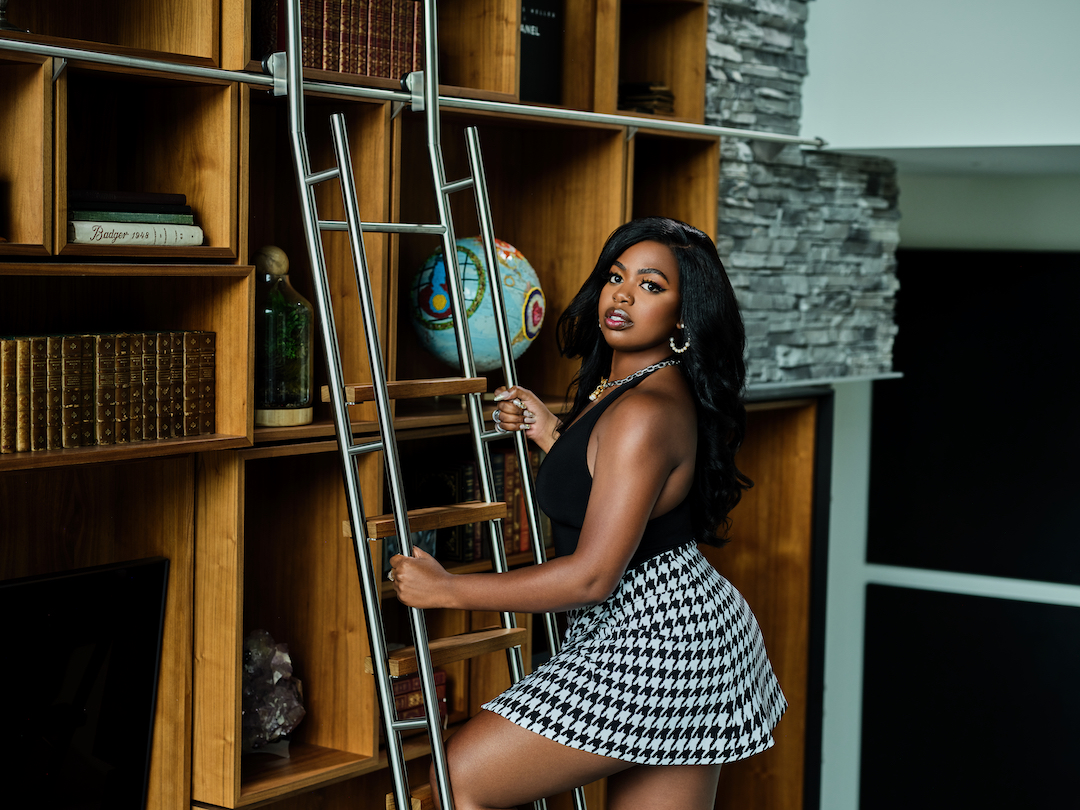 Akilah Ffriend has found success in a multitude of avenues in the entertainment world, including as an on-air talent, digital content creator, and media executive, to name a few. She worked as a management consultant at Ernst & Young, a TV and film studio dealmaker, and as a partnerships lead at major entertainment companies like NBCUniversal, HBO Max, and Apple TV. Ffriend has also worked for online publications such as Afterbuzz TV, Cheddar Media, and For(bes) the Culture. Beyond her work, the young go-getter is a member of Alpha Kappa Alpha Sorority, Inc.; a University of North Carolina at Chapel Hill alum; and she holds an MBA from Columbia Business School.

Ffriend took the time to speak a bit about what “Black Girl Stuff” means to her: “I’ve had many ‘Pinch me’ moments, ‘Thank God’ moments, and, most importantly, ‘I’m built for this’ moments in preparation for “Black Girl Stuff”! I’ve been straddling both sides of this entertainment space for some time now, working my way up the corporate ladder as a TV executive but also showcasing my creativity as an independent podcaster and digital on-air host. Before this opportunity with REVOLT, I was starting to feel like there wasn’t a lane where I can truly see success being my full self and celebrating both being fun but also informative. I’m looking forward to what this show will mean for the culture and what being on this show will mean for multifaceted, trailblazing women like me.” Brii Renee, also known as “Your Favorite Radio Bae,” is a true jack of all trades. She’s a radio personality on 94.5 FM in Atlanta, an actress, a social media influencer, YouTuber, and host. She majored in film and television at Georgia State University, where she produced and starred in her online talk show, “In Da Crib.” Renee graduated in 2013 and immediately began pursuing her career in acting by starring in several independent films. With over 570,000 followers on Instagram, TikTok, and Twitter alone, her work has garnered an impressive audience.

When asked how she felt about being selected as a co-host for “Black Girl Stuff,” she said, “I’m so excited to be selected as a co-host for this much-needed conversation and host-driven show! As a Black girl in media, I’ve always dreamed of being able to be myself in totality through my work. As Black women, we often feel like we have to code-switch or hide different sides of ourselves depending on who we’re around. With REVOLT as my new home, I’m SO excited to be on a platform where I can be authentically myself! I know that with this show, we’re giving Black women and girls everywhere the confidence to be 100% themselves in their everyday lives.” Kennedy Rue is an actress, host, and entertainment consultant best known for her work on “REVOLT Black News.” You may recognize her for her acting career as well, as she played the role of Jeannie in the 2003 comedy Daddy Day Care starring Eddie Murphy. She has also interviewed stars from several entertainment sectors, including Wale, Jay Ellis, Angela Bassett, Jada Pinkett Smith, and more. Rue, who notably attended and graduated from Spelman College in 2020, will be joining “Black Girl Stuff” as a correspondent.

Tune into the “Black Girl Stuff” TV premiere tonight (Aug. 9) on REVOLT at 9 p.m. ET. Also, be sure to check back every Wednesday for weekly episodes available on our website, YouTube channel, and the REVOLT app.