Teyana Taylor and Courtney Gilbert want people to see their production company not only as a hub for creating eye-catching content, but as a safe haven for the creative underdog. 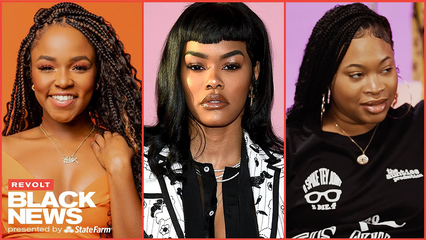 Teyana Taylor and Courtney Gilbert on The Aunties (clip)

Being Black, in what sometimes feels like all spaces in America, has long been a difficult task despite any level of education, skills and expertise. Workplaces have seemingly become ground zeroes for Black employees to face various micro-aggressions, making for an uncomfortable career experience. These employees have often detailed their problematic situations, which include being questioned over something as simple as their natural hair. Though some states have adopted laws such as the CROWN Act, which prohibits race-based hair discrimination that may result in the denial of a job, more needs to be done. Luckily with a recent surge in Black-owned brands and Black lead companies has provided a glimmer of hope that Black employees can start to feel like they belong in their workspace despite the color of their skin or the feel of their hair texture.

In the latest round of REVOLT’s “Stand Up For” series, presented by State Farm, host Gia Pepper sat down multi-talent artist Teyana Taylor and her longtime collaborator, dancer, and creative-director Courtney “CoCo” Gilbert to talk about their brainchild, The Aunties, an all-female production company; the inspiration behind it, and what being Black in workspaces means to them.

“We in an industry where, at one point in time, almost like being pregnant was a burden… To the outside world, it’s like, ‘Oh my God…You’re married…you gotta keep this a secret…’ And just to watch artists go through that. How do we break that? How do we break that cycle?” Taylor said. “‘Cause guess what? We’re going to keep getting to the coin, getting to the bag ‘cause ain’t nobody gonna get to get it for us.”

As many fans of Taylor may know and have expressed on their social media platforms over the years, the mother of two has seemingly often been overlooked. Many feel the “Rose in Harlem” songstress’ talents haven’t been awarded its proper credit.

However, even as she faced workplace insecurities, Taylor has always proven she can bounce back. For example, shortly after announcing her retirement as a musical artist in 2020, the singer promptly reappeared as creative director for apparel brand PrettyLittleThing. She has even released a few collections of her own with the company.

Gilbert says what ultimately pushed them to create their own production was constant rejection. “We got told no, a lot,” she said. “So, it was like ‘No.’ We’re like, ‘What do you mean, no?’ We just tired of the label telling us no. Like, we’ll get excited about all these ideas, we’ll have rehearsals, we’ll be like, ‘Oh yea, we ‘bout to shoot this video and we ‘bout to have this in it, we ‘bout to have that in it… and then it’s like, ‘They didn’t clear your budget.’ Or they didn’t do this, or they didn’t do that. So, we started doing our own stuff. It was like, cool. If it’s gone costs $300, let’s figure it out…”

Yet, for some, making a career pivot may not seem accessible, but Gilbert argues it takes motion and some accountability. “I feel like a lot of people get complacent,” she explained. “You know, a lot of people are like, ‘Yeah, I’m not gone do it ‘cause I’m scared or I’m this, I’m that.’ It’s like, if you gone do it, just do it… You have to have some action. Like, what are we doing? We can’t sit here all day… I can’t sit at a desk all day,” she added.

To Teyana, being Black in the workspace means creating a “safe space” for Black people because “there is no space for us.” She continued, “We can’t even go to the store. We can’t even get no skittles. We can’t even walk home. You get what I’m saying? So, let alone, you think they about to just let us create without it being a catch?”

Taylor highlighted a too-common struggle Black creatives experience in the industry: Having their ideas plagiarized and even sometimes blatantly stolen, which often results in white creators garnering credit and monetary gain for ideas that don’t belong to them.

“Let us create… once we create, ‘Oh, thank you, now you can go back to the backburner…’” the creative added. “You don’t get no equity, backend…” Peppers chimed in. “It’s giving Cruella motha’,” the director quipped.

The “Gonna Love Me” singer believes being Black in the workspace also serves as a resource to other members in the community. “And to save our people from the street because they turn to the streets when they family don’t understand what they got going on and don’t believe in their dreams. So, we’re like the ‘aunties,’ you know?” she said.

Taylor and Gilbert’s company appears to be built on a “it takes a village” foundation. “Everybody got that favorite aunty. And that’s what it is for us. We are very nurturing and that’s even how the name came up. We always call ourselves aunts. We act like aunties. We be gossiping like aunties. That’s how we are, but I honestly noticed that a lot of young folk love being around us — a lot of young creators,” the star added.

Taylor and Gilbert want viewers and creatives to see their production company not only as a hub for creating eye-catching content but as a safe haven for the creative “underdog.”

Tune into “REVOLT BLACK NEWS’” “Stand Up For” series for the entire conversation with them above.