“He’s not a controlled individual. So, I love him ‘cause you can’t control him,” well-respected hip hop manager Deb Antney said on “Big Facts.” 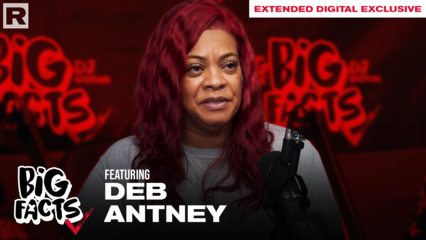 “Big Facts” with Big Bank and DJ Scream is back with another exciting episode featuring business mogul Debra Antney.

First things first, Ms. Deb cleared the air on where her support lies with Former President Donald Trump. Late last year, the entertainment manager caught some flak for publicly speaking out in favor of 45.

“It ain’t that I’m in love with him. First off, democracy is what? And that’s what you have to think about. It has nothing to do with anything,” she explained. “I’m a keep it a hundred with you, I ain’t vote for neither one of them. I said if I had to vote, I would go there ‘cause he’s the lesser evil.”

She continued: “I’m a realist, you understand? So, he sugarcoats nothing. He lets you know what the hell is going on. You know already. He’s not a controlled individual. So, I love him ‘cause you can’t control him.”

21 Savage made a random cameo by way of Big Bank’s phone, but it wasn’t as unexpected as what Ms. Deb had to say next.

When asked how she felt about Trump and the differences in his response toward the killing of unarmed Black people compared to their white counterparts, the mogul told the crew that her focus and pain stood with the parents of those whose lives were taken, being that she too has lost children.

Moving right along, Ms. Deb harped on how entertainment had always been a way of life for her, revealing that the medium served as a distraction from other issues that she was dealing. And after several brief visits to Georgia, the manager said she made the big move to the peach state around the mid-90s. However, what many may not know is that she also ran in the 1996 Olympics, which was held in Atlanta. “And my number to my torch was 007. I ran. There was a lot that I did here,” she explained.

“That was my start off. My introduction was really coming into Georgia was doing things because I came from the department of family and children services, BCW, which is the bureau of child welfare in New York, and I did DFACs here, and I learned the city,” she continued.

Surprisingly, Ms. Deb told the crew that she wanted nothing to do with music when she initially moved to Georgia — having already been in the music business back in New York. Instead, she wanted to focus on her family and rebuilding herself. “I was a brand new person here in Georgia. Nobody knew me. I ain’t know you. You ain’t know me. And I got to really live and take care my children and do the things where I’m not gonna go to jail or I’m not gonna end up six feet under cause I really was about that life,” she said.

When asked about her stance on working with clients who were essentially blackballed by the culture, she admitted that most of her artists had their struggles but ultimately found success. “Damn near everybody I had… well I will go here, I’m not gonna say everybody cause Juice actually made it in New York quick. They loved Juice,” she explained. “Nicki [Minaj] was thrown where she couldn’t be in New York… Gucci [Mane] was damn sure blackballed, and you know that shit… French Montana couldn’t do nothing. So, when you look at these things, it don’t matter what they are if the street throw you away. It’s who the next people that stamp you that solidify you from the streets. That’s where it becomes a little bigger.”

Further elaborating, Ms. Deb broke down the strategy she used to gain success for some of her clients by moving them to different cities where they’d gain quicker traction. Still, the ride for folks like French Montana wasn’t easy, another reason why Ms. Deb said she had an issue with the way stories are told in the music business. “Why not keep it 100 and keep your struggle going here?” she asked Big Bank. “That’s when it’s good. You should be proud that you evolved from the dirt, and you came up. Something that they said couldn’t grow is not growing.”

Scream then asked the former manager what led to those relationships severing. “The separation, let’s start with Gucc. I did not get fired by Gucci. When we sat down and talked about him cleaning himself up, he said to me, ‘Auntie, I need people to respect me.’ He said, ‘When you walk in the room, they respect you and they talk to you, even when they’re talking about me, they talk over me, and they talk to you. I want to learn how to be a man to run my company.’” Deb revealed that after making a promise to clean him up and making a few financial exchanges, they pair parted ways. She did admit there might have been some issue between her and the “So Icy” rapper after she signed rapper OJ da Juiceman, but she says it wasn’t an opportunity she was willing to let drop.

As far as her other clients, Deb explained that the environment of the industry played a huge role in how the relationship ended, but for the most part, she stood by every action she ever took for them.