Mannywellz just announced he signed for a million.. or did he?

Although there was a general consensus that this year’s April Fool’s jokes were a bit lacking, there was one artist who took it upon himself to have fun with the holiday anyway. The DMV’s very own Mannywellz planned a calculated roll-out for his latest music video for his Wale-assisted “A Million” track, and it was very successful to say the least.

Last Thursday, Mannywellz posted a short video clip on social media of him signing a document and captioned it: “Waited a long time for this, but I just signed for a million, grateful.” As expected, he was immediately showered with well wishes and congratulations messages. The “A Million” title for his new music video that would premiere the next day seemed more fitting than ever. 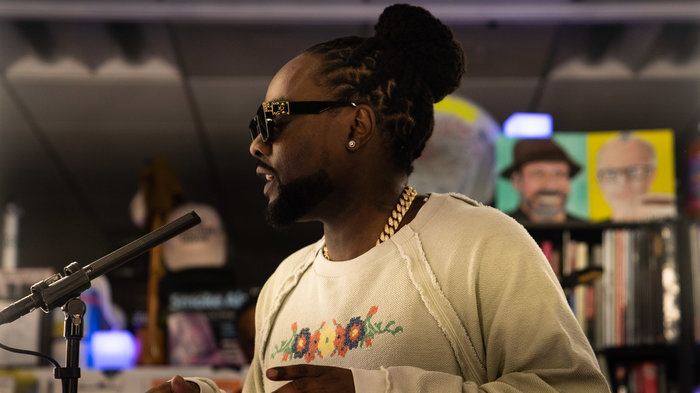 The following day, he broke the “gotcha” news to fans. He revealed he actually didn’t sign any deal and reassured he loves being an independent artist. Regardless, with all the attention on him, he shared the well-received visual for “A Million,” which sees him cruising around in celeboratory bliss.

The song is taken from his October project Mirage, which included seven tracks and boasted guest appearances from VanJess and Tems. Mannywellz can also be heard on Wale’s 2019 project Wow… That’s Crazy on the song “Love & Loyalty,” and “No Drama” off Sun-El Musician’s December release To the World & Beyond.

Most recently, Wale shared his “Good Vibes (Za)” track and also teamed up with Griselda/BSF Records for “The Hurt Business” alongside Westside Gunn, Smoke DZA and Wale, and also with Davido and Cheque for the “ZOOM (Remix).” Prior to that, Wale linked up with EarthGang to unleash their collab track “Options,” a cut fans have been seeking since April. Back in June, Wale surprised the world with an EP titled The Imperfect Storm.

Be sure to watch Mannywellz’s music video for “A Million” down below.