“I was going to go the way of the Samurai and just smash myself because I was to the point where I didn’t want to live anymore,” Kevin Gates revealed. 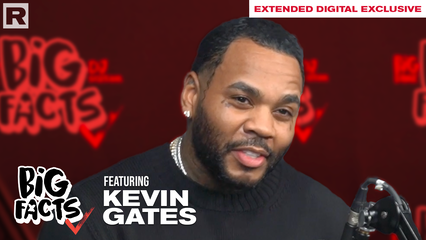 Big Bank and DJ Scream are back with another serving of the “Big Facts” podcast. This week, Kevin Gates stopped by for an in-depth conversation surrounding mental health, music, and more.

In a community and industry where sometimes being vulnerable and showing emotions is traditionally frowned upon, some artists have decided to go against the grain and promote positive lifestyles, and ways of thinking in an effort to rewrite the narrative. Gates, who has not been too shy to talk about his own struggles with mental health and spirituality, opened up about keeping that momentum going.

“I battled with it for a long time. I said it on one of my songs called ‘Fairytale.’ I talked about getting sexually victimized when I was a child, and that’s what led to me being super aggressive,” the 35-year-old said.

“But then I realized that through taking all these different martial arts and learning how to surrender…,” he continued. “Man, I’m free. I don’t care what nobody thinks about me. I was brave when I spoke about it… When I did that song — just release. It was my first time speaking about that.”

Last October, the “Really Really” emcee announced that he was taking a break from social media, citing that it was affecting his mental health and causing him to be depressed. However, Gates revealed that his battle began well before that. In December 2020, the New Orleans native shared that he was prepared to take his own life with plans already set in place.

“I’ma say something on here that I never said before. Dec. 10 through the 12 was the hardest for me… I don’t do the ‘Man, I’m about to kill myself.’ I don’t want no attention. I don’t do no horse-playing — that’s horse-playing, when you talk about it. I was going to go the way of the Samurai and just smash myself because I was to the point where I didn’t want to live anymore,” he explained. However, Gates said that following a rare encounter with a fan, he gave himself three days to reflect before making the fatal decision.

When asked what triggered him to reach such a dark point in his life, Gates admitted he was unhappy and noted that many men suffer from being unhappy, but they typically choose to suppress their feelings.

The rapper continued that he avoided going home at times because he felt like he wasn’t embraced before stressing the importance of self-care. “It’s OK to have your man cave. You have to go in your solitude and have time for yourself in order for you to release,” he added.

Elsewhere, the “2 Phones” emcee shared his interest in getting into the acting industry — a transition successfully made by several rappers including Joey Bada$$, Dave East, Ice Cube and more. “They would have to put me on ‘Power,’” he said. ‘See, I wouldn’t be the man. I’d be the man in between the man… I’ma be something true to who I am. I’m the protector.”

Later, Gates spoke about his influences including the late boxing legend Muhammad Ali.  “I’ma show you how great I am. He suffered. They made it hard for him, but he smiled. He found a way to smile through it all,” Gates said. “He died doing what he loved. And I had really put it in my mind — this music — I love it. Ima die for this shit. I love it. I can’t stop. I’ma die for it. I love it that much. When a man meets his mission, he and his mission become one.”

Kevin Gates drops off new single "Bad For Me"

Kevin Gates drops off new single "Bad For Me"