Rick Ross said a liability to one person can be an asset to another. You just have to know how to use it correctly. 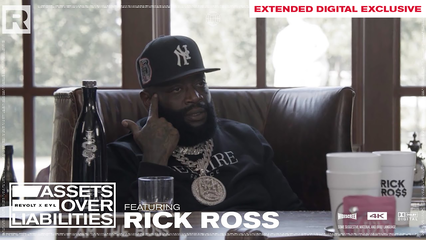 The estate sits on 235 acres of land, holds 109 rooms — 12 of which are bedrooms and 21 bathrooms making it the largest single family home in the state of Georgia. The impressive swimming pool holds 350,000 gallons of water, which also makes it the largest residential pool in the entire United States. The trio sat down to discuss how Ross has gone from hustling in the streets to building a $45 million empire — one where his closest loved ones like his mother, sister and son can reap the rewards of his wise investments.

Seated in Ross’ office, viewers initially notice traces of his success placed around his desk. Bottles of Belaire champagne, a bag of Rap Snacks potato chips, cups from fast food chains Checkers and Wingstop, a zip from his personal Pink Rozay Marijuana strain, the shaker blender from his CTRL meal replacement powder, and of course his several platinum plaques are all on display. Instantly you know you’re listening to a business mogul.

After Ross took a seat, he sparked an L and poured a shot of Villon Liquer Cognac — one of his several investments. Co-host Bilal kicks off the conversation by telling Rozay how he was taken aback by the free range horses prancing around the compound and the massive man-made pond at the entrance. As a native New Yorker, he compared it to Central Park. The rapper revealed that he had the lake dug up and filled with only the fish his mother wants to eat.

Millings wanted to know how Ross determines what’s an asset. He explained how it’s unique to each individual based on the role they play in life. The star used the example of his 15-passenger private jet to explain. He rents out it out when he’s not using it to his other “boss” friends. “It’s an asset for me. Whereas the guy who makes a move only once or twice a month. For him, it’d be a liability,” he said.

This way of thinking is also how he intends to make “The Promise Land” work for him in a way the previous owner didn’t. “The homie that owned this [estate] before me made $50 million a night. $550,000,000 plus came through his hands. What’s going to separate me from the mistakes homie made?” the artist said. “I began going down my mental list, ‘Well here’s what I’m going to do different.’”

This is a lesson he learned the hard way from an investment he made early on in his rap career when he purchased two yachts in Miami. The boats were liabilities, as they cost more to maintain than he was making by owning them. “You don’t really realize just how much time you’re really away from these boats,” he recalled. “If I go out of town, by the time I come back it’s something that needs to be done. I didn’t put no business behind it.”

Ross has not only leveled up his business savvy by investing in his lifestyle. Such as the partnership with John Deere, the brand of ride-on lawnmowers he actually uses to maintain his massive estate, the rapper has also employed the people who were there from the beginning. His mother and sister are on his payroll and he explained to his friends that they would not get rich from just being around him. They needed to learn new skills to contribute, such as driving him around and problem solving before issues make it to the biggest boss.

As for making his assets work for him, “The Promise Land” rakes in even more cash in film production. The property was used to film Coming 2 America, and he has plans to utilize the baseball field as an amphitheater for other musicians and comedians to perform. Ross refers to his additional passive income as “confetti.” “It’s just falling,” he said. “I like to look up and the dollars just hitting me in the face,” he said as he spun his blinged out MMG chain.

Ultimately, Ross makes it easy to know what to invest in and what to pass on: “It should be something that when I see it (snaps), I fuck with that. When you got to sit there and sell me on it, I doubt it’ll come to me, but if it’s something I naturally fuck with, I’m with it,” he said.

Check out Rick Ross’ full episode of “Assets Over Liabilities” above!