Drake, Cole, and Kendrick Lamar are usually the main people included, while the fourth spot is vacant to spark debate. 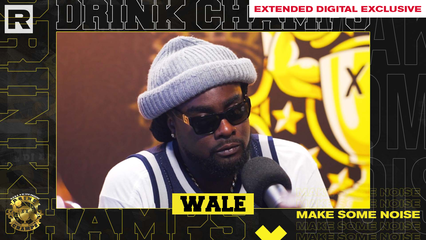 On the latest episode of “Drink Champs,” N.O.R.E. and DJ EFN sat down with Wale to discuss his career, recognition in the game, and more.

Born to Nigerian parents in Washington, D.C., Wale built a buzz in his native city after releasing the songs “Rhyme of the Century” and “Dig Dug (Shake It).” The latter song featured the emcee rhyming over a sampled go-go beat, something he continue to do over the course of his career. After becoming a local celebrity, he signed a production deal with U.K. super producer Mark Ronson. From there, the rapper continued to release several mixtapes, including the celebrated The Mixtape About Nothing, which was a concept project inspired by the NBC sitcom “Seinfeld.”

A couple years later, the artist was signed to Interscope Records where he released his debut album, Attention Deficit. Though it was well-received by critics, it had a modest commercial performance and debuted at No. 21 on the U.S. Billboard 200 chart. Shortly thereafter, the emcee was dropped from the label, and he was later signed to Rick Ross’ MMG label alongside artists like Meek Mill and Gunplay.

As time moved on, Wale continued to release new projects and attain commercial success. His 2012 single “Lotus Flower Bomb,” and his 2013 single “Bad” both peaked at No. 3 on the Billboard 200. Despite these accolades and several others, the emcee has lamented over the years about never receiving the same recognition as his peers like Drake, J. Cole, and Kendrick Lamar.

Now, with the recent release of his seventh studio album Folarin 2, Wale has nearly two decades in the industry under his belt.

To help give fans a recap, REVOLT compiled a list of nine facts that we learned from the Wale interview. Take a look at them below.

Today, Young Thug is arguably one of the biggest rappers in the industry and on “Drink Champs,” Wale recalled when he first heard Young Thug’s music. The D.C. native explained that he initially wanted to sign the rapper, but he knew he couldn’t afford to give him a deal. “It was early on,” Wale said. “We knew what he was going to be. Some niggas you just can’t afford. My appreciation for him as a friend and an artist is immense.”

On Wale’s latest single “Poke it Out,” he raps alongside Cole, who is his friend and frequent collaborator. But in 2016, many people thought the two were at odds following the release of Cole’s song “False Prophets.” On the track, the Fayetteville rapper indirectly takes aim at two rappers, which some people perceived to be Wale and Kanye West. Wale later issued a response to the record called “Groundhog Day.” When asked about “False Prophets,” Wale shrugged it off as no big deal. “We didn’t really talk about it that much,” he said. “We [just] talked the night before. We talked about kids and just life. I was a little caught off guard, but I was like let’s play. It wasn’t anything malicious.”

3. On Not Being Included in Hip Hop’s Mount Rushmore Memes

Over the past year, a hip hop Mount Rushmore meme has sparked heavy debate on social media. Often, fans will customize the graphic and include who they believe should be featured. Drake, Cole, and Kendrick Lamar are usually the main people included, while the fourth spot is vacant to create conversation. N.O.R.E. asked Wale if he’s bothered by the fact that he’s not a shoo-in for a spot on the graphic like his peers, and Wale revealed that while it may have bothered him at one point, these days he doesn’t let it get to him. “I don’t really care anymore,” he said. “Those who know, know what it is. I can’t get mad at someone who feels that way.”

“Poke it Out” is the first single off Folarin 2. The track, which was produced by Cool and Dre, features a sample that was also used by J. Dilla for Q-Tip’s 1999 track “Vivrant Thing.” Wale explained that the track came about after hearing Cool and Dre’s flip of the song in the studio, and the latter encouraged him to jump on it. “The great thing about Dre is he going to remind you [of how good you are],” Wale said. “He was like, ‘Not a lot of people can do this joint.’ And Cole came to the studio, and he listened to a couple records, and he was like he wanted to hop on that joint.”

Wale was one of the first artists that Roc Nation signed to manage shortly after the label’s launch. He officially parted with ways with them in 2014 and told Power 105.1’s “The Breakfast Club” that his decision was based on the label going into a different direction. However, on “Drink Champs,” he revealed that his choice to jump ship was because he was losing money while on tour with Cole and he couldn’t work out a resolution. “I was in the Hov cypher for a long time, and there was a time that I was on tour with J. Cole and at this point, I was opening for him,” Wale said. “And somebody in my circle was like, ‘You’re losing like 5 grand every time you go on stage. You’re losing money. I couldn’t make sense of it. I just really had a meltdown. And I remember, I just quit the tour. It’s been all love since. I learned it and I learned a lot from them. And JAY is still my idol.”

“Seinfeld” inspired Wale to create three projects: The Mixtape About Nothing, More About Nothing, and The Album About Nothing. The artist remembered meeting Jerry Seinfeld through his manager after releasing the first project in the series, and the two stayed in touch over the years. “At that time, I was really inspired by the show,” he said. “Jerry Seinfeld has a lot of philosophies in his show and in his stand up. So, I turned a lot of them into raps. Seinfeld had a show in Baltimore. And I remember [my manager] was like, ‘Jerry is here,’ and I met him, and we stayed cool.”

7. On Doing a Verzuz Battle

Over the course of his career, Wale has released numerous hits that would surely make him a worthy opponent against another artist in a Verzuz battle. When asked by N.O.R.E. who he believes he should be matched up against, the rapper revealed that he doesn’t believe he’s a good fit for the series. “I ain’t always been the most liked nigga or media darling nigga ever,” he said. “I don’t think about it that much. I don’t think that space agrees with my whole thing.”

Wale’s debut album, Attention Deficit, spawned the lead single “Chillin” that also featured Lady Gaga. According to Wale, the song came about after spending time in the studio with Cool and Dre. He explained that he was still new to the songwriting process, so he just followed their lead. “Cool and Dre was so understanding of me,” the artist said. “I think early on, Dre was like, ‘Oh shit, this is a nigga that knows how to dress and knows how to rap. He doesn’t know how to make songs.’ So, we was just coming up with stuff and just vibing and I was like I’m going to follow. So, most of [the song] was them.”

9. On Being Dropped From Interscope

A couple years after Wale was at the center of a bidding war between numerous record labels, he was dropped from Interscope shortly after releasing his debut. While it’s been reported in the past that his release from the company was due to the project’s low album sales, he explained that the reason he was let go was because of a dissolved business partnership between Ronson and Interscope’s Jimmy Iovine. “I didn’t really understand how much Jimmy Iovine and Mark was in business,” Wale said. “Something happened where they weren’t on the same page, and I was a casualty. That was a moment and I learned from it. I feel like I haven’t all the way recovered from that moment. Imagine being 22, 23 and being dropped from your dream job but you’re still popping in your city. I didn’t know who to blame. I didn’t even get mad.”