Big Bank and DJ Scream are back with another episode of the “Big Facts” podcast featuring special guest Pimpin’ Ken. 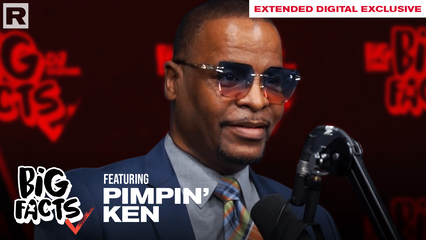 Big Bank and DJ Scream are back with another episode of the “Big Facts” podcast featuring special guest Pimpin’ Ken. The Chicago-born star stopped by to discuss his upbringing, his “management career,” pimpin’ and more.

Like many, Ken found himself in a lot of trouble growing up. He revealed that at an early age, he caught his first federal charge for fraud and was sent away to prison. Ken claims he was one of the youngest inmates at the facility. He said that he managed to stay out of trouble due to his maturity and his ability to relate to the older inmates.

“My first introduction into pimping was when I was 16,” Ken revealed. “So when I got out the little reformatory school, a dude named Star Child came to me. He said, ‘Listen man, you got a lot of flavor.’ He said, ‘I want you to ride with me.’ So I would ride with him everyday. Then one of my partners that I used to jump counters with and steal jewelry with, him and I… and he end up getting his first prostitute.”

He continued, “So when got his first prostitute, he got three prostitutes. So, I go to his house one day, and I say, ‘How you get all those girls? Man, what’s up?’ I said, ‘Let me have one.’ He said, ‘Which one you want?’ I said I want the one light bright damn near white with coochie candy stripe…So I wanted the light skin chick. He said okay man, you can have her and that was the introduction to the game. The entertainer said that’s when he started his “management  career” while gesturing air quotations with his hands.

Ken said he was able to master the ins and outs of the pimping industry with the help of his friend Star Child to the point where he was able to take the women that were working for his friend.  However, Ken says he never expected to gain recognition and stardom through pimping.

“But you got to remember…My mentality was that of a hustler,” he explained. “My daddy was a player. He was a crapshooter, you know. He had a few girls, but he taught me how to shoot dice, you know, crooked dice, and all that stuff…it’s just stuff you when you ain’t got no dope or nothing like that around you—you learn immediate hustle.”

Ultimately Ken took his talents to the music industry and started surfacing on mixtapes with rappers and producers including the late Pimp C, E-40, 50 Cent, Jermaine Dupri and more. He later revealed that’s also how the world of pimpin’ and hip hop collided.

“I did two albums with Lil Jon. I did five albums with Pastor Troy. So that stuff y’all hear me talking on them albums, I was talking that as a kid,” he explained.

“I didn’t know I was kicking game until Lil Jon and all those guys started paying me to be on those albums. I thought I was  just being natural, you know. I didn’t know I had a million-dollar vocal cord. Since then, I’ve been on 40 million records sold total.”

Ken has seen much success since then, including winning several awards such as the “International Pimp of the Year” and at one point amassed over a dozen girls — an achievement Ken said is not owned by many.

Ken attributes his success to how he was able to view prostitution as more of a serious business venture. “Your hoes are your employees, you’re our manager,” he explained. “You either got management or damage there. In that game, you’re a manager, so you’re managing your product. You got to keep your books, make sure that they got everything that they need, the clothes and stuff like that. So, you got to be a good manager of money. So you don’t even notice that you’re conducting business, but you are conducting business. So I wrote the book 48 Laws of Game.”

He has used his skills to garner deals and royalties from books he’s written and has even obtained six figure deals for artists including Boosie and Ice-T through his Hip Hop Fraternity business venture. The entertainer believes his line of business is similar to that of the music industry especially.

“The record labels are pimps and they’re banks. They’re basically giving you a loan, you know what I’m saying? They rob you, the reason why I know this because I’m in the game. I know gang — game recognize game. So I understand when they run the game,” Ken explained.

However, not every upcoming artist is well equipped like Ken, and oftentimes are left with no choice but take the bad contract deal. To that Ken said, “I’m 100 proponent of independence. I believe in autonomy, so it’s hard for me to tell somebody to sell their soul. But, if they in a messed up situation, you know, what one of the things they can do is what some of the brothers do at our facility.”

He added: “You can go get a job. You can work temporarily and you can just keep on whatever you do. Just don’t give up. Whatever the mind can believe and conceive, the mind could achieve. A winner never quit and a quitter never win. And you got to be humble because, if you ain’t humble, you’ll crumble. And don’t be an egomaniac. Your worst amigo is your ego.”