7 of the hottest bars from DDG’s “Off Top” freestyle

In this edition of “Off Top,” DDG tackles Migos’ “Straightenin,” a standout from their Culture III album. 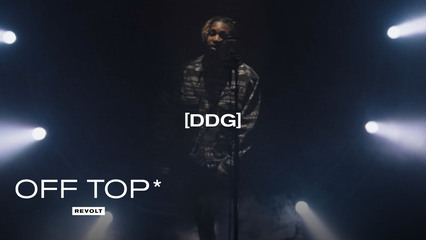 In this edition of “Off Top,” DDG tackles Migos’ “Straightenin,” a standout from their Culture III album. For his verse, the Michigan rapper lets loose quick-fire flexes, some wry humor and shots at anyone praying for his downfall. It’s an electric, appropriately fun rhyme session for an instrumental that begs to be rapped on.

The interview portion of the episode finds DDG speaking on his being selected to the 2021 XXL Freshman class, boxing with Toosii, his YouTuber background and a lot more. All in all, it’s a casual, yet revealing look at life for the ascendant rapper.

1. “Told her that I love her, I was faking it/Bought the Lambo gray, but I’m painting it”

DDG serves up some hilariously blunt playboy talk and a mandatory Lamborghini flex to kick things off in this “Straightenin” freestyle. If you didn’t think he leveled up this year, get it straight.

2. “Lamborghini outside, I was racing it/Freak—don’t moan she takin’ it”

Continuing the theme from his previous two bars, the Midwest rapper paints an image of life in the fast lane, one that sees him channel his inner Dom Toretto before racing home to a baddie. Flashy, yet plausible flexes like these color this freestyle in confidence and fun.

Having come up as a YouTuber, it’s only natural that a lot of people think of DDG as an internet personality before anything else. With some tongue-in-cheek humor, he plays with the idea that carefree web antics and rap exploits are just a ruse to make people think he’s slippin’.

4. “Mansion out in Calabasas, ‘Moonwalking’ went platinum/I ain’t walking in the club for free, If I’m walking in I got the back end”

In 2021, DDG is eating good, and his 2020 single “Moonwalking in Calabasas” is a big reason why. Since being released, it’s been certified platinum, and its success might just be a reason he was able to cop that mansion he speaks of here. Also, any time you see DDG in the club, just know he’s simply doing his job.

DDG gives a shout out to his hometown of Pontiac, Michigan and a friend locked up. These bars come in the midst of some serious flexing, but there’s never a wrong time to show love.

6. “Bro got the 30 on him like Stephen/…Millionaires into felons/I make one call and they stepping/That’s a first class trip to heaven”

The potency of DDG’s freestyle comes from its conviction and lyrics that can be specific to his own identity or evoke classic rap tropes with his own personal flair. Here, he lets loose a solid collection of decisive street bars that manage to ring off due to DDG’s emphatic phrasing and straightforward, yet punchy wordplay.

7. “[They] want smoke with me ’cause they see that I’m winning/Get you a ashtray ’cause it’s just the beginning”

As DDG says, with success comes a lot of smoke, and because of his own career trajectory, he thinks his opps will be smoking a lot. Based on the way he’s talking here, it seems like he’s got some strong lungs himself.