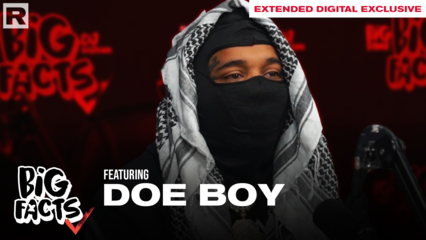 DJ Scream and Big Bank are back once again with another installment of the “Big Facts” podcast. This week, the crew sat down with Isam Mostafa, better known as Freebandz label signee Doe Boy.

In 2013, shortly after joining the Freebandz organization, looking at what could’ve been his initial breakthrough, the Ohio native was arrested on multiple counts of aggravated robbery. He subsequently served two years and eight months in jail. The rapper opened up the discussion reflecting on what it was like being sent away just as he began to make a name for himself in the music scene.

“It was so crazy because when the shit happen, when I caught my case, I was on Freebandz, but I didn’t sign no paperwork,” the rapper revealed. “That’s why after I caught my case, I was like, ‘Aye, I need some paperwork.’ We locked in, we already got that understanding, but I need that paperwork to make it real.” The artist admitted his own faults in not realizing the significance of being a part of a more prominent organization and the goals set to establish himself as a real artist. Doe Boy said his own carelessness toward the situation influenced his decision to engage in certain activities he was perhaps better off not partaking in.

“I ain’t really understand it yet. It’s like after I caught my case and I got out, he [sic] like, ‘Aye man! You need to bring ya ass on ‘cause you out here tripping and shit.’ So like when I start getting around that shit and seeing how shit go, I’m like, damn, this shit really fucked up because I know I’m gonna have to do some time and shit. No matter how in denial I was, I knew how my case was. Caught red-handed, realistically, you are not about to beat that shit.”

Still, Doe Boy says his rough patch, coupled with seeing the success of his friend Future, really put things into perspective for him as far as what type of artist — let alone what kind of person — he really wanted to be once he regained his freedom.

Now out, the rapper hopes to pick up where he left and even expressed desires to work with new artists. The “Shmurda Talk” emcee essentially called out Quality Control signee Lil Baby, stating, “It’s time.”

While discussing collaborations and speaking highly of the “We Paid” rapper, Doe Boy noted what he believed to be a growing trend in hip hop: Rappers seemingly creating industry alliances. “You can tell who really fucking with who and [which] niggas really rocking though,” the rapper said. “That shit hard, though, but that’s how it’s supposed to [be] because niggas really moving on some gang shit for real. Everybody click. All the right gangs is together.”

Doe Boy later touched on another growing trend: dick riding. The rapper attempted to explain exactly what that meant to him and how he felt about other rappers unauthentically supporting other artists.

“One thing, me personally, what I don’t like doing, I’m not never about to force no relationship or try so hard to just force a relationship with a nigga. You don’t fuck with me. I’m not fucking with you,” the rapper said. Seemingly struggling to pinpoint what the act entails, Doe Boy essentially summed it up as industry politics and artists going out of their way to be friends with one another while holding ulterior motives.

He believes several aspects of the music industry aren’t really what they appear to be including some of the topics that certain rappers talk about in their lyrics — especially when it comes to the subject of haters or feuds.

Doe Boy says rappers aren’t living their lyrics. “Most of these rappers, don’t even have opps. They can’t tell you one nigga they really got smoke with. Rappers just be rapping. That shit is just cute to them to say ‘I got opps.’ I be like, bruh, you want to take my opps? I don’t’ even want mine.”