On this new episode “Big Facts” with DJ Scream and Big Bank, the crew sat down wit Unfoonk and Yak Gotti of YSL Records. 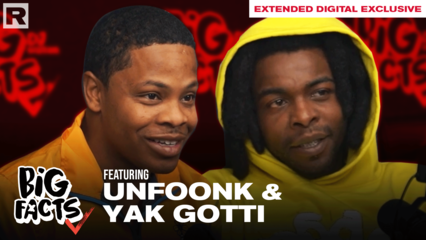 On this week’s installment of the “Big Facts” podcast, DJ Scream and Big Bank sat down with rappers Unfoonk and Yak Gotti. The Atlanta stars discussed new music, legal issues, and how they balance their time between work and family.

Being label-mates on Young Thug’s YSL Record, they shared their experiences running into some severe legal troubles that threatened to end their careers before they even really jumped off.

While much is unknown about Unfoonk’s past that initially landed him in prison, the Atlanta rapper has revealed in interviews that he was originally set to do a life sentence. But, thanks to the efforts from his brother Thugger and a record of good behavior, his time was reduced to 11 years. Meanwhile, Yak’s success was briefly interrupted after the “All Day” rapper faced murder charges following an incident in which a man who previously shot at his mother wound up dead.

Reflecting on his time in jail, Unfoonk detailed what his thought process was like facing a life sentence — knowing there’s a possibility he may never be free again. “I had to adapt to my surroundings… I only did like a year and a half in the hole,” the rapper explained. “You just gotta adapt to it until ya time come. See, I was just patient. I was just reading every day. After I got that call from Slime, I was just like, ‘Sit back. They say they got you a lawyer, now nigga sit back.’ I’m like say no more, and I just got to reading books. And try and learn more and just focus on getting out.”

While he says he doesn’t essentially regret what happened, Unfoonk understands the severity of his past actions. He later admitted that he always wanted to be a rapper. However, after having welcoming a baby girl, the artist needed a way of obtaining income to support his family and ultimately turned to street life.

Further elaborating on the topic of family and with their recent success, the guys reveal how they maintain a work-life balance. “See my baby momma tripping she don’t get it, I’m [on] a mission… I’m tryna get these M’s man, hold on, I gotchu though,” Yak quipped, alluding to the fact that his family should understand that he has goals he wants to achieve. But, when it comes to Unfoonk, the “Mob Ties” emcee said that family is his number one priority, specifically when it involves his daughter. “She call me like, ‘Where you at? I wanna come see you,” the rapper explained. “Yes, bring her to me. I just had my lil baby the other day. Bring her to me.”

When it comes to the music industry, Unfoonk and Yak say there are things they’ve witnessed already that don’t sit well with them including “dick riding” and the amount of false encouragement that goes around. In addition, Unfoonk feels that too many people in the business big up artists they truly know aren’t as talented as they make themselves out to be. Meanwhile, Yak believes the music game lacks authenticity and this it is all about politics, and often folks are quick to pick sides in a feud without having adequate information on the matter.

Casanova gets punished for doing a TikTok challenge in jail