“You gotta go in there and fake smile with somebody in the motherfucker,” said the “Revenge” emcee. “They not just going to let you in the door.” 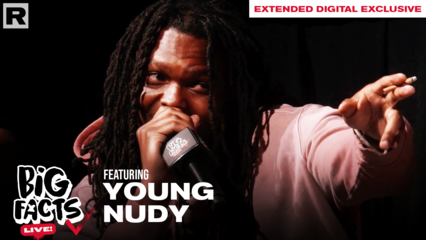 Big Bank and DJ Scream are outside with a brand new live episode of the “Big Facts” podcast with Young Nudy. The East Atlanta rapper came through to discuss new music, networking in the industry, and much more.

When asked if he’s been more open to collaborating with other artists who aren’t essentially his friends, Nudy admitted that it’s been quite tricky — alluding to challenges “getting near” them.

He strongly believes in order to progress in the music industry, he’ll have to step out of his comfort zone and “fake it” in order to network. “You gotta go in there and fake smile with somebody in the motherfucker,” said the “Revenge” emcee. “They not just going to let you in the door.” The rapper goes on to say that folks are too invested in artists’ day-to-day lives. Posting content for clickbait or to garner attention is not something he’s willing to do either.

Next up, Nudy talked about what’s it’s like visiting his old neighborhood after achieving career success knowing that there’s a possibility that some people may hold some animosity toward him because of it. “I was that before that rap shit. I ain’t going,” the rapper explained, suggesting that he’ll never forget where he came from before the glitz and glamour. “So, I could pull up to my hood and shit, ya feel me?”

Nudy also feels that when other artists attempt to return to their hometown, the visit is disingenuous. “A lot of folks can’t do that type of shit. And when they do do it, they be on cameras and shit. Like majority of the folks (audience members) that’s out here, they from the neighborhood. They know, they be seeing me and shit, on some regular shit,” he explained.

Later on, audience members got a chance to ask the star some questions, including what artists he’s looking forward to working with. Again, he maintained it’s been a challenge to work with many.

“They will tell me they fuck with me doe, but you know how that shit go,” he explained. “But, shit, I don’t know. I don’t really be, like, having nobody where I be like, ‘Oh yeah, I’m excited to work with this person.’ If you gon’ do it, you gon’ do it. If you don’t, I don’t get a fuck. Imma finished that shit anyways… So I don’t know.” Nudy added that he doesn’t hold any malice for artists who don’t want to work with him, but he jokingly stated that they couldn’t visit his neighborhood.

Another fan highlighted Nudy’s ear for good beats. When asked if he would ever consider becoming a producer, the “Roughneck” rapper said he’s attempted it but sadly faced some issues. “I tried that shit. I can’t do it. My hand won’t work,” he quipped. “But, I done helped produce [some tracks]. I’ll say make this sound like that, but me tryna make it. Naw, I can’t.”

The rapper said once he masters the equipment, there are several producers he’ll no longer be needing the services of. “I know what I like, but I like to let other people make money and shit,” he added.