Tokyo Vanity recalled a time even getting into an altercation with a fan who walked up and kissed her nephew on the face after having recognized him from several of Tokyo’s online videos. 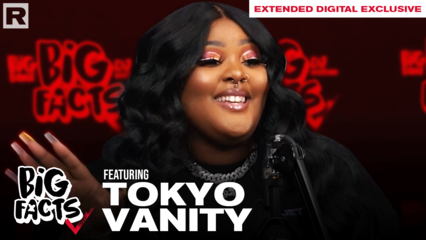 On this episode of the “Big Facts” podcast, DJ Scream and Big Bank sat down with the multifaceted Tokyo Vanity. The New Orleans native stop by to discuss all things, including her viral song “That’s My Best Friend,” adjusting to social media fame, polygamy, and more.

The internet star already made a name for herself on social media well before her “accidental” record went viral, thus catapulting her to new heights. And while her online presences has since offered new opportunities, including a spot on the VH1 reality television series “Love and Hip Hop: Atlanta” and the ability to uplift women with her brand of overall positivity, there are particular aspects of social media that Tokyo feels are just unacceptable.

“What I don’t like is there [is] just be too many fucking opinions,” the rapper explained. “Because you’re present and could be seen, it makes people feel like they know you more than they actually do because don’t nobody really know anything about me personal for real.”

Tokyo says it’s not just the trolls either. “People just walk up to you, and they think they know you, especially like once I got on TV. I became everybody cousin, so people really feel comfortable like walking up to you and touching you and, you know, shit like that,” she added.

The reality star recalled one time even getting into an altercation with a fan who walked up and kissed her nephew on the face after having recognized him from several of Tokyo’s online videos. The encounter took her by surprise, so much so that her first instinct was to mush the person away from her nephew.

Next up, Tokyo discussed her viral song “That’s My Best Friend” and how it came about randomly while she and a friend were getting ready to head out to an event the influencer was scheduled to host. Tokyo explained that her bestie was dancing to Lil Ronny’s single “Circle” when she came up with the catchy lyrics. “It blew up on Twitter, then Dub Smash, then Instagram, then Vine, and then I made it into a song,” she said.

Since the song’s release, several records similar to that of Tokyo’s have been created, most of which the rapper says she gets a percentage of. “You can say, ‘Go best friend, that’s my best friend’ in French, and we’ll be hollering at you,” she said.

Tokyo later shared her thoughts on people in relationships who also have extended relationships on the side. The reality star made her stance clear that she was against having and or being a side partner regardless if those involved are OK with the situation. “I just feel like, too often, men be trying to pull women in poly relationships instead of finding a woman that’s poly…” she explained. “Like literally, anything in life you want, [there’s] somebody who compare with you. If you like to only fuck at nighttime in a field of lizards, it’s a bitch that like to do that, too. Go find her. It’s not me.”

Tokyo believes most folks don’t understand the origins and core values of a polygamous relationship, and only end up in one after two women have been bickering over the same person for years—both parties ultimately decide just to share their romantic partner.

The conversation got a bit serious when Tokyo revealed her struggles with depression, stating that the most challenging part about it is not knowing that you’re actually depressed. “You don’t be understanding why the fuck you got everything in the world, you could buy anything you want, go anywhere you want, and you don’t have to wake up and punch nobody clock. Can’t nobody really tell you what to do, you the boss, but you just still unhappy. You don’t really realize that it’s from within,” she explained. “That’s why you’re not happy. None of this stuff could ever furnish your happiness for real because you’re unhappy within—it’s not an external thing. So transactional shit and material shit can’t make you happy.”

The reality star recalled one of her low moments in life, which ultimately caused her to stay in a mental health facility for two weeks while working through her problems. She explained some of the many exercises she did that helped her through that period, including writing down things that made her happy and sad. Over time, the positive ongoings in her life outweighed the negative.

Be sure to stay tuned every week for new episodes of “Big Facts.” Also, don’t forget to watch the latest show above!