Kinky B opens up about Jeezy fallout: “It was just a lot of f**ked up s**t”

“Everybody knows Jeezy ain’t s**t, but they deal with him accordingly,” Kinky B said on “Big Facts.” 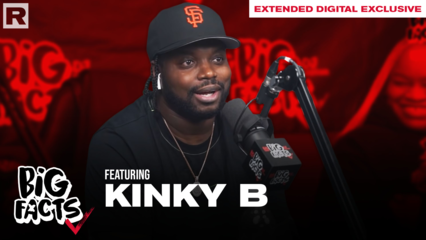 Big Bank and DJ Scream return for another episode of “Big Facts” with businessman and Corporate Thugz Entertainment co-founder Demetrius Ellerbee aka Kinky B. The conversation took off about Kinky’s background, the birth of his label, and a deep dive into his former partnership with rapper Jeezy.

At a young age, while doing a bid in a juvenile boot camp, Kinky says he met Jeezy, and they instantly connected. However, the idea of creating a record label together didn’t come up until later on and only after the pair made money separately from other ventures.

Left unsatisfied with the rap music he heard on the radio, Kinky decided that it was time to get serious about venturing into the music business. “If these n**gas can do this s**t, then we can do this s**t,” he expressed.

“We had a little studio over on the east side of Macon [Georgia], went and got it, rent[ed] it, bought all the studio equipment. Paid somebody to come hook up this s**t, and we went to work. The first project we put out was called Young Guns, and it was my partner from my neighborhood Kojak Kid, Lil Mirror. We put that out. It was cool, we pressed about 20,000 CDs — sold like probably half of them, gave some stuff away, and we just kept pushing.”

With business doing well and a Grammy nomination underneath their belt, Kinky felt as though his team “had arrived,” however, it wouldn’t last. The entrepreneur said there was a shift in how the pair handled business, and their bond was subsequently affected.

“It was just a lot of f**ked up s**t,” he said. “How we go from doing what we did on this side, and we get over here — this s**t ain’t even real (the music business).” Kinky seemingly attributed his falling out with Jeezy to some things the rapper may have said on his latest project and allegations that Kinky may have stolen money from him.

“I’m like, bro, how could I steal some money? All your money go straight to the accountant, and every Monday, they cut me a check for my twenty percent,” Kinky explained. “It was just a lot of bullshit that he would put into the mix that I didn’t like. I wanted to say something. But, I’m like, you know what? I don’t got to do that.”

Still, Kinky said his relationship with Jeezy only got worse from there, and the two men who had been friends their youth were now facing off in court over money and a business they built together. The label owner admitted he was unprepared for a time when his abundant stream of income would cease. And with the ongoing court case depleting his funds, Kinky filed for bankruptcy in a last-ditch effort to save his assets. He ultimately lost to the rapper in court by technical default.

“I filed bankruptcy to stop the bleeding, but when you file bankruptcy, you relinquish any of your rights in any business that you have because you gotta [put] everything to the table,” he explained. “I didn’t learn this shit ‘til afterward.” Still, Kinky maintains that he doesn’t owe his former friend any money and doesn’t know why Jeezy “switched up” on him.

Kinky expressed his only regret was putting his friendship over his business, something he felt Jeezy didn’t practice. “Lesson learned, but it would never happen again,” he said. “We men, we keep pushing. Everybody still cool, but everybody cool in their own way. Everybody knows Jeezy ain’t shit, but they deal with him accordingly.” Nonetheless, Kinky is seemingly still open to the idea of reconciling their differences… one day.

Speaking on squashed beef, he gave his perspective on the Verzuz battle no one ever thought would happen between Jeezy and Gucci Mane. The self-proclaimed “street n**ga” described the event as one of “the most disrespectful s**t” he had ever witnessed.

The businessman expressed disbelief that Jeezy accepted the offer considering his beef with Gucci led to the demise of their associate Henry “Pookie Loc” Clark, who was shot by Gucci in 2005. He also revealed Jeezy lost respect from his peers as a result.

“That man, [Jeezy] in the United States of America, any street n**ga lost all respect for that man that f**king day,” Kinky revealed. “He lost all his street credibility that day due to the fact that I don’t give a f**k, when a n**ga lose their life, man, ain’t no peacing up. They’ll never be peace. Never, ever.”

Surprisingly, Kinky applauded Gucci’s conduct that night. As many can remember, the “So Icy” emcee’s behavior was initially far from sportsmen-like. He even performed “The Truth,” his infamous Jeezy diss record in which he referenced the killing. Kinky said he didn’t watch the event. “That cool s**t Jeezy was playing.. he got played, real bad,” Kinky added.