“For a name change at this point in my career, that’s a big step. Shit!” Mulatto said on “Big Facts.” 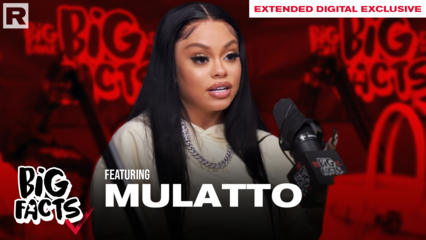 “Big Facts” with Big Bank and DJ Scream returned with another sizzling episode with former “The Rap Game” winner Mulatto!

Scream started the convo by asking the Georgia rapper what she would do if she found her lover in bed with another person. “Oh, you gon’ die, you gon’ die,” she expressed without hesitation. “Everybody gone. They going up there.”

The crew’s light banter led smoothly into the next question that has been on everyone’s mind ever since the emcee dropped a few tweets hinting that she was officially off the market.

While Latto didn’t drop any names per se, she did divulge what type of men catch her attention. “You know? I’m not really into physical, so it ain’t really like look like [that]. It’s more act like, think like, move like, you feel me?” the rapper explained.

She continued, “I ain’t gone lie, you can’t be soft as fuck. You can’t be soft ‘cause I’m slick, an alpha myself, so like a soft nigga, I’m a run right over you. Don’t put your hands on me ‘cause you know the internet gonna take the shit and twist it or whatever. I ain’t’ saying put your hands on me, but I’m just saying don’t let me run all over you. You know what I’m saying? A boss nigga cause I’m a boss bitch.”

Big Bank tried his best to get a little more intel and even name-dropped rapper Key Glock, but Mulatto wasn’t falling for it. The 22-year-old noted that since her life was so public, she’s keeping certain things private. She did reveal that her mystery man was in the industry and that he wasn’t from Atlanta, so do with that info as you please.

Things then got a little more serious when her name came up. Along with a growing fanbase, Mulatto has caught an increasing amount of flack for her stage name — a term considered offensive to those of mixed-race backgrounds. Born Alyssa Michelle Stephens, the emcee previously stated that her stage name was a part of her identity as she identifies as biracial. She also admitted that she was not privy to the name’s racist roots. Mulatto’s mother is white, while her father is Black.

The “On God” rapper cites “misinterpretation, miscommunication, and just not understanding me and my intentions” as a cause for the backlash. “They take ‘Mulatto’ as me thinking that’s like a personality trait. I walk up and be like ‘I’m mixed,’” she explained.

“Before I even brush my teeth, I be like, ‘Bitch, I’m mixed.’ And they take [it] as that, and that’s not what that means. So, right now, I’m in the process right now — if your intentions are not being interpreted after like that, that means go back to the drawing board.”

Although she admitted that she wasn’t fazed by her critics, she did note that it would be “careless” of her not to be open to a discussion. “Like I said, how they’re interpreting it is not my intention,” she maintained.

Mulatto revealed that after much push back, she is firmly considering changing her stage name and that she already has one prepared and with a launch date. She did, however, alert audiences that the transition would not come quickly. “For a name change at this point in my career, that’s a big step. Shit! Where at the same time, I gotta listen to them, they gotta listen to me, like, ‘Damn, that is a big step.’ You got labels involved, investors, management, PR. There’s so much shit that goes into it. It’s even a big step for me to consider doing.”

The “Thot Box” rapper says she knows even with the name change Mulatto will always stick to her, but she’s making a conscious effort to rectify the situation. Still, her stardom continues to climb. It is not an easy feat for many, but she’s managed to keep a busy schedule during an unprecedented pandemic — even to some’s dismay.

“We were building the whole roll-out plan, or whatever, and we announced it in March. And boom, pandemic hit in April. We was planning this whole roll-out for three months, and we had to go back to the drawing tables,” the star explained. “We got creative as fuck. I’m one of the ones that popped off in 2020. Shout out to my team ‘cause they got creative ‘cause at first, I was discouraged than a motherfucker, I’m like bruh, ‘I just sign[ed] to my first major record deal.’ I felt like everything was fuck[ed] up, but they was like, ‘Naw, we gon’ this, we gon’ do this…we gone this…”

Say what you want, but Mulatto is about her business and a true hustler, which is why she calls herself “Queen of da Souf.”

REVOLT sat down with Big Boss Vette during Black Music Month to discuss her music, influences, ...
By Shea Peters
/  06.23.2022
Watch

In honor of Black Music Month, REVOLT has teamed up with Xfinity and Grammy award-winning ...
By REVOLT
/  06.20.2022
View More