9 top moments of the 2021 REVOLT Summit in Atlanta, Georgia

Couldn’t make it out to the ATL? No worries! We’ve got you with a recap. Here are nine of the top moments from the 2021 REVOLT Summit x AT&T held in Atlanta, Georgia.

The REVOLT Summit x AT&T made its highly anticipated in-person return this year to the city of Atlanta for the first time since COVID-19 struck America — and the world for that matter. With a hefty lineup that included acts such as Meek Mill, Offset, Allen Iverson, Cari Champion, Angela Yee, and 2 Chainz to name a few, attendees were given the opportunity to learn from established entertainment professionals, and network with hundreds of other attendees with similar goals and aspirations.

Couldn’t make it out to the ATL? No worries! We’ve got you with a recap. Here are nine of the top moments from 2021’s REVOLT Summit x AT&T held in Atlanta, Georgia. 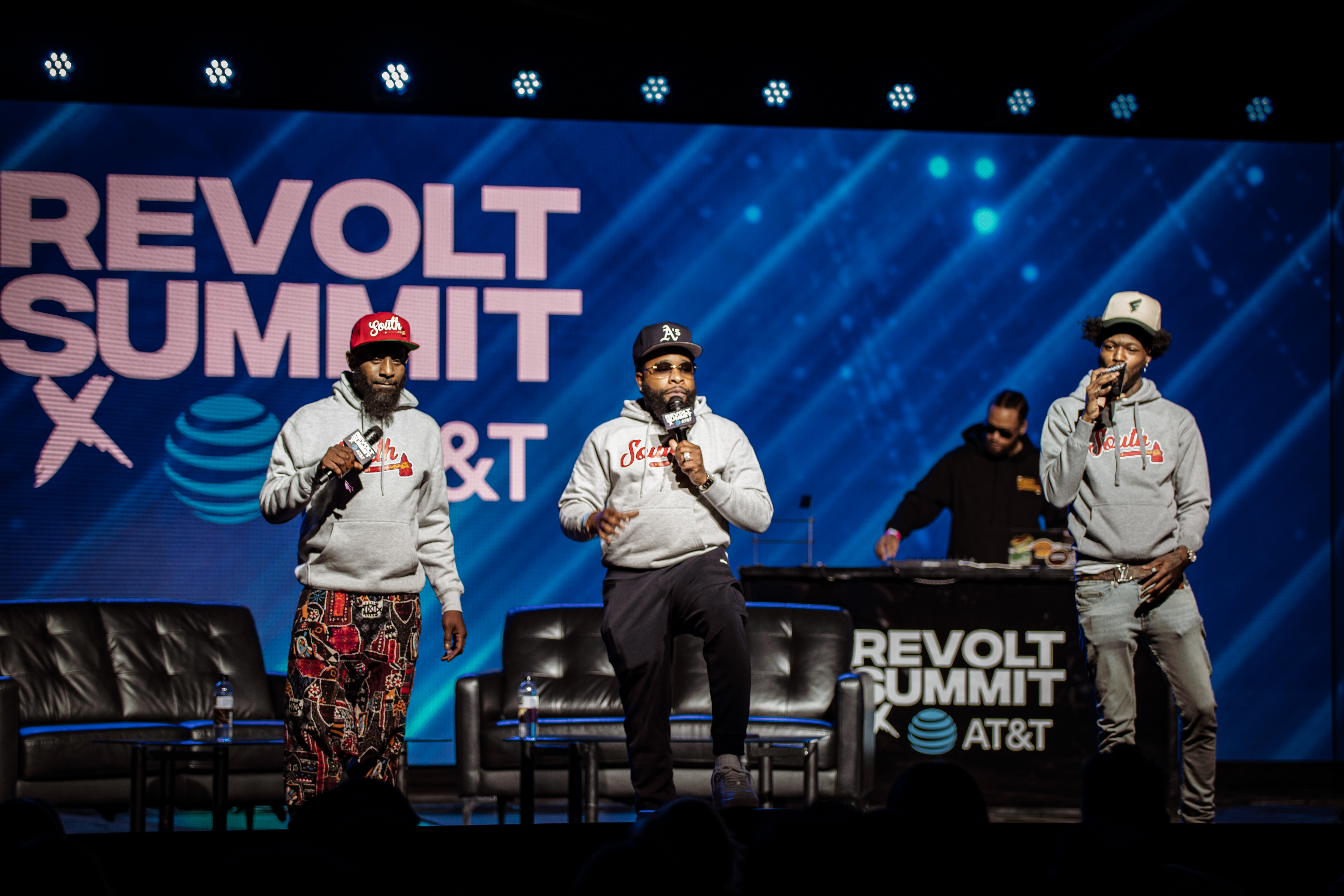 The Summit kicked off its first panel with two executives who are absolutely killing the game right now. Cecil White, a highly sought-after sports agent whose client list includes athletes such as Josh Christopher and Deja Kelly, spoke alongside Julian Mitchell, a Combs Enterprises executive and talented journalist in his own right. The duo brought knowledge from their life and career experiences, and dropped gems on the attendees on a multitude of topics.

Equity was the primary topic of conversation and they both had so much to say. Mitchell spoke a bit on the importance of expansion before equity. “The box doesn’t really exist. The only box that really exists is the box you build and create,” he said. He went on to say, “It’s important to own our culture, own our influence.” Owning our influence is so much deeper than capitalizing off of your Instagram page, owning your influence is realizing that everyone has influence, it’s what you wear, what you do, and how you do what you do.

They also spoke on their come-up and gave a piece of advice to the attendees. Mitchell said “You get paid for your value, not your time” while White advised the audience to “Always have an idea for someone.”

Later that night, the comedy trio 85 South consisting of DC Youngfly, Chico Bean, and Karlous Miller took the stage to humor the audience with their set. They began by cracking jokes with the crowd and getting to know everyone before transitioning into an audience-led karaoke session. There must’ve been about 15 different audience members they gave the mic to. While some had the vocals, some surely didn’t, but nonetheless 85 South made sure everyone in attendance had fun.

To close off the first night of the Summit, Jeezy welcomed everyone in attendance to his hometown and then brought out Atlanta Mayor Keisha Lance Bottoms. Ms. Bottoms spoke a quick piece about the love she has for her city and warmly welcomed the audience to Atlanta. Lil Yachty then came out for a quick performance that hyped the audience up. City Girls followed up with another set that further amped up the audience before sending everyone home for the night. REVOLT’s Welcome To Atlanta definitely kicked the Summit off on a high note. 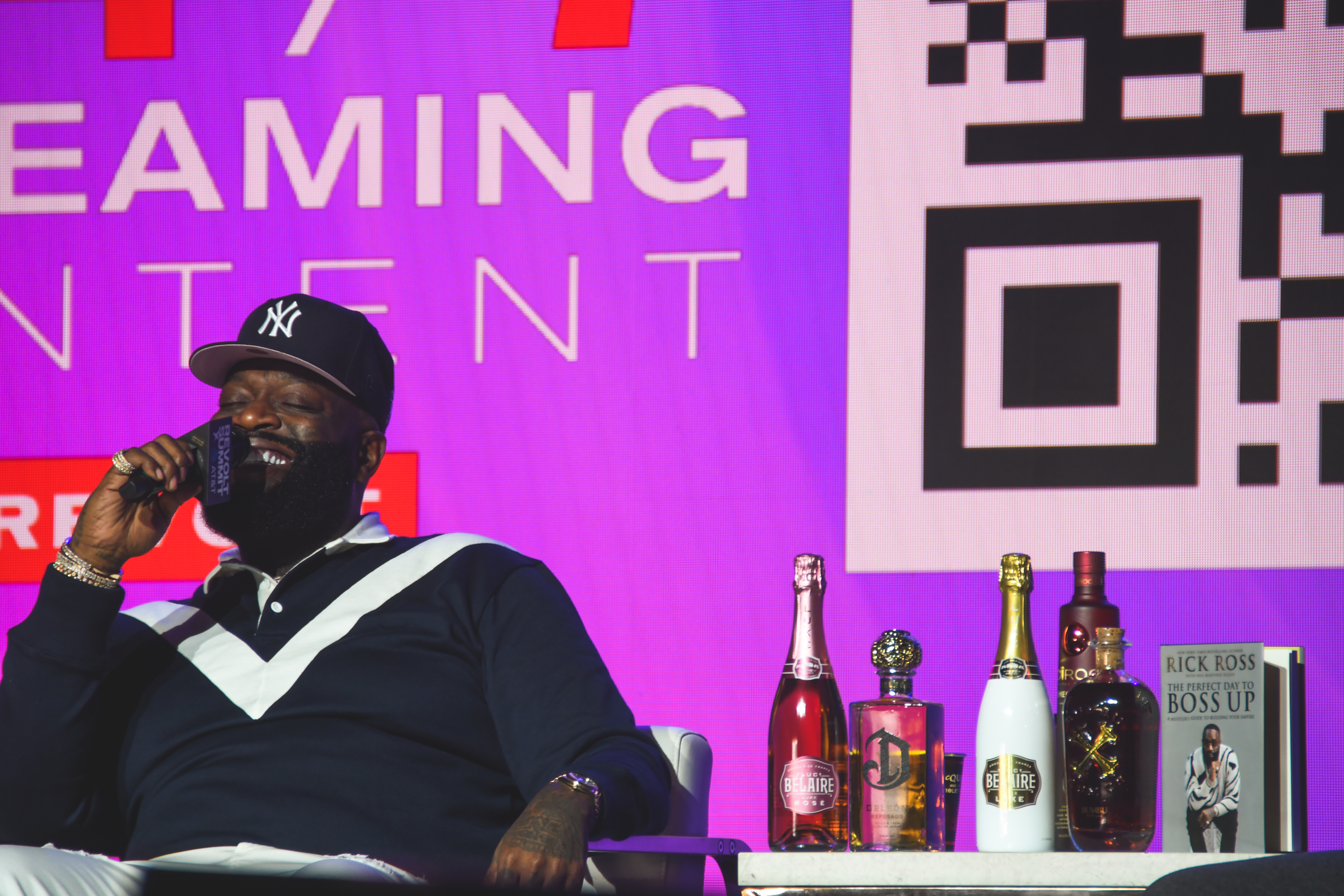 One of the best panels from the Summit came from Cari Champion, Joey Bada$$, and Detavio Samuels. The trio had a chat about owning everything beyond the content we create. The three of them had such incredible chemistry on stage and engaged the audience at the end with a Q&A session.

The word ownership inflicts a heavy feeling of power upon its user. When Champion, Samuels, and Bada$$ spoke about the importance of owning our narrative, it was all about putting the power back in our hands. The rapper offered his two cents by telling the audience, “Take ownership of whatever career path you choose to embark on” and Champion summed up their conversation quite beautifully when she said, “You need to own every single thing so that no one can tell you ‘I’m your master.’” After all, if we created it, why shouldn’t we own it?

The next highlight of day two came from an intimate 1-on-1 panel with Taylor Rooks and Allen Iverson. They discussed all aspects of Iverson’s career from the ups to the downs, his mental health, advice he has for current NBA players, and so much more.

The conversation was both emotional and hilarious. Iverson told stories about his first and last time smoking marijuana, the NBA players that inspired him, and finally broke down his iconic practice post-game interview. Iverson and Rooks effortlessly bounced off of one another and made the audience feel comfortable and at home. Their conversation was one of the few that could bring the audience from tears of happiness to tears of sadness in a matter of minutes.

At the end of their panel, a fan who’d been calling Iverson a legend multiple times throughout the panel made a comment about the shoes the former baller was wearing just as he was about to leave the stage. Iverson immediately took notice of the fan, took the shoes off his feet and gave them to the fan, and then walked shoeless off stage. This moment was proof that the star really practices what he preaches.

During day one of the summit, auditions were being held for any artists to come through and compete for an opportunity to be one of the six artists selected to perform in front of a judge panel consisting of Big Tigger, Rapsody, Chaka Zulu, and Cortez Bryant. Oh, and for a chance to win $10,000!

The six artists given the opportunity to perform during day two of the event were Carlito, Drain, Karnease, LATheGoat, Miss Primrose, and Nia Simone. Out of those six artists, there were three that were crowd favorites and one that just absolutely blew everyone away. 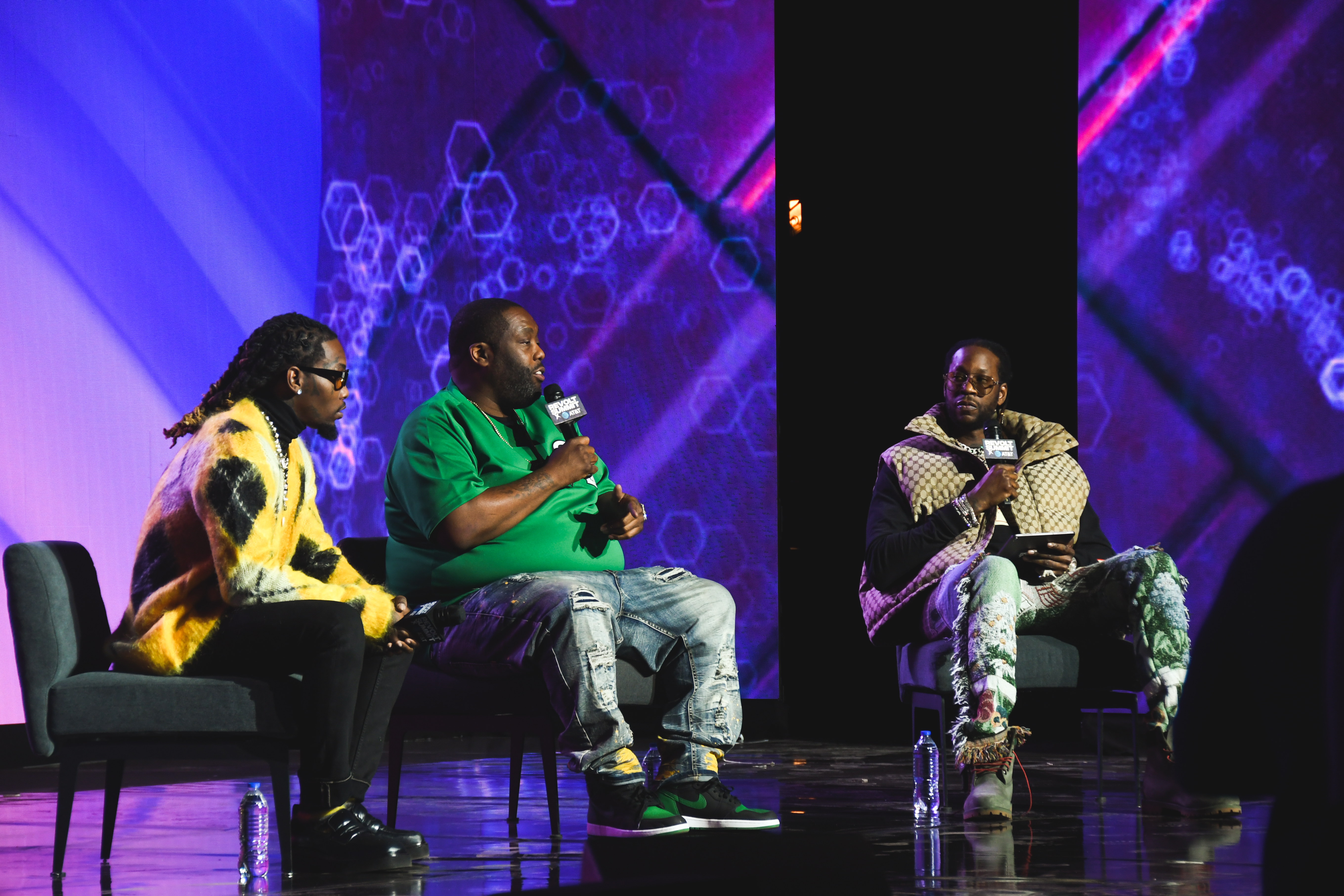 Miss Primrose was a singer/rapper who came out to perform her song “I’m Grown.” What was special about her act was the way she kept the audience engaged in her performance. She brought out two dancers that she did full choreography with, and threw roses in the air as she sang. While she wasn’t a favorite with the judges, the audience was highly engaged in her performance and seemed to thoroughly enjoy it.

When Houston-native Drain took stage to rap his song “Show Me Sumn,” the audience immediately caught his energy. He had an amazing flow, precise breath control, and kept the audience engaged with a catchy hook and by throwing money in the air. Drain had the most energy on stage. Although he didn’t win the competition, he’s definitely going places. Maybe to the bank to pull some more cash to throw.

The last performance of the competition came from Nia Simone, an R&B singer with a strong powerhouse voice. Although she was only 18, her voice sounded years ahead of the curve. She performed her song “Oh No, Not Me,” and it showcased just how powerful her vocal range was. The audience and the judges fell in love with her and when she ended up winning the competition, the CEO of the clothing brand God Is Dope doubled her prize money from $10,000 to $20,000.

On the final day of the REVOLT Summit, Brandon “Jinx” Jenkins moderated a panel about fashion in the entertainment industry with Bryon Javar, Edvin Thompson (Theophilio), and Tiffany Hasbourne. The three talked about their journey to where they are today, what the pandemic brought out of them, and what about the industry they feel like needs to change.

One important aspect of the conversation came from Hasbourne when she talked about the importance of putting younger stylists on. When she was offered big TV projects that her schedule didn’t allow her to fulfill, she always referred the producers to newer stylists she had faith in. While some may be scared to do this, she believes this is how we can dominate spaces where there aren’t enough Black stylists present.

For The Love Of The A

One of the most anticipated panels of the entire summit was “For The Love Of The A,” a panel led by 2 Chainz, and that included Killer Mike and Offset. The trio discussed why they love their city so much, and the plethora of ways Atlanta is dominating the entertainment industry. Mike spoke a bit on the monopoly Atlanta has on the rap scene. “If you listen to anything on the radio, it all sounds like 2 Chainz and Migos,” he said. Offset piggybacked on what Mike had to say shortly after, “If you look at music, we’re running it.” Another big topic of conversation was the opportunity present in the city. “There’s a lot of money in the city...I know the owners of the clubs, they’re my homeboys,” Mike followed up by adding, “You’re the club owner, not just the club promoter...we have a grand opportunity in Atlanta...you can prosper here.” 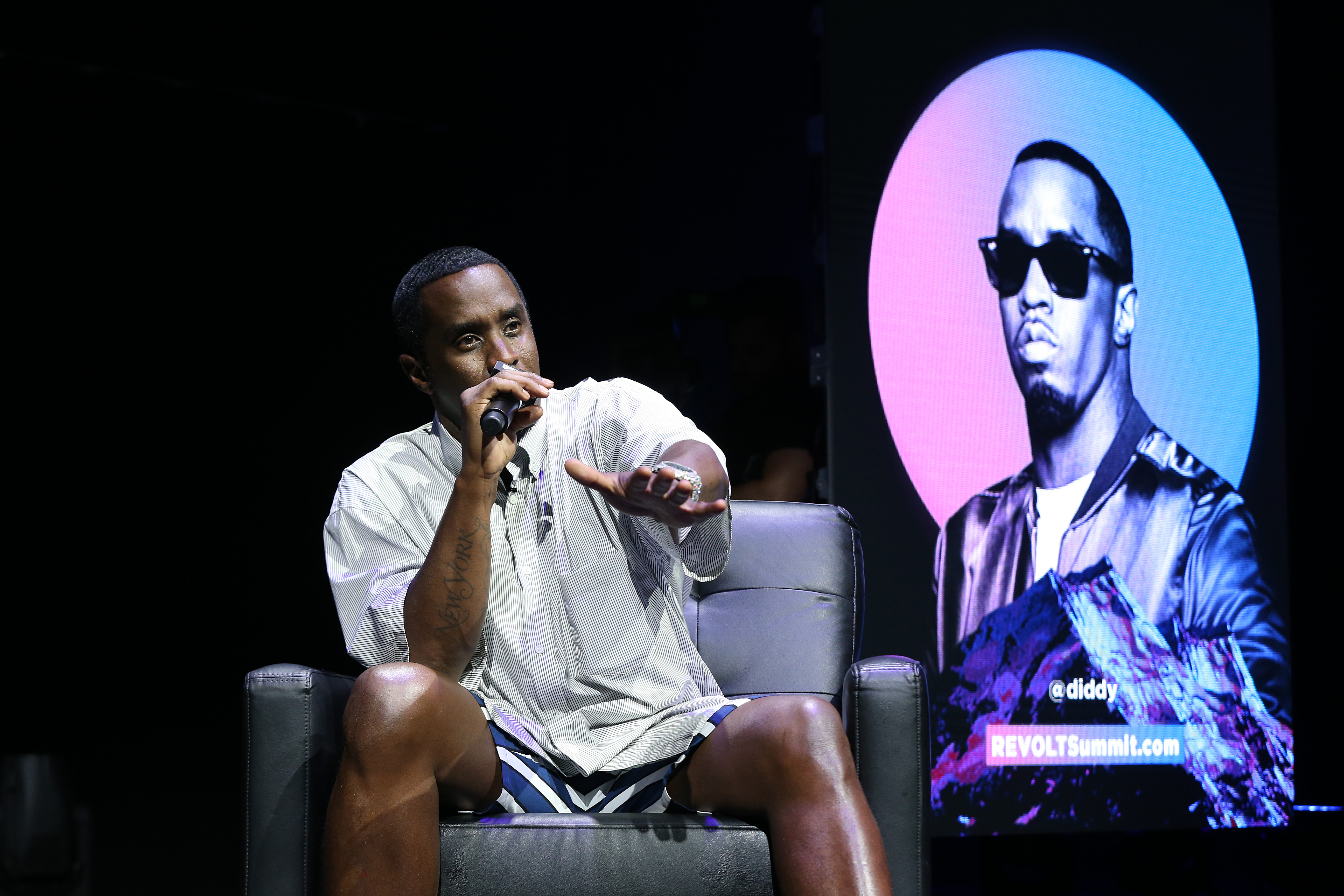 The Expensive Pain Pop Up

2021’s REVOLT Summit ended off with a surprise performance from Philly’s very own Meek Mill. Meek came out and opened up with his signature song “Dreams & Nightmares’’ before cutting into some of his newer music and then “Going Bad.” The attendees were SO pumped to see Meek and everyone got out of their seats and STAYED out of their seats for the entirety of his performance. His performance was the perfect closer to another amazing REVOLT Summit. See you next year!