Negus was previously presented at art shows in Hong Kong, New York and in Morocco.

It’s been nearly five years since Yasiin Bey announced his retirement from the music business through a freestyle via Kanye West’s website. The artist formerly known as Mos Def has popped up periodically with his most recent verse appearing on Navy Blue’s “Breathe” in December 2020.

In Dubai, The Arab News is reporting Bey has brought his immersive creative album to a popular art gallery. Negus is a 28-minute soundtrack for the audio-visual installation of the same name at The Third Line gallery. The eight-track offering was reportedly recorded in 2015. It is exclusive to the exhibit, therefore it cannot be streamed anywhere else. A strict policy prohibits guests from entering the installation with their phones. Lights are turned off and headphones are used to fully experience the art without distractions. In a 2017 interview with Hot 97, Bey explained why he left rap. “I don’t want to deal with that and bring that home to my family,” he said at the time. “Or bring that to myself. I don’t want my mom to inherit the fucking PTSD from running around in the rap game. The beefs, people can’t get along for longer than 20 minutes. Everybody getting big bags of money but ‘you ain’t that, you ain’t this.’ Routing each other out on Instagram. What kind of shit is this?” 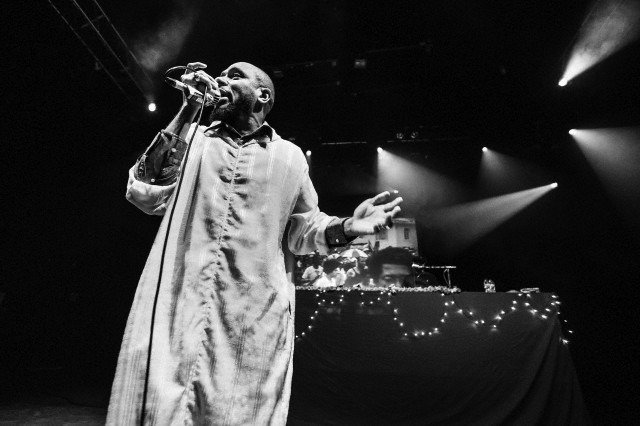 Negus has been previously presented at art shows in Hong Kong, New York and in Morocco. The eight-track offering is the first since Bey released his 2016 collaborative album December 99th with writer and record producer Ferrari Sheppard. Next month, Bey is supposedly reuniting with Talib Kweli and Dave Chappelle to co-host “The Midnight Miracle” on Apple’s podcast network.