The legendary sprinter brings forth some new jams

It is not every day where you see one of the greatest athletes of all time to dive into the music scene. More times than not, when they retire, we see those types of individuals enduring multiple business ventures and such, then stop there — but not in this case. Legendary sprinter Usain Bolt taps into his creative side, linking up with his manager Nugent “NJ” Walker to put together his first ever LP, Country Yutes, which also happens to be his debut studio album. With everything happening in the world today from the new strands of COVID to the tragedies that Hurricane Ida has bestowed upon multiple cities and states, it is somewhat a sigh of relief to some people to have this type of feel good music to turn to during these times.

Since he retired from track and field in 2017, Bolt’s business endeavors have exploded at a pace similar to his record-setting sprints and left him with an estimated worth of $90 million. He’s launched his own electric scooter rental company, co-founded a company that makes high-end razors, and inked a number of endorsement deals and contracts for everything from shoes to watches to beer. Bolt’s initial music endeavor was part of a 2019 publicity campaign for the first product from his association with G. H. Mumm, Olympe Rosé, a cognac-fermented champagne.

In regards to the music, he recently stated that he yearned to be the “DJ Khaled of Dancehall” and judging from this album, he is certainly headed into the right direction. 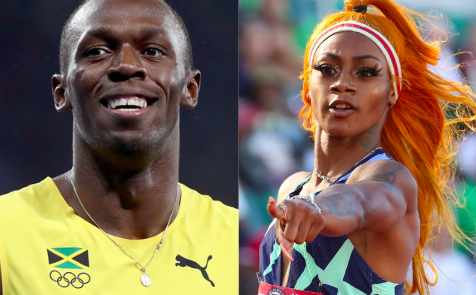 On another note, in an interview with REVOLT, the GOAT sprinter shared his thoughts about track and field runner Sha’Carri Richardson: “I like her energy because I think she’s good for the sport because her energy is different. It’s spicy, it’s a vibe” He continued to give her some words of encouragement: “You will have failures throughout your career, it’s just one of those things. In my first Olympics in Athens, I didn’t make it outside the first round. So, it’s just about being determined and pushing yourself, and just believing that you can do it, and just go and do your best.”

If you are reading this, make sure you tap in to Bolt’s Country Yutes album and catch a vibe for the fourth quarter of 2021.