“I had been working all those years and I was finally on TV,” the comedian recalled. 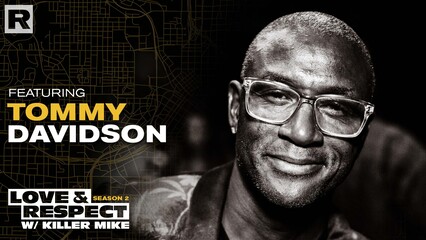 Tommy Davidson was years into his stand-up comedy career before he knew what impersonations were, despite the fact that he was famous for them. He says, “I did not know that they were even called impressions until I was a couple of years in to doing stand-up because I always imitated things.” In this week’s episode of “Love & Respect with Killer Mike,” the comedian reflects on his long career and the talent, people and opportunities that took him around the world.

Starting out in stand-up in the 1980s, Tommy Davidson’s high energy and unique ability to imitate well-known entertainers Al Jarreau, Rick James and Prince helped form the foundation for a career that has spanned almost 40 years across movies, television and comedy. Those who have heard Davidson’s sharp quips or watched any of his hilarious movies might be surprised to learn that his early life wasn’t so joyful. Abandoned at just 18 months old, the “In Living Color” alum was adopted by a white couple and would live in three different states before settling into the DMV. Although he was a part of an interracial adoption, the “Black Dynamite” actor did not understand race until his family landed in Washington, D.C. — smack dab in the middle of the 1968 riots sparked by the assassination of Dr. Martin Luther King, Jr. He says, “I never thought of [my parents] as white, I didn’t know what white was … what I knew was love, I knew friendship, honesty. I didn’t know anything about Black and white.” The realities of race hit Davidson in the face in his new home, and being Black grew to be a larger part of his identity.

Comedy was also a signature piece of his identity and even back in first grade, the D.C. native recalls his school principal referring to him as a “comedian.” But he was more than just a class clown — making people laugh came naturally. He says, “My talent is God-given and that gift has taken me so many places and … given me a chance to use my talents in different places.” That natural gift would catapult Davidson to superstardom. After winning an amateur stand-up show at the famous Apollo Theatre, the actor relocated to Los Angeles where he got his big break. Davidson even lived in the same building as fellow comedian Martin Lawrence and performed at Luther Vandross and Anita Baker shows.

In 1990, there were no majority-Black sketch comedy shows, so when the first family of Black comedy — the Wayans — debuted “In Living Color,” the world paid attention. The landmark show launched the careers of actors Jim Carrey, David Alan Grier, Jennifer Lopez, and Rosie Perez, along with Davidson. Appearing on a network television show was big time for any comedian, and the usually confident stage entertainer was shocked by his own success. Davidson shares, “[The] first time I got on camera, I froze because the reality hit me. I had been working all those years and I was finally on TV.” The show was a springboard for other opportunities like star roles in classic movies such as Woo and Booty Call, but stand-up is still where Davidson’s heart lies. He says, “I’m not dependent on anything. It’s me, you get my mind, my perspective, I get to take you on a ride, it’s an art form.”

When he’s not doing stand-up, you can find Davidson working alongside his wife Amanda at their apparel company, Ties that Bind, or providing businesswear to disenfranchised men going on job interviews. From the stage to the screen and beyond, Tommy Davidson remains true to himself and his talent and continues to make us laugh.

Summer Walker announces she is expecting her second child

Summer Walker announces she is expecting her second child