The “Shoulder Lean” rapper opened up about his journey to sobriety on an all-new episode of “Big Facts.” 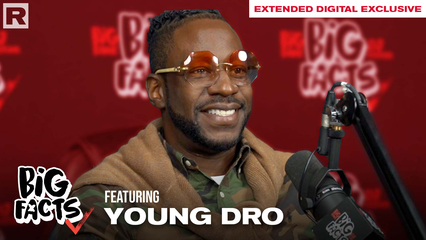 On this week’s episode of the “Big Facts” podcast, co-hosts Big Bank, DJ Scream and Baby Jade sat down with veteran rapper Young Dro. Since coming on to the rap scene in the early 2000s, the ATL trendsetter has released several studio projects and over 20 mixtapes. However, a battle with substance abuse threatened to ruin everything the “Strong” emcee worked for. Please keep reading to find out what the rapper had to say about overcoming his addiction, rebuilding himself as an artist, the artists he’s inspired by, and more.

Young Dro’s passion for music dates back to middle school. The rapper revealed he was in the same class as Kriss Kross’ Chris “Daddy Mac” Smith, recalling that the legendary emcee “used to sit right in front of me” and that he also did “the backward thing” that was popularized by the hip hop duo with his jeans. “I was already introduced to music through my grandmama in the choir and stuff like that … in the church,” Dro shared.

“It started in church singing with my grandmama and she was like, ‘Baby, if you sang, I’ma get you a gold [tooth] cap.’ So I got one gold cap. Then I sang another song — got another one. And by the time that I had got through singing, I had a mouth full of them. Then I was like, ‘I want a permanent one now.’ Then, you know, it went on from there,” he explained.

Young Dro is perhaps one of the few rappers with the ability to remain relevant without consistently releasing music. Still, it’s been a while since fans have gotten bars from the Atlanta native. During the interview, the “Shoulder Lean” rapper gave a little insight in to his seemingly frequent breaks from the spotlight.

The “Ain’t I” emcee revealed that he was introduced to drugs by a peer, noting, “When we’re introduced to these drugs, we don’t have an idea that it could really spazz out.” He went on to admit that one night of fun soon turned into an ongoing habit for him.

“And once it becomes a habit, you get to feeding that monster, and it gets bigger, and that talent becomes secondary because you’re mostly into drugs at that point,” he continued. Dro admitted, “I indulged but by the grace of God, I was able to make it through and keep myself up.” He wasn’t so lucky with his career, however. When it came to “the business part,” the rapper said, “it kinda went left.” “Sometimes I be available, sometimes I won’t,” he added. “When it most counted, I wasn’t available.”

Dro explained that addiction runs in his family, noting that his father and several of his siblings have all battled some form of substance abuse and, in some cases, succumbed to the disease.

For him, the push to get clean came after his 19-year-old daughter started using. Although he didn’t go into too much detail, he said he offered to go to rehab with his child but to no avail. The remorseful father said he checked into rehab roughly one year ago and has been clean ever since.

When it comes to creating music now that he’s sober, the rapper asserted, “It’s still the same kind of music; it just takes a minute.” He added, “It’s actually a better trip. The journey is better. The studio times are more cleaner. My girl don’t got to worry about crazy stuff like getting those calls like, ‘Dro up here spazzing, you know. He smoking all in the studio, and he just bringing all these people in here.’ It’s a better feeling now.”

Dro believes he was lucky to have been offered endless opportunities from his team and record labels (including Atlantic Records and eOne) to get his act right. “They was giving me a lot of chances,” the ATL native admitted. “And the talent kind of prevailed through, but the person wasn’t good. That’s why when you heard those hits and I would disappear, they would give me the benefit of the doubt of putting it out and giving me advances and stuff like that. I would make good money, but I wouldn’t be focused in order to maintain the stardom I was receiving.”

When asked what advice he would offer young artists who are facing a similar situation and heading down that path, Dro suggested “therapy, somebody to talk to, an outlet.” Specifically speaking to Black men, the “FDB” emcee said the idea that you can resolve your problem with a drink or two is “totally a lie.” He continued, “It’s some stuff that needs to be brought out of you that you need to be aware of.”

“Whatever you going through, find somebody to talk to because just us sitting here talking — this is therapy for me,” he added.

Young Dro’s influence on the futuristic sound hip hop leaned into for a significant portion of the 2000s is undeniable. However, he doesn’t believe he’s received the recognition he deserves for helping usher in that new sound.

“People don’t give Jesus the credit for what he do. Who am I?” Dro quipped, seemingly unbothered by not receiving his flowers. Still, he harbors no hard feelings towards music fans. “I roll with the punches. I know in my head and my heart what I’ve contributed to the culture, and I know what the culture contributed to me. And once you’re good with that, you’re just good with that.” Still, there are a few artists the musical trailblazer believes are carrying the sound he created, including fellow Atlanta natives Lil Baby, Future and Young Thug.

In 2019, the star, whose real name is D’Juan Montrel Hart, was sentenced to 12 months behind bars after allegedly throwing a plate of banana pudding at his girlfriend during a heated argument at their Atlanta-area home.

Dro opened up about what led to that incident, claiming he and the mother of his children got into a disagreement that they initially left alone for fear of their kids hearing. However, intense feelings prevailed and their argument was soon on full display. “So we ended up letting it flow outside. We arguing,” the rapper explained. “So when we got outside, my ego got in the way — yelling and everybody was outside.”

The famed ATLien said that when his girl initiated the first throw, only a smidge landed on his face, which he admitted to eating. However, when he returned the throw, it landed on her face and all over her hair. “And the neighbor saw it, and the neighbor called the cops,” he recalled. The emcee said he was ultimately hit with a simple battery charge but confessed: “I totally deserved it because of the verbal abuse that I caused, that I said in front of the kids. Verbal abuse can also be worse than physical abuse. So it wasn’t like I didn’t deserve what I got.”

Dro also recalled speaking to a group of at-risk children who laughed at his now-infamous “banana pudding” charge. During their conversation, he highlighted an important message, telling them, “Anything can land you in [jail]. Keep your hands to yourself. This ain’t nothing to look over. It can escalate into something serious. It’s embarrassing.” The Atlanta star stated that “even in my moment of shame, I still put myself out there for the kids to see.”