“I took it personal because I’m the only artist whose put out five albums under G.O.O.D. Music,” Sean said about Kanye West’s hurtful comments on “Drink Champs.” 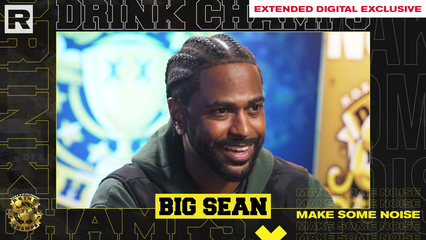 On the latest episode of “Drink Champs,” N.O.R.E. and DJ EFN sat down with Big Sean to discuss his career, discography, and the comments that Kanye West made about him after appearing on the show last month.

Originally born in Santa Monica, California; Sean relocated to Detroit with his family while he was just a baby. While in high school, he decided to become a rapper and would often participate in freestyle battles at local radio stations. In 2005, he got the opportunity to rap for West while the Chicago emcee was doing an interview for Detroit’s 102.7 FM. West was impressed by Sean’s skills and signed him to his G.O.O.D. Music label a couple years later. Sean released a string of mixtapes in the early 2000s and released his debut album, Finally Famous, in 2011. The project, which spawned the singles “My Last,” “Marvin & Chardonnay,” and “Dance (Ass),” debuted at No. 3 on the Billboard 200 list. Thereafter, he released a several projects over the years including last year’s Detroit 2, which topped Billboard and became the rapper’s seventh top 10 album.

In October, Sean announced via Twitter that he left G.O.O.D. Music to head his own record label. Though he explained to fans that he still maintained a brotherhood with his former label mates, West appeared on “Drink Champs” a month later and threw a few shots at the Detroit rapper.

To help give fans a recap, REVOLT compiled a list of nine facts we learned from the Big Sean interview. Take a look at them below.

It’s no secret that Sean loves where he’s from. He not only puts on for his city in his music, but he also frequently collaborates with artists from his hometown. When asked about his thoughts on the Motor City, the rapper discussed how its natives are unique. “I’ve been around the world and felt the city’s presence wherever I go,” he said. “It’s a city that’s been through so many tough times that you have no choice to authentically be who you are. You from the ‘D,’ so you have a built-in resilience.”

2. On Turning Down a College Scholarship in Hopes to Get Signed

Though West was initially impressed when Sean freestyled for him, it took a while for him to offer the Detroit rapper a record deal. In the meantime, Sean turned down a full scholarship to college in an effort to jumpstart his rap career. On “Drink Champs,” the rapper explained that during the time that he waited to get signed, he experienced depression, which he continued to battle years later. “Within that couple years when I graduated high school, I had a full scholarship to college that I turned down going off of the word,” he said. “I concentrated on the music and the shit was not going anywhere. Kanye and them are doing their thing. They were traveling and touring, but they were not getting back to me. I didn’t know what the fuck was going on and I gave up everything that I had going for myself. All my friends are up in college and I’m feeling like shit. It was feeling like I was stuck. It taught to get proactive instead of reactive.”

Sean explained that prior to recording Detroit 2, he continued to battle depression. He added that he had to do some soul searching and reconnect with himself to get back on track. “Why was I feeling fucked up? I wasn’t happy,” he said. “Why wasn’t I happy? I didn’t know, so I had to reevaluate and step away from everything that I was doing to get to know myself again. That was a challenge for me because everything that I was doing was linked to my career. I didn’t even know what the fucked I liked anymore. All my free time went to work.”

4. On Kanye West Telling Him to Fire His Homeboy

Early on in his career, Sean was called to travel to Hawaii to help work on West’s album My Beautiful Dark Twisted Fantasy. He explained during his interview that he hired his homeboy to travel with him during this time and work as his assistant. However, things went left when his friend got starstruck and posted a photo of West, JAY-Z, Beyonce and Sean working together in the studio. He added that West instructed him to fire his friend for the blunder. “I don’t know who saw it, but it got to either Ye or Hov’s attention and they came at me,” he said.  “I wasn’t even known at that time. I explained to him who it was and [Kanye] was like you got to fucking fire him. It ended up being a blessing in disguise. He ended up being a teacher and impacting a lot of people’s lives.”

5. On “Deep Reverence” With Nipsey Hussle

Sean’s album Detroit 2 was anchored by the single “Deep Reverence,” which featured Nipsey Hussle. On “Drink Champs,” he explained how he recorded the song with Hussle prior to the rapper’s death, but the two never got to finish it. As a result, Sean explained that he was initially unsure whether he should release it or not. “Hit Boy was like you got to finish this for bro,” he said. “I didn’t want to look like I was trying to take advantage of something. That was a song that I was reflecting on a lot of shit we be going through.”

West appeared on “Drink Champs” in November and threw a couple shots at Sean, stating that signing the emcee was the “worst thing [he’s] ever done.” West also accused his former cohort of working with the Democrats instead of supporting him during his presidential bid last year. During Sean’s interview, he fired back at West and said that he was the most successful artist on G.O.O.D. Music. “I took it personal because I’m the only artist whose put out five albums under G.O.O.D. Music,” Sean said. “Cudi left a long time ago, business wise. And they still clicked up and linked up. I’m the only one who put out back-to-back number ones. Platinum albums. And by the way, being signed to Kanye is a golden opportunity. He changed my life and I love him for that. But every time Kanye has called on me, within one day’s notice, I’m wherever he’s at. I’ve traveled all around the world for this man and not asked for publishing. Why? Because he gave me a golden opportunity.”

In addition to refuting West’s claims of supporting the Democrats during last year’s election, Sean revealed that he was also hurt to find out that his former label owed him $6 million, which he discovered after getting an audit done. “I had to spend my own money auditing my own label because millions of dollars are missing,” he said. “And you can tell when millions of dollars are missing. I spent hundreds of thousands of dollars thinking Universal owed me this money and the money had been paid to G.O.O.D. Music. It affected me personally.”

7. On His Next Chapter

Throughout the interview, N.O.R.E. asked Sean what he remembered about making many of his popular tracks. When asked about last year’s “Why Would I Stop?” he revealed that his motivation to create it came from thinking about the next chapter in his career. “You only lose when you stop,” he said. “I’ve done a lot of things that I’ve wanted to do. I remember I was with my mans and he was like, ‘What do you want to do?’ I do want to put more energy into a label. I do want to lend an opportunity and a platform.”

8. On Getting a Roc-A-Fella Chain

Over the years, many rappers have described that receiving a Roc-A-Fella Chain from JAY-Z is like a rite of passage. On “Drink Champs,” Sean told the story about how he casually complimented JAY-Z’s chain and the Brooklyn rapper later surprised him with one. “The day I got my Roc-A-Fella chain, I was in New York, and I dropped my second number one album,” Sean said. “I mentioned to him one time that his Roc-A-Fella chain he had was hard. [Then] he texted me one day and he was like, ‘What size you want?’ I remember he hit me. It just reminded me that the power of your mind is real. Niggas used to want that chain growing up.”

Later in the interview, N.O.R.E. rehashed Sean’s situation with his former label boss and explained his thoughts about West’s comments. “As a brother, [me and West] sat and hung out two days later [after the interview] and I know he didn’t mean any of those statements,” he said. “His statements were probably coming from a hurtful stance. We all are human. None of us are impeccable. What I want to say is the man is your brother. He loves you. I can’t speak for him, but I feel like he was hurt at the moment.”