“That unity mentality was stronger in the ’60s and a little before because we knew who the enemy was. It was obvious,” he explained on “Big Facts.” “We are now realizing who the enemy is. Again, it happens in every generation, every single time.” 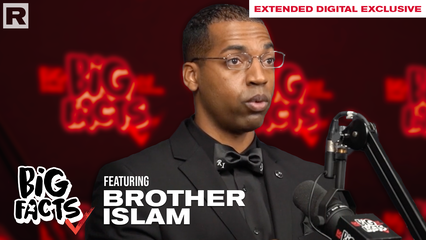 On the latest episode of the “Big Facts” podcast, hosts Big Bank and DJ Scream sat down with a well-known member from the Nation of Islam, Rizza Islam, otherwise known as Brother Islam. The often-considered controversial public speaker stopped by to share his thoughts on several issues including the Black community, COVID-19, and more.

Rizza wasted no time getting into some of his philosophies including the idea that individuals are more likely to be rewarded for doing wrong instead of something positive. The public speaker believes that people tend to have a false conception about the members of the NOI. “It’s a real-world we’re living in, you know, people think we fell from heaven. Bro, we from the hood like everybody else. Again, it’s a big stereotype,” he told Big Bank when asked if there was ever a time he felt like his faith was tested. “This world rewards you for being wrong, bro. They reward that. It’s hard to be, you know, right and straight as much as possible in the world. You get so many benefits for doing everything that’s negative — you get benefits for that.”

He continued, “Again, we’re not judging out people. We’re family. But, it’s like damn. To be right in the world, you get attacked for being right — for doing positive things. You get attacked. I can’t do this, but I’m cool if I do that.”

Rizza suggested that the government be considered a “gangster group.” “You talking about the real gangsters. They [the biggest gangsters] on the planet. So we messing with their money. We messing with the influences. So that is, I would say is [our] biggest haters.”

He also said his motivation to continue doing his work in the community comes from seeing positive images of Black people buying property, investing, and other things that would eventually push them further in society.

However, support behind community leaders such as Rizza has lessened since the Civil Rights Movement when people would march behind activists such as Martin Luther King Jr. or Kwame Ture.

Rizza believes that support has died due to several factors including “drugs, mass propaganda and mental manipulation of the people over time, and certain lifestyles that were injected into our community that don’t necessarily come from us originally. The self-hatred.” He added, “All these things that help to break us down, to destroy our power as a collective — that unity mentality was stronger in the ’60s and a little before because we knew who the enemy was, it was obvious.”

However, the outspoken figure believes there is a resurgence in support of community leaders. “We are now realizing who the enemy is. Again, it happens in every generation, every single time,” he continued. “We ain’t the enemy, but I will say our ignorance is one of the biggest.”

Elsewhere, he shared his thoughts on COVID-19, alleging that the virus was a collaborative effort secretly used a depopulating method and that citizens are being “pimped.”

“For some reason, we get confused now because they got a white coat on, they say ‘MD, I’m this,’ no you a damn liar too. You a pimp with a white coat on. That’s the difference,” he explained. “You playing us the same way the dude on the corner did us. You pimping my mama the same way the church did and some mosques and other places too.”

Last March, McGill Office for Science and Society released a report of the “Disinformation Dozen,” a group of influencers they alleged were responsible for notoriously spreading misinformation about COVID-19. Rizza and Kevin Jenkins were described as “more troubling” than any other candidate on the list.

It slammed Rizza’s since-deleted “Not Another Tuskegee Experiment” Instagram account, which compared the use of the COVID-19 vaccine in Black people to the unethical study of the syphilis treatment now referred to as the USPHS Syphilis Study at Tuskegee. Between the 1930s and 1970s, roughly 400 Black men were injected with the disease and left untreated although penicillin was widely available by 1943.

Rizza called it a “hit list” and highlighted that he was only one of two Black people on the list before calling out some of the changes in the information given to people since the start of the pandemic, including ways to prevent the contraction and spread of the disease as well as benefits of the vaccine he said calls for concern.

The Center for Disease  Control and Prevention states, “High vaccination coverage in a population reduces the spread of the virus and helps prevent new variants from emerging.” It also says that all “vaccines and immunization web content are researched, written and approved by subject matter experts, including physicians, researchers, epidemiologists, and analysts. Content is based on peer-reviewed science.”

If you liked what you heard, be sure to stay tuned every week for new episodes of “Big Facts.” Also, don’t forget to watch the latest show above!

Tags in this article:
Tags
Brother Islam
Nation of Islam