“I started spending my money on shit that makes me money.” These are the opening words from Soulja Boy, this week’s guest on “Assets Over Liabilities.” 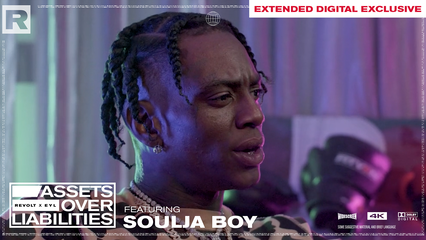 “I started spending my money on shit that makes me money.” These are the opening words from Soulja Boy, this week’s guest on “Assets Over Liabilities.” Our hosts, financial advisor Rashad Bilal and educator Troy Millings of the “Earn Your Leisure” podcast, take viewers inside the home, business mind and finances of the 31-year-old rapper.

He sparks a blunt as the guys kick off the interview. Rashad first asked about the rapper’s experience going viral as a teenager. Big Draco went on to tell us how he used the internet to hack his way into the music industry. He explained how he sold his songs online using “SouldClick,” an early streaming service in place of traveling to New York hoping to land a meeting with a record executive. He built his fanbase and distributed his music for himself. “I was making 10 bands a day in high school,” he said.

The teen-rapper-turned-mogul also shared how he turned his local notoriety into a cult online following using battle rap. In high school, Soulja Boy gained early fans in his classmates by shocking them with witty punchlines. These battles kept the young entrepreneur in school, and the kids at school began to translate into online fans. He explained how he followed the social media trends early on when he shared that he remapped his SoundClick page to his MySpace account when the platform first launched. This switch helped him to become the No. 1 artist on the social network before he jumped on the YouTube wave with “Crank That (Soulja Boy)” — his mainstream breakout debut.

“I was the first rapper to get paid on YouTube,” Soulja Boy said as he remembered how he trolled his trolls in 2006. The star recalled how he would get hateful comments everyday on his videos, so he decided some trash talk would solve the issue. It seems like his strategy solved more than one. “I started that shit,” he said about getting paid on YouTube. “One day I told all my haters that I get paid 5 cents for each view. I was cappin’, but the hate stopped.” Only a few months after this, did YouTube introduce the partnership program allowing creators to get paid through ads.

After 27 million views, Soulja Boy was offered the record deal he’d been waiting for. At just 17 years old, he signed to Interscope for $1 million. “I was already damn near rich,” he explained, but the advance felt good to get in a lump sum. “I was street rich. I was hood rich. I was just famous from the internet,” he said. “I didn’t sign for the money, I signed for the fame.”

During the interview, Soulja Boy also remembered how he spent his first few bands. “When I first got on bought a house in ATL. $1.2 million in straight cash,” he said before talking about the infamous shootout that forced him to move out of his new home. An unexpected occurrence that he didn’t account for, and for his own safety, the rapper took a loss when selling the home so quickly. “That asset became a liability,” Troy said and Soulja Boy agreed.

Learning from past lessons, the business savvy rapper talked about his investments into other business ventures like The Soap Shop, which saw a huge profit amidst the pandemic due to a greater interest in personal hygiene. He’s also shown great business timing and finesse, such as making the pivot into tech.

“My  greatest accomplishment is his video game console that can be used as a computer and phone,” he told the hosts about his system TRDR Pocket. “They trying to buy it from me,” he told the guys. “They offered me $100 million. The first offer was from Google. Second offer was $140 million from the CEO of Square. When you get in the tech space and you’re moving over $100 million things are different,” he admitted while explaining that he has made the decision to sell his company to the third, undisclosed, offer.

While still very much concerned about his ownership in the company after the acquisition, Soulja Boy still found the bright side. “They found me,” he said about his accomplishment. “I sourced this console myself. I was over in China looking for it. I was multitasking. Booking shows and when I get off the stage I’m looking for the factories,” he shared to inspire other artists to venture into new fields.

Soulja Boy doesn’t stress about how to make money because he said he came from nothing. “I came from section 8. Food stamps, EBT cards, welfare,” he said. “Anything past that is a win. So that first million dollars was a win. Twenty thousand a show. That 20 million downloads a day. $1 million advance. Royalties in the millions. That’s blessings from God.”

As for what’s coming up next for Soulja Boy, the boss said people can expect TV shows and movies from him in 2022.” I’m going to have the biggest record label in the game,” he also said.

Watch more in the latest episode of Assets and Liabilities above.

Soulja Boy steps into the "Metaverse" with new single

Soulja Boy gives advice to aspiring rappers: "You got to have both feet in"