On this week’s episode of “Love and Respect with Killer Mike,” Renee Montgomery shares how she took her ownership of the basketball team from a dream and to a reality, and the legacy she wants to leave off the court. 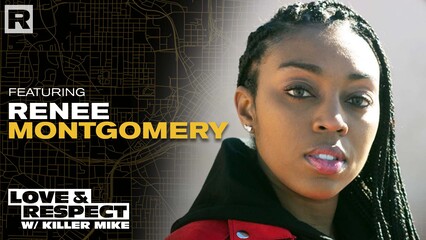 For two-time WNBA championship winner Renee Montgomery, when it was time to walk away from the game she knew and loved, she decided it needed to be for the right reasons. She shares, “When I opted out of the WNBA in 2020, I wanted to make a big impact.” When her wife, singer-songwriter Sirena Grace, mentioned that the WNBA’s Atlanta Dream might be looking for new ownership, the newlywed didn’t know it at the time, but that new ownership would include her. On this week’s episode of “Love and Respect with Killer Mike,” Montgomery shares how she took her ownership of the basketball team from a dream and to a reality, and the legacy she wants to leave off the court.

Montgomery didn’t start life with the aim of being a sports team owner. The former Minnesota Lynx point guard was born and raised in Charleston, West Virginia, and although she would go on to be an all-star player, it didn’t start that way. She says, “I fell in love with trying to be better [as basketball] because I wasn’t good when I started.” She goes on, “I fell in love with trying to earn minutes, trying to become a part of a team, and then trying to become a main character on the team.” Despite her slight stature (she’s 5’7”), the point guard was a tenacious and forceful player on the court, leading the Minnesota Lynx to two WNBA championships and the Atlanta Dream to the 2018 finals. But she wasn’t content just making waves on the court.

During her time at the University of Connecticut, the star scorer — who still holds the sixth spot for assists in women’s basketball — chose to major in communications, recognizing those skills would come into play throughout her life. She says, “communication is everywhere, in every business.” The UConn graduate took her talents to Fox News and ESPN, covering the Atlanta Hawks’ games and the 2021 NCAA Women’s Basketball Tournament, respectfully. Appearing on camera isn’t just about finding something to do post-retirement for the regular commentator. She wanted to be a face that young girls could identify with, and help usher in the next generation of players and broadcasters.

Her historic rise to team owner gives young girls yet another avenue for women basketball players. When Montgomery became co-owner of the Atlanta Dream, she also became the first former player turned owner and executive of a WNBA team. She shares, “I was talking to [Phoenix Mercury player] Diana Taurasi at the NBA all-star game in Chicago about what I was doing after my career.” Possible team ownership was kicked around during the conversation, but she did not think it was possible. After talking to her wife and team, they decided to pursue her dream seriously. She says, “I can’t take ownership about owning the Dream without mentioning my team. Everyone around me confirmed it and saw me as the owner.” Her two co-owners fell into place, and in February of this year, the change in ownership was approved. However, with COVID still raging, the work was not done.

The WNBA’s player-led campaign and programming have helped the league achieve a 99% vaccination rate — months ahead of the NBA’s recent 95% vaccination rate, which includes players “in the process” of getting vaccinated — which doesn’t surprise the Dream owner. She says, “We’re (the WNBA) made up of the minority, we’re used to having to stand up for stuff, and when you have a large group of women, all educated, all who understand what’s going on, stuff gets done.” The former WNBA All-Star honoree is no stranger to advocacy and social justice. She opened her foundation, The Renee Montgomery Foundation, in 2019 to help increase the community’s involvement in local politics. On her own, Montgomery, the child of two HBCU graduates, advocates for funding and programming at HBCUs and took part in More than a Vote, a group of Black athletes and artists co-founded by NBA superstar Lebron James to help address voter suppression. Voter suppression and social justice hit close to home for the mother of one, who openly shares her struggles with explaining racism to her young son. She says, “Raising a son in this environment, a Black boy, it’s difficult. He is so innocent. He’s still asking, ‘Why did they attack Ahmad Aubrey?’ I don’t want to take away his innocence, but he needs to be aware.” For Montgomery, her work in the community is personal.

And she’s got her work cut out for her. Even though the team co-owner, wife, and mother achieved a lot in her 11-year career, earning WNBA All-Star honors in 2011, and was named the WNBA’s Sixth Woman of the Year in 2012, that was just the beginning. When asked about her lifetime mission, it’s  bigger than sports — more significant than any one team. It’s about all of us. She says, “My legacy is the advancement of women and minorities in whatever avenue they are pursuing.” If her time as a leader in West Virginia, Connecticut, and now Atlanta are any indicator, for Renee Montgomery, it’s simply a matter of time before she solidifies that legacy.