Big Bank and DJ Scream are always up for a discussion surrounding entrepreneurship. During the latest episode of the “Big Facts” podcast, they sat down with the founder of the marketing and consulting firm Checkmate Sports and Entertainment Edward Davis. 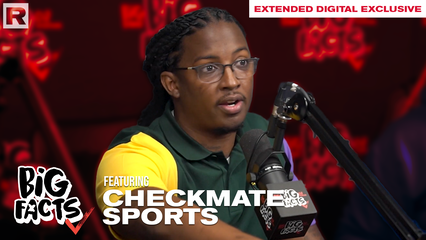 Big Bank and DJ Scream are always up for a discussion surrounding entrepreneurship. During the latest episode of the “Big Facts” podcast, they sat down with the founder of the marketing and consulting firm Checkmate Sports and Entertainment Edward Davis. The businessman stopped by to discuss being a sports agent, working with young athletes, and more.

Davis revealed he was inspired to take the corporate route after watching his father, rapper Big Deuce, maneuver throughout the entertainment industry. “He started out with Suave House, So So Def, and all that and just seeing him. He was basically giving me the game at such a young age, like, ‘Man, the music industry ain’t really what you think it is,’” the businessman explained. “So instead of it turning me on to try and get into it, I’m like, ‘All right, so pops you did this, you giving me the game I’ma go ahead, and I’ma go this way.”

The Stone Mountain, Georgia native has since found success in his career decisions. Since launching his company in 2019, Davis has sent a few athletes to the NFL draft. Some of his clients include Indianapolis Colts’ recent addition, cornerback Travis Reed; and New York Giants’ Christian Angulo. The results are impressive, especially after Davis found himself having to market an up-and-coming company and clients during the height of the pandemic. However, the entrepreneur said it wasn’t without its difficulties.

“I think in any industry when you’re Black — especially when you go into industries where we’re not known — if you’re starting a record label, cool,” he said. “When see Birdman, we’ve seen people who done did it. But when you get into the sports world,  good old boy network, it’s a little difficult.” Davis said he even found his Black peers resistant to helping him push further in the industry.

“And that’s why I had to launch Checkmate Sports because I was interning for other agents trying to get it, but they would always ‘little brother’ me, and they would just make me do BS work. Microsoft, Excel, stuff like that, so I said you know what? I’ma just stack my bread up and then we took off with Checkmate,” he continued.

Davis admitted that working with burgeoning athletes has its troubles, much of which the agent said is fueled by ego. But, he acknowledged that being in the league does come with its pressures. Furthermore, Davis explained that athletes often find themselves in trouble due to a lack of guidance in an industry they know little to nothing about.

Halftime Report | How Overtime Elite is changing the game

“When you get into the industry, you start realizing that it be the handlers, the middle man, the mom, the dad, the cousins who are more Hollywood than the actual athlete,” the agent revealed. “That’s the stuff you have to deal with as an agent. You try and talk to a player — they locked in on football, they locked in on basketball or whatever — but then you have them say, ‘Here, go talk to my uncle, go talk to my dad.’ So, now you gotta go talk to the dad who already talking to three other agents who may promise them a job or who may promise them x-amount, it’s a lot of stuff—similar to the music industry. Instead of them rapping, they just catching a football.”

According to Davis, when it comes to choosing a sports agent, much like choosing legal representation, it’s all about trust. However, when the business relationship no longer is thriving, Davis said it’s just as important not to take it personally.

“That’s just a part of the business, and you treat [it] just like you treat a relationship with your significant other,” he explained. “There’s always going to be someone trying to get at them, but if you doing your job and doing right by them all, you could do it. Just trust and hope that they’ll do the right thing.” However, that’s not to say strategies are not put in place to ensure agents are compensated for money and time invested into clients should they choose to sever ties.

Davis said the key to being a good sports agent includes always keeping a certain professional level between you and your client. “Sometimes agents or people who whined up getting into the industry wanna be the friend; they want to be the buddy—they got enough friends, they got enough buddies. They need somebody that they can trust when shit hits the fan. They want to make sure my agent knows what he is doing. my agent [is gon’] stand on the table for me. He gon’ protect me. So as long as you are being a professional and doing right by them, not lying, being upfront with them, I think that’s the best practice.

Elsewhere the group broke down some of the changes in college sports including the NCAA’s NIL rule update that now allows student-athletes to be compensated for their name, image, and likeness.  Davis said those rules changes also made it possible for agents like him to gain access into a very exclusive club. Initially, individuals had to have a specific college education level to take the test required to become a sports agent, but now that is no longer a requirement.

“But the industry don’t want you to know because, of course, they want to keep making all the money,” Davis revealed. “So with the new law that pass on July 1, that allows student-athletes to get paid, all you have to do is go through a certification process.” With the new adjustments, Davis hopes that his business can further help athletes on the college level make it to the professional league or at least earn some catch with the talent that they do have on a collegiate level.

If you like what you heard and want to know more about Davis’ business, be sure to stay tuned every week for new episodes of “Big Facts.” Also, don’t make sure to watch the latest show above!