Tyler Perry perfectly explains why he's thankful for all his failures

What separates the success stories from the failures? For award-winning producer, director, writer, and actor Tyler Perry, it’s sheer perseverance and divine timing. During the second part of a special two-part episode of “Love & Respect with Killer Mike,” the multi-media tycoon discusses his journey to the top, his tremendous work ethic, and what’s next. 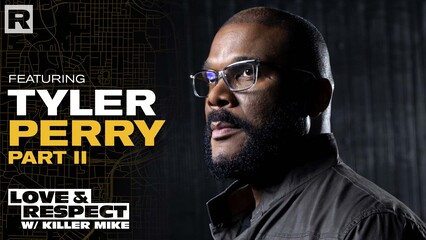 What separates the success stories from the failures? For award-winning producer, director, writer, and actor Tyler Perry, it’s sheer perseverance and divine timing. During the second part of a special two-part episode of “Love & Respect with Killer Mike,” the multi-media tycoon discusses his journey to the top, his tremendous work ethic, and what’s next.

Though success seems to come both easily for the studio owner, he’s quick to share with host Killer Mike that that was not always the case. He says, “After seven years of the shows failing, I went to the 14th street playhouse here in Atlanta. It was March 1998, and the show sold out. Then the Fox theater? Sold out. All 4,500 seats.” The “show” in question was “I Can Do Bad All By Myself,” the play that launched his now multi-million dollar entertainment empire. For many years, the former playwright paid for the production of each play by himself, and took on the lion’s share of the work — writing, directing, promoting, and eventually starring as Madea. That work took a toll on him both mentally and financially. He’s not ashamed to share that at one point he was flat broke, surviving off of packaged grocery store cookies for weeks at a time.

The media mogul acknowledges that his humble beginnings are what spurs his spirit of giving — whether that’s through his foundation or on his own. After years spent living without, it’s easy to empathize with others. “When we talk about being able to put yourself in someone else’s shoes? I’ve been there,”  he tells Killer Mike. “There” includes his origins in New Orleans. A Big Easy native, Perry is quick to point out that for people from the city like himself, it wasn’t all Mardi Gras and Laissez les bons temps rouler. He adds, “Coming from New Orleans, you had to hustle to survive. I think that mentality truly comes from the very culture of the city.” He also credits his father with his work ethic. The creative says, “One thing my father gave me, the man had the most stupid work ethic.” Whether it was rain, sleet, or snow, his father worked. And despite the fact that the pair no longer speak, he continues to provide for his dad, considering it payback. Perry says, “Financially we were never hungry, and the lights were never off, so I give him that. I feel good about that.”

There is so much more for the Atlanta transplant to feel good about. Perry’s film studio, one of the largest in the country, isn’t just historic, it provides for the Atlanta economy, and the city has Former Mayor Kasim Reed to thank for that. “I called Kasim, I was going to leave the city…I wanted land, I wanted more space,” he continues. It was Reed who introduced the filmmaker to Fort McPherson. At 487 acres, the decommissioned US Army base was perfect for a functioning film studio. And in 2006, Tyler Perry Studios opened, providing jobs to residents in the East Atlanta area and beyond. All of that came from ownership. Even while working for others to help finance his plays, Perry says he made sure to own his work. He says, “If you’re starting a business, or even working for someone else, ownership is where it all begins.” He likens ownership to a tree trunk, and all of the branches (plays, movies, shows, etc.) spring from it.

So what is the next branch on the Tyler Perry tree? His legacy. “Everything is about my son, whatever he wants to do. I just want him to be an incredible man,” he says. The father-of-one also keeps his eye out for fresh talent to invest in. Perry adds, “It’s very much about who is next? I am looking for those kids, who are special, and different and unique.” Feeling a special connection with these future mavericks-in-the-making, the producer says he is specifically looking for kids who have been “ostracized, and criticized and [have] gone through hell” because he has gone through it, and he knows what it takes to get to the other side. Perry has failed, and he’s grateful for it. “All of those moments leading up to it [the March 1998 show]…I thought I was failing. Every moment was preparing me to be the person I am now,” he says. That person is a “dream confirmed,” an owner, a hustler, a philanthropist, a visionary, and an extraordinary talent. A success.

Tyler Perry is officially a billionaire