Nardo Wick says working a 9-to-5 is “torture” 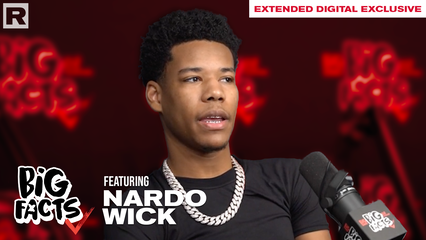 Big Bank and DJ scream return with another episode of the “Big Facts” podcast. On this week’s show, the group sat down with rising star Nardo Wick. The Florida based artist was thrusted into fame after finding success with his record “Who Want Smoke” and has since garnered co-signs from artists including Lil Durk and G Herbo. On the latest episode, Nardo discussed his new found fame, artists freestyling to his records and more.

Florida has produced some of the biggest names in rap music, including Rick Ross and Trick Daddy who hail from Miami, as well as Kodak Black, Ace Hood, and the late XXXTENTACION coming out of Broward County. So, it’s no secret that the next act coming out of the southern state would need a unique sound in order for them to gain traction.

When asked how he went about ensuring his sound stood out from the pack, the Jacksonville native credited his voice. “I ain’t really do nothing. That’s just me. That’s how I rap. That’s just what I came up with,” the “I Be Chillin” emcee said. “It never was no strategic thing. I just never really been heavily influenced by the Florida sound.”

Before music became his passion, Nardo was heavily into football and played it as a young athlete, but revealed that he quit because it would’ve taken him too long to achieve success. Also by then, roughly around his early teens, Nardo said he was more interested in street life and knew his passion would eventually find him creating music.

Later on, Nardo, whose real name is Horace Bernard Walls III, addressed reports of him being arrested by US Marshals last August. Video footage went viral this summer that showed the rising rapper and another man laying facedown on the pavement as officers surrounded them at gunpoint.

However, the “Pull Up” rapper revealed that law enforcement agents were actually looking for his brother on alleged murder charges. “They was coming for him, but we was leaving the hotel. We were coming to Atlanta and we were getting in the car with our bags and they all hopped out on us, but it was only for him and they weren’t even supposed to fuck with me,” the rapper explained.

Nardo said, at the time, he had a gun and some items including jewelry in a bag that he subsequently dropped when approached by authorities. The star explained that because they were unlawfully detained, charges against him were dropped — though he said police still have his jewelry.

Elsewhere, the “Shhh” emcee addressed other rappers freestyling to his songs. Since the release of “Who Want Smoke,” the song has gone viral on TikTok thanks to its “stomping” break and “What the fuck is that?” line.

The record received a remix treatment featuring G Herbo, 21 Savage and Lil Durk with its visual currently sitting at 39 million views on YouTube since its debut in October. Big Sean also delivered a hot freestyle performance to the beat during a recent appearance on LA Leakers.

Still, Nardo isn’t bothered by other emcees using his tracks. When asked who he thought had the best take on the song, the rapper found it difficult to decide, telling the hosts, “…all of them slid in they own way.” He added, “Every time I listen to it and a different part comes on, I feel something different on all that shit.”

Speaking more on his upbringing, the artist revealed he never once held a traditional 9-to-5. “I just feel like it’s torture. Like, you gotta wake up at a certain time. You gotta be there,” the rapper said. “You go there and someone tells you what to do and you’re going to listen or you’re going to get fired. Naw.”

However, he didn’t shun the concept entirely, stating that it’s an option for anyone unwilling to resort to crime, but it’s just not his preference. The artist credited his mindset to his upbringing and coming from a line of hustlers before revealing his momager did some time behind bars for alleged fraud. As a child, Nardo said he was very observant of his surroundings and quickly picked up certain dealings.

He also wants to give back to his hometown, stating that one day he hopes artists from the area would “put they pride to the side for a day” and put on some sort of event for the community.